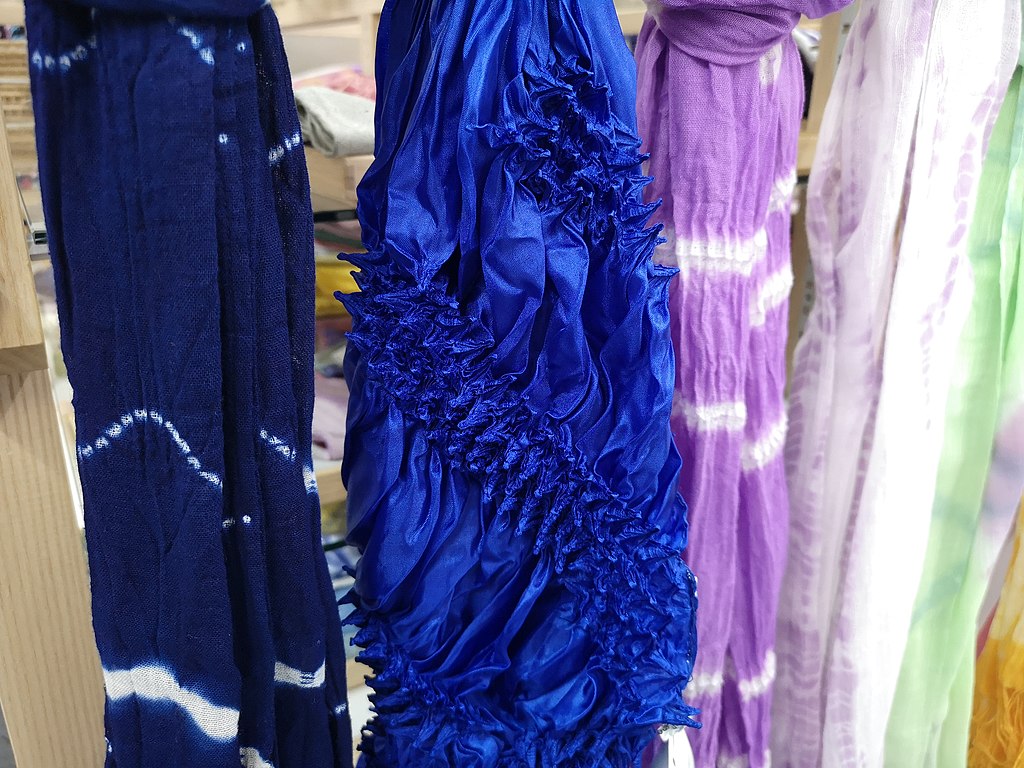 Although most people associate tie-dye with 60s hippie fashion, it’s also a traditional art in Japan. However, shibori is quite different from Western tie-dye. For one thing, pieces are often far more detailed. For another, it has a much longer history. Shibori dates back to at least the 8th century, although it was most popular between the 17th and 19th centuries.

The word shibori means “wring” or “squeeze,” which expresses how the dyeing technique works. Fabrics were traditionally silk or hemp, but later practitioners also used cotton. Originally, ink for shibori was usually indigo but occasionally madder or purple root with each piece just a single color. The practice today, though, can use a full spectrum of colors.

One of the top museums in the city, Kyoto Shibori Museum is the place to go to learn about this art form. The museum offers several different shibori classes ranging in length from half an hour to three hours and varying in difficulty. When you book a shibori class, you also receive free entry to the museum exhibitions.

One of the simpler workshops (rated three out of seven for difficulty) is sekka shibori. It uses the itajime technique, which involves tying fabric around an object. In this workshop, you create a flower pattern (sekka means snow flower) on a silk georgette scarf. This is a top choice if you want to be surprised by the results.

Another workshop where you make a silk georgette scarf is the itajime class. The difference with the sekka shibori workshop is you can choose from a range of shapes, which means the results will be even more unexpected.

For something a little more challenging consider the kyo-arashi class. Arashi shibori is another traditional technique, but it involves twisting fabric around a pole to create a pleated pattern. In this class, you’ll again make a silk georgette scarf.

A second sekka shibori class is the furoshiki workshop. Instead of a scarf, you’ll dye wrapping cotton. You can use this versatile piece of fabric to wrap a gift.

One of the more difficult (but also one of the most traditional) workshops is the fukusa class. You’ll dye a silk rinzu cloth that is used during a Japanese tea ceremony. This class lasts longer than the ones above as you need to hand stitch the fabric before dyeing it.

For the ultimate challenge (seven out of seven in difficulty), take the premium class. This is also one of the most traditional workshops. Lasting three hours, you’ll see a demonstration and then bind, dye, and unbind your fukusa cloth. The results are always surprising.

As the earliest known piece of shibori was donated by Emperor Shomu to the Todaiji temple in Nara, it’s certainly fitting to practice shibori in Kansai. In fact, the Kyoto Shibori Museum is the most important center of shibori in the country. Having the chance to practice the art as well as viewing pieces by artists will undoubtedly bring the craft alive for you.