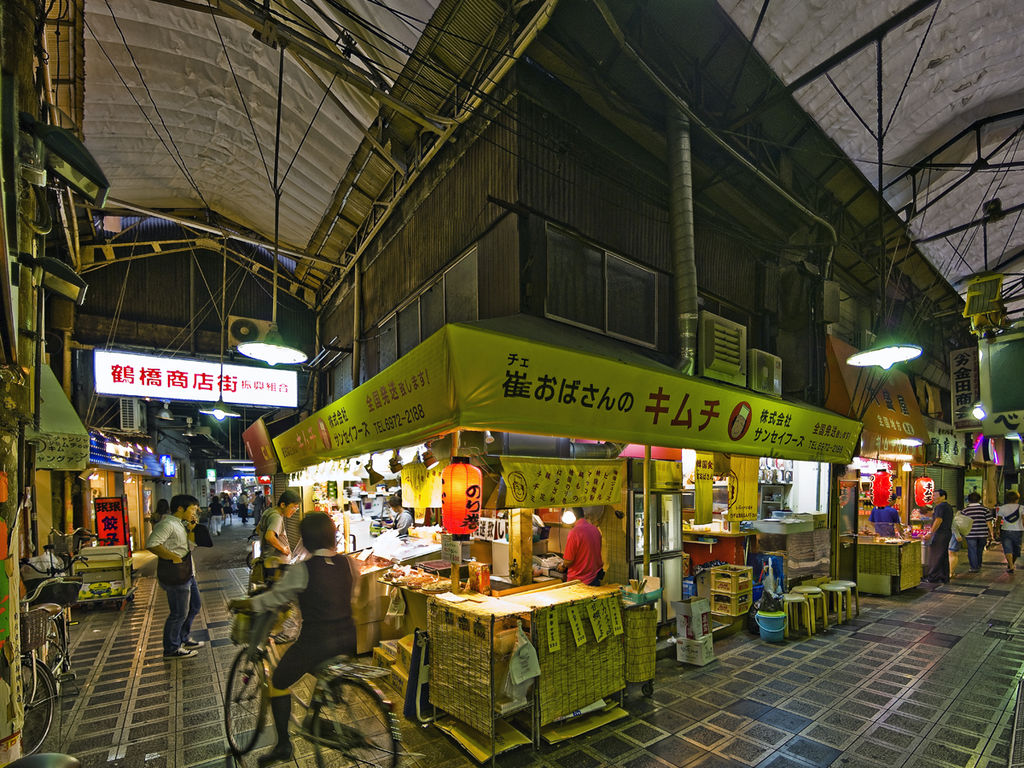 Koreans have long congregated to the Tsuruhashi section of Osaka making it Japan’s largest Korea Town. There are some 90,000 residents here, about a quarter of whom are emigrants from both North and South Korea. The community also harbors Korean nationals that emigrated from a once-unified country that no longer exists. These folks are given the choice of claiming South Korean citizenship or Japanese citizenship. Regardless of their origin story, most business in Tsuruhashi, while decidedly Korean, is carried on in Japanese.

What you can find in Tsuruhashi?

Start with food and that means kimchi. The national dish of Korea, an amalgamation of pickled vegetables, is so important to Koreans that it comes up in international negotiations. The best kimchi in Osaka is in Tsuruhashi and varieties abound at the numerous market stalls and food shops.  Once you have sampled Tsuruhashi kimchi, you are likely to forego the typical supermarket offerings in Japan.

Between the cafes, stalls and street food vendors, there are more than 150 eateries to work your way through in Korea Town. An entire street has been given over to Korean grilled meat offerings known as yakiniku. These bite-sized pieces of BBQ use all sorts of cuts of meat. Pajeons, Korean pancakes stuffed with fresh vegetables, can work as a grab-and-go item or the foundation of a meal.

Everything Korean is on sale from cosmetics to instant noodles to traditional Korean garb such as wedding gowns and colorful hanboks. And especially anything relating to the newest and hottest K-pop band. If a piece of merchandise can be adorned with a fresh-scrubbed face of a K-pop idol, you will find it in Tsuruhashi.

While the shops close early as is the custom in Korea, life behind the traditional-style Korean gates never shuts down – Tsuruhashi hops 24 hours a day. Miyukimoriten Shrine, the official entrance of Korea Town, is a short walk from Tsuruhashi station on Osaka’s JR Loop Line.