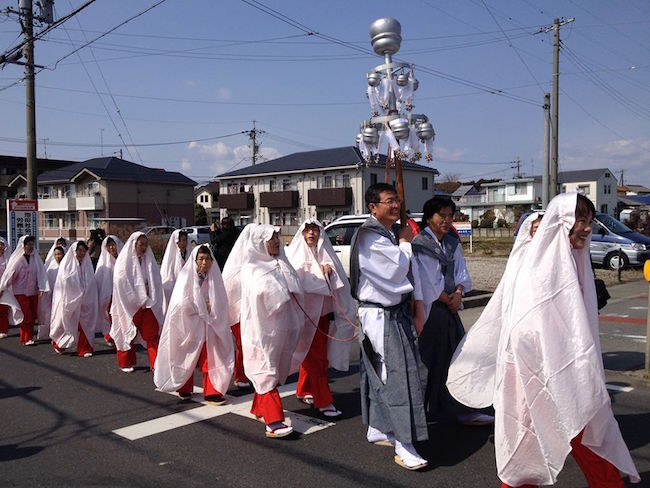 If you have spent any time in Nagoya or its surrounds, then it is a good chance that you have heard of the Hōnen Matsuri harvest festival at Komaki. You, know that one. The one with the huge phallus that gets paraded around the city streets and everyone goes a bit willy-wild. Yeah, you know, a.k.a. ‘Penis Fest’.

I remember when I first came to Nagoya and read an article online about the Hōnen Matsuri, and below the line some commenter complained that, how like Japan it was, sexist beyond belief, celebrating the potency of the male parts, yet there was no festival celebrating the woman’s contribution to fertility. It was a good point. Or at least it would have been, had the commenter been right about there being no female celebration. Because there is, one stop down the train tracks, no less.

In fairness, its not surprising that the commentator didn’t know about the Hime-no-miya Honen Matsuri held in Inuyama’s Oagata Shrine, because not that many people do. However, to my mind, that’s one of the things that makes it a little bit special. Held annually on the Sunday prior to March 15th (in 2018 that will be March 11th), the festival is held to pray for a good harvest and prosperity in the coming year. Oagata is said to have been a place of worship since the year 3 BCE, with the present shrine reconstructed in 1661 that has since been designated as one of the nation’s important cultural properties.

While Oagata shrine is devoted to a ‘kami’ god of the same name who is said to have founded the Owari region, within the connected sub-shrine Ninomiya is enshrined the goddess Himenomiya (also known as Tamahime-no-mikoto), the guardian deity of women, to whom prayers are offered for marriage, pregnancy, safe birth, happy conjugal life and matchmaking. The festival that celebrates this guardian goddess of women begins at 9:00, with various shinto ceremonies taking place throughout the day, but the parade, the main attraction, begins at around 13:00, setting off from Morokuwa-jinja. The parade is led by Sarutahiko, a tengu kami of showing the way, and features unmarried women and a vaginal symbol made of pink rice. The parade makes its way up the hill towards Oagata shrine, with various portable mikoshi shrines being carried, as well as a colection of elderly women dressed in flowing pink robes designed to look like walking vaginas.

As the parade reaches its conclusion at the shrine, for some reason (I can find no written explanation as to why) members of the parade carrying huge brightly colored bamboo poles race up the steep climb to the shrine to the cheers of the gathered locals. With the parade completed there is a chance to wander around the ancient shrine. Behind the shrine you will find Musuhi Pond, where unmarried women (though nowadays it is acceptable for men too) can write their wish on a piece of paper, float it on the surface of the water and pray for a good match in marriage.

Also there are various vaginal-shaped rocks at which you can pray, and a tiny torii gate through which you can crawl and be ‘reborn’. But at the latter, be warned, if you are a non-Japanese, you can expect by performing this ritual you will garner quite a bit of attention from the camera-toting ojisans who are likely to be surprised to see a foreigner at the festival. Oh, and it’s certainly Japanese-sized. If you are an average-sized westerner, you may find it a bit of a squeeze. The festival concludes at 16:00 with the traditional rice cake throwing ‘mochinage’ event. Until then there are plenty of food stalls at which to indulge in candies and cakes in the shape of female body parts, musical performances, and a beautiful garden filled with various shades of plum blossom trees.

The the Hime-no-miya Honen Matsuri is by no means the biggest of festivals in the area, and it is certainly not the most famous. However, with so much celebration of the fertility power of the male anatomy in Japan, it is perhaps quite an important one. Yes, it will not draw the huge crowds of foreigners that will be found at the associated festival down the road at Tagata Shrine, but this means that it is a great chance to see something that not many others will, while indulging in a bit of feminist pride. For a full schedule of the festival, go to the always excellent Kikuko-Nagoya.com website here.

Images by Mark Guthrie (own work)