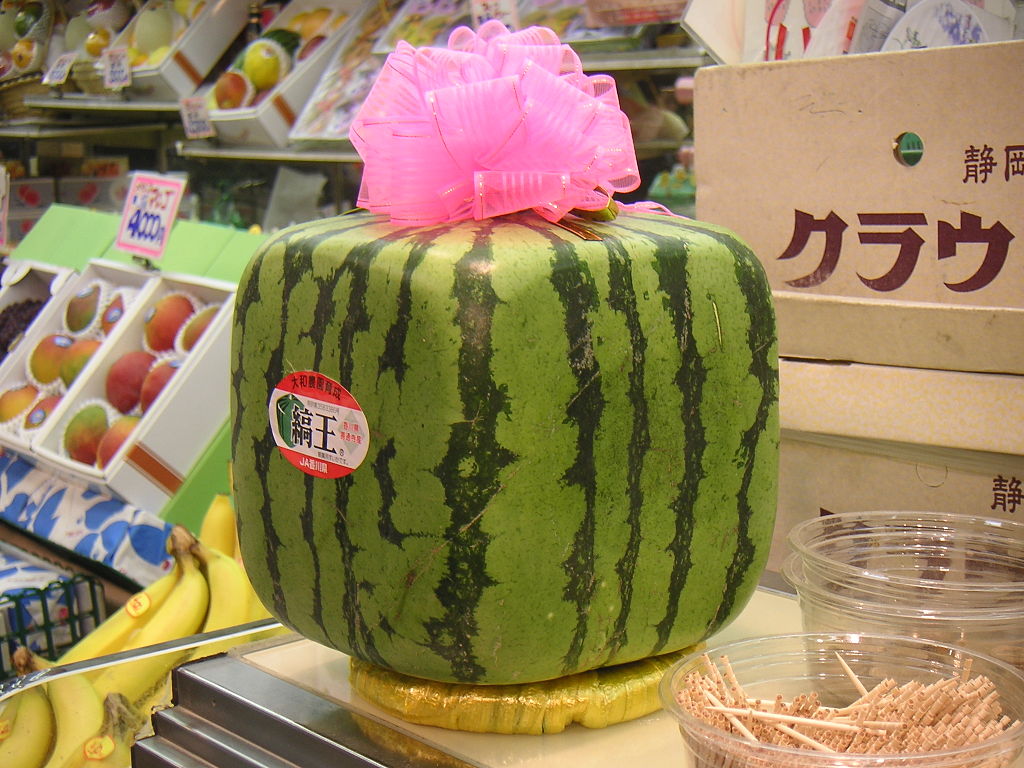 There are quite a few things that evoke the saying, “Only in Japan.” Fruit as a status symbol is one. Like many things where those in other cultures go dully about their business, the Japanese have instead raised the growing of fruit into an art form.

The lust to produce a specimen that is cosmetically perfect is so strong that farmers will place a protective bag around each blossom once it is fertalized. The result is that fruit comes into the home as often in a gift box or wrapped in a bow as it does in a grocery bag. Let’s look at some of the superstars in the Japanese fruit world:

These prima donnas are grown only in the town of Yubari, Hokkiado. The melons are normal sized but must be perfectly round. That means perfectly round. Plenty of fruit is wasted that is not a miniature bowling ball. But that is not enough – the stem of these pricey melons is left on and forms a perfect “T” shape. Again, that word “perfect” is a must. When a pair of ideal Yubari melons goes up for auction (they are sold in pairs) bidders go into a frenzy. The record bid is over three million yen.

These beauties come from Ishikawa Prefecture and don’t even begin to talk about your grapes unless they have a sugar content of at least 18% and weigh 20 grams each. That’s about the size of a ping-pong ball. For a grape. Sometimes you can count the number of yearly crops that make the cut on two hands. The Ruby Roman is a relative newcomer to the fancy fruit game. It was cultivated only in 1992 from seeds of the Fujiminori variety. The first grapes went up for sale in 2008 and fruit lovers have been swooning ever since. In the summer of 2016, a bunch of 30 Ruby Roman grapes sold for 1.1 million yen, more than 30,000 yen each.

This is an architectural case of form following function. It is simply more efficient in a space-starved country like Japan to have a square melon that takes up less room in the refrigerator. But it costs a lot of money to grow watermelons in glass cubes so Japan’s square watermelons often end up as decorative ornaments (they are favorites of gift-givers during humid summer ochugens) then split open at a picnic. Japanese farmers never tire of breeding fruit in geometric shapes – be on the lookout for pentagon-shaped oranges, pyramid-shaped melon and more.

The Densuke watermelon is a looker as well with its sharp black skin but it is valued more for its unreal sweetness. That and the scarcity of its taste – only about 100 Densukes are harvested in the typical crop each year in Hokkaido, Japan’s northernmost island. That is the only place where it grows. Whereas individual standout Yaburi melons can fetch higher prices at auctions, the Densuke is the world’s most expensive everyday melon. You can find them in stores for the bargain price of 20,000 yen but bring a bigger checkbook to bring home a premium Densuke at auction – think more like 500,000 yen.

Southern Japan is not without its own brand of fruit insanity. Each individual mango of this variety, sold under the brand name of “Egg of the Sun,” must pass strict requirements for weight and sugar content (very high). If the fruit passes and makes it to auction, have your paddle ready – bidding for one pair from Miyazaki Prefecture didn’t stop until it cleared 300,000 yen.