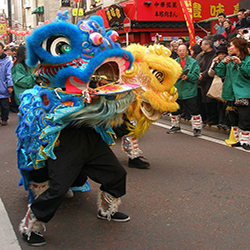 Although Japan adopted the Gregorian calendar in 1873, a celebration of the Chinese year is still an important cultural event. This year (2015) the Chinese New Year falls on the 19th of February, and it will be celebrated with particular fervor in Yokohama’s famous Chinatown.

Yokohama Chūkagai has a 150-year history, stretching back to the Meiji era opening of Yokohama’s seaport, when many Chinese immigrants arrived in Japan. Today it is the largest Chinatown in Asia, one of the biggest in the world, with around 250 Chinese owned or themed shops and restaurants. As such the celebration of New Year is understandably large and this year’s event will be no different.

2015, the year of the ram, will be the 29th annual Spring Festival. Like other celebrations around the world it will take place from Chinese New Year’s Eve to the 15th day of the first lunar calendar month.

The celebrations will kick off on the evening of February 18 when people will flock to Chinatown’s two major temples, Kwan Tai Temple and Mazu Miao temple, to light incense and offer prayers for ancestors. There will be a midnight countdown as revelers usher in the New Year, after which they will cause as great a noise as possible in order to chase off evil spirits.

On New Year’s Day the celebrations begin in earnest. The whole area, adorned in red and gold banners sporting popular themes of happiness, wealth, good fortune or longevity, will be alive with people. The sounds and smoke of firecrackers popping will fill the air along with the hammering of traditional drums and cymbals. Between 15:30 and 20:00 you can see the parade of Chinese lions. Here each lion costume, manipulated by two dancers, more brightly colored than the last, will dance and perform acrobatics, parading through the streets. They will bring good luck to the shops and restaurants they enter, chasing away bad spirits, collecting red cash-filled envelopes as their reward.

As well as the usual shops and restaurants there will be various forms of entertainment throughout the New Year festive period. On February 21, 22, 28 and March 1 there will be displays of Chinese performing arts including traditional dances and breathtaking acrobatics. You can also see harp performances and dragon dances. Hour long exhibitions will be held in Yamashita-cho park at 14:30, 16:00 and 17:30 on each of these days. Also through the entire New Year period, from February 19 to March 5 you can see the impressive artwork of the children of Yokohama Yamate Chinese school at Chinatown 80.

Perhaps the highlight of the festival is the Celebration Parade. Many people will be dressed in traditional ethnic clothing, some in the costume of bygone emperors. They will gather to enjoy the gamboling and artistry of the famous Chinese dragons. These puppets, several meters long, supported by a team of dancers are perhaps the most well known aspect of Chinese New Year, and are not to be missed. The two-hour parade begins at 18:00 and takes place all over Chinatown.

To mark the closing of The New Year festivities is the solemn, but visually stunning lantern festival. Set against the backdrop of Ma Zhu Miao shrine, between 17:30 and 19:00 lanterns are lit to guide home wayward spirits. These lanterns will bear wishes and dreams for the coming year, as well as messages to ancestors, sending those epistles floating to the heavens.

Fireworks – Bamboo stems with gunpowder were used in ancient China to scare away evil spirits. These have become the firecrackers we know today. Many cities across the world have controlled or banned the use of fireworks at Chinese New Year due to the fire risk they pose, though Yokohama is not one of them.

Red Envelopes – It was once believed that red would frighten evil spirits, and so it is into red envelopes that married or elderly people place money to give to unmarried juniors as a way of gaining good luck for the coming year. The envelopes will contain an odd numbered currency (even numbered currency is given at funerals) and will be placed under the pillow unopened and slept upon for 7 days.

Clothing – New clothes will be worn, from top to toe, to symbolize a new beginning for a new year. These clothes will commonly be red or brightly colored to frighten evil spirits.

Song – A popular song sung at this time of year is Xīn Nián Hǎo Ya; literally: “New Year’s Good”. Interestingly it has a melody not dissimilar to Oh My Darling, Clementine.