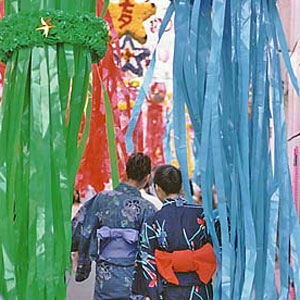 The Tanabata Festival is celebrated annually on either July 7 or August 7, depending on where you are in Japan. The festival celebrates the legend of two lovers, represented by the Altair (Cowherd Star) and Vega (Weaver Star), tragically separated by the Milky Way and allowed to meet only once a year.

More about the legend of Tanabata

This matsuri marks the beginning of summer in many places across Japan, and you can find distinctive tanazaku displays, often described as “Japanese Christmas Trees” and Fukinagashi Streamers decorations throughout Japan for either July or August (depending on the region).

People celebrate tanabata by writing wishes on small pieces of paper called “tanzaku,” and tying them to a decorated bamboo tree. They then pray for their wish to come true. The bamboo and decorations are destroyed after the festival, usually by being set afloat on a river or in an bonfire.

Tanabata is celebrated in many Asian countries and has roots deep in Chinese history. In Japan the celebrations are localized with different regions having developed their own styles and traditions over time, but Sendai’s style is the most famous of the varieties.

Another distinctive Tanabata decoration are ‘fukinagashi.’ These colorful streamers are  hung along streets, or in shopping arcades to represent the strings Orihime, one of the lovers, uses in her weaving.

The festival is held at the OZ Mall and Ozone shopping arcade near Ozone Station on the Meijo subway line. The festival features a selection of arts and crafts and a flea market, obon dancing, taiko performances, and street performers.

The festival is held at the Endoji Shopping Arcade in Nagoya’s Nishi-ku area. This is probably the smallest Tanabatta on the list, but it is in a cool location that not many take the time to see. Endoji is an old Japanese style shopping arcade near the Nagoya International Center. This festival will feature your standard variety of food and game stalls, as well as the decoration of this cool old area. The largest Tanabata festival in the Nagoya area is the annual Ichinomiya Tanabata Festival. There are lots of decorations, stalls, parades, stage shows to enjoy, and tons of people enjoying the summer festival and “bon dancing” wearing their yukata.  The festival is held over 4 days culminating in the main festival; traditionally held on the last Sunday of July at Masumida Shrine, which enshrines a goddess of fabrics, and the Honmachi Shopping Arcade, which can be found very near to Ichinomiya Station on either the JR or Meitetsu lines