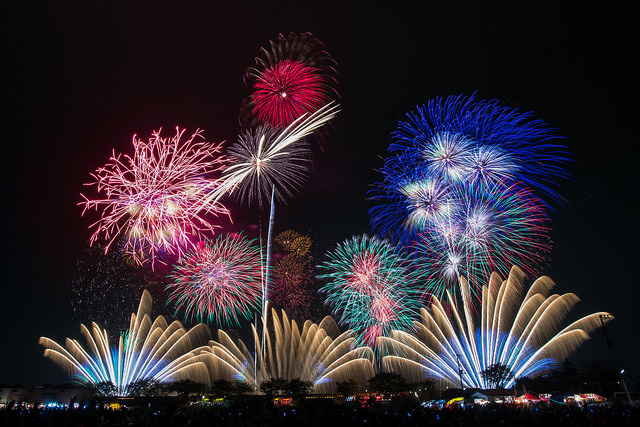 For Brits like myself, fireworks displays conjure up memories of cold winter nights, huddling round bonfires and oohing and ahhing as both your breath and extremities freeze. While this is possible in Japan, here fireworks festivals, or hanabi matsuri, are very much a summertime thing.

Hanabi matsuri is a very important season for Japanese. Fireworks themselves were brought to Japan by the trading Portuguese in the late 16th century, but since that time they have become as instrumental to enjoying the summer as cherry blossoms do the preceding spring. The hanabi season is a time when families can get together and eat drink and be merry. It is a time for gorging on festival food and for the blossoming romance of high school couples sitting under the sky with the lights mirroring the sparks of love in their eyes. It is also a time for the wearing of ‘yukata’, a casual and light summer kimono that is often decorated with bright firework pattern designs and are (at least traditionally) dyed with indigo as a natural mosquito repellant.

Throughout July and August there won’t be a weekend go past without a fireworks festival going on somewhere in Aichi. For a full listing of all the events going on in the area, check the ever excellent Kikuko.com. Below is a selection of our top recommendations.

Perhaps the most popular of the festivals is the Nagoya Port Festival, or Nagoya Minato Matsuri as it is also called. It began in 1946 as a celebration to help raise spirits and encourage positivity following the destruction caused by WW2. The festival runs from 12:30, but the main draw for the huge crowds is the display of around 3,000 fireworks as well as enjoying the cooling ocean breeze on the Umi no hi national holiday (Marine Day).

Another waterside spot oft-frequented by hanabi festival-goers is Utsumi Beach. The beach itself is one of the most popular, and since its recent clean up, one of the best beaches in the Tokai region. The fireworks festival features the rare “Suichuu Star Mine” fireworks that are set off from from the water’s surface as well as a 200m-wide “Niagara Falls” cascade.

” Oiden” is taken from the local Mikawa dialect.  It means “Come on,” as in come on and dance!  This festival brings hundreds of dance teams to the center of Toyota City to dance to the “Oiden song.” The festival itself takes place throughout the weekend and concludes with almost two hours of 12,000 fireworks set to music.

If a touch of the spectacular is what you have in mind for a hanabi festival (and it can be presumed that you have, as very few people go to see fireworks with a high ‘meh’ factor as their top priority) then the Gamagori festival is a must see. As well as 4,000 other explosions, the Shosanjakudama fireworks draw the biggest ‘ooooh’ as, with a radius of 650m, it claims to be largest fireworks on the Pacific coast of Japan.

While this fireworks display is in Gifu and thus outside of our Aichi remit, this pair of festivals is so highly recommended we had to mention it. Taking place over two consecutive Saturdays on the banks of the Nagragawa river, this immense fireworks competition is sponsored by the Chunichi newspaper is perhaps the most spectacular in the area. For the best seats join the massed crowds (up to 400,000 people) on the river’s northern bank to watch around 30,000 fireworks on each day.