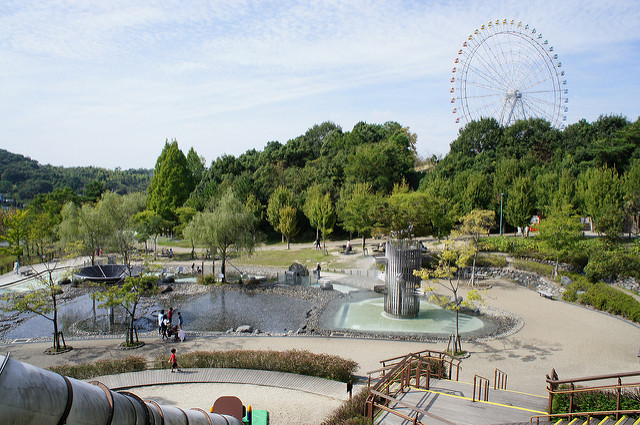 Back in 2005 Nagoya played host to the World’s Fair, and aside from the addition of romaji place names to train and subway station signs (something of a lifesaver for those of us who arrived in the city unable to read hiragana quickly enough to know when to get off the train), Moricoro Park is probably the enduring legacy of that time.

The park itself, officially called Ai-chikyūhaku Memorial Park (roughly meaning Love the Earth Memorial Park, with a play on words on the prefectural name Aichi and the word for love, ‘ai’) is a sprawling 1.85 square kilometers (460 acres) site set in the forested area of Nagakute. When you first arrive at the car park or train station overlooking the site, you can be quite taken aback by the park’s sheer size and, it has to be said, beauty, particularly if you visit during the spring’s cherry blossom season or during autumn when the trees turn their spellbinding shades of red, yellow and gold.

Things to do at Moricoro Park The site is separated into various sites, and there is something to do in all of them. The first thing that you might like to do is to simply wander the grounds, enjoying the beautiful scenery. For a park whose very name encapsulates the idea of loving the Earth, it should come as no surprise that at every turn there is another beautiful flowerbed, a lake teeming with ducks, a thicket to explore or just a wide expanse of grass on which to lie, play or run around.

As well as the scenery, there are also tonnes of activities to enjoy. For a start there is bicycle hire for both adults and children (highly advisable if you want to make your way all around the park as its sheer size can become a little tiring to navigate on foot, particularly for small children), but that is just the beginning. There is a year-round ice skating rink, a swimming pool, a children’s playground and even an immense ferris wheel from which you can take in the view of the beautiful surrounding area.

In addition to all of that, fans of the Ghibli anime movies should not miss the extremely faithful life-size recreation of Satsuki and Mei’s house from the movie My Neighbor Totoro (Tonari No Totoro). Tours of the house can be undertaken, a must for any true fan both young and old, although be warned that at peak times such as weekends the queue can be quite long, so you may want to try to get tickets in advance if you can.

Thanks to the Totoro house, Moricoro Park was the host of the 2015 Ghibli exhibition, however that is not the only event to take place there. Pretty much every week there is something going on, including music festivals, organic food markets, and eco clothing stall events. Most of these such events are related to environmental issues in keeping with the park’s theme, and particularly encourage children to get involved in group activities such as vegetable and rice planting.

To see what is coming up, go to the events page of their website here.

To get to Moricoro Park, take the Higashiyama subway line to its conclusion at Fujigaoka and from there take the Linmo line (on the magnetic levitation train that was purpose built for the 2005 Expo) to Ai-chikyuhaku Kinen Koen Station from where it is a one minute walk to the park.

There is plenty of parking for drivers, costing 500 JPY for the day.