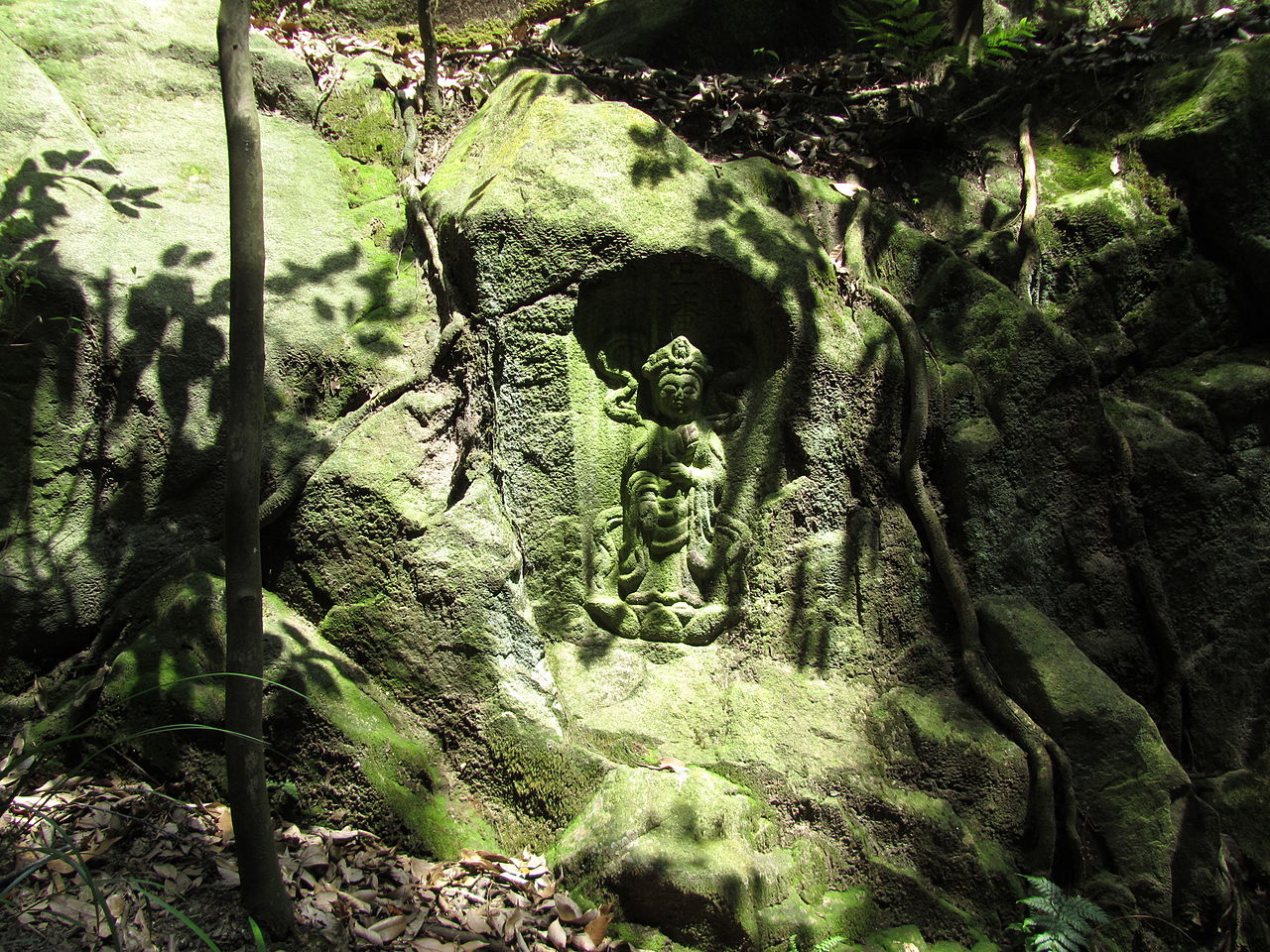 Mitaki Temple (or Mitaki-dera) isn’t as off the beaten path as it once was. All the online references to a “hidden gem” seem to have had their inevitable effect, and the last few times I’ve been there I’ve had plenty of company. Still, except for sunny weekends in cherry blossom or autumn foliage season, Mitaki really is less crowded than Hiroshima’s other main attractions, and well worth a visit.

Mitaki is a temple of the Shingon sect and claims to have been founded in 809 AD by the wandering monk and civil engineer Kukai. The kanji used in the name refers to the three waterfalls you’ll encounter as you wander up the hill from the main gate to the Honden at the top of the central path. Along the way, you’ll pass a number of other moss-covered buildings, several survivors of the atomic bombing, and countless jizo statues, most of them bibbed and capped in red wool.

One of the most noteworthy buildings in the precincts is the Tahōtō two-storied pagoda, constructed in 1526, and carried here from a shrine in Wakayama prefecture in 1951 to help appease the souls of the war-dead. Once a year, in November, the pagoda is opened to the public, who offer devotions to the Amitabha Nyorai sculpture housed within as a “secret Buddha.” On any other day of the year, though, the pagoda is a lovely thing to look at, and the small grounds surrounding it are a pleasant place to stop for a moment.

Following the stone path and steps up the hill, you pass beneath the temple’s belfry and arrive not long after at the Honden, or main hall, at the top. The hall, done in the style of the Kamakura period, houses a Muromachi-era statue of Kannon, which is number 13 on the Chugoku 33 Kannon pilgrimage route. Linger a little, and drink in the atmosphere. Unlike many temples, the combination of running water, silent woods, and mountainside really is quite magical, no matter when you choose to visit.

If you’re up for more of a walk, not far beyond the main gate you’ll find signs for the “A-Course” and “B-Course” trails, both of which lead to the top of Mt. Mitaki, also called Uematsu-yama for a long lost pine planted on the summit by the designer of Hiroshima’s Shukkei-en garden, presumably to give the Asano lords one more thing to look at as they drank their tea. The B-Course is markedly steeper, but shorter, while the A-course offers a longer, more rambling walk. Both pass through splendid stands of bamboo. A friend who occasionally runs the trails has said that several times he’s been shadowed by wild boar, so keep a lookout. At the summit, you’ll find a terrific view of the city laid out below.

Finally, I highly recommend that on your way out you stop in at the charming Kūten-an teahouse near the main gate. From the low seats by the window overlooking the pond, it’s a perfect place to have a drink and a bowl of udon or some Japanese sweets before you make your way back into the noise and bustle of downtown Hiroshima.

Access: From Hiroshima Station, take the Kabe Line two stops to Mitaki JR Station. The temple’s main entrance is a 15 to 20-minute walk uphill, but you may be able to find a taxi if you want to avoid the hike. Signage is adequate, and you’ll take the right fork at Saigan-ji temple, with a park on your right, before you arrive at the gate.

You can also take a taxi from anywhere downtown. It shouldn’t cost more than 1200 JPY from any central area.

Admission: Free, with several spots for voluntary offerings throughout the temple.