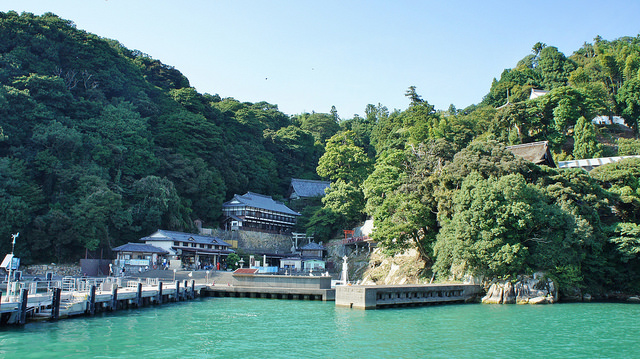 Lake Biwa (琵琶湖 or Biwa-ko) in Shiga Prefecture is the largest freshwater lake in Japan, and thanks to it being located just northeast of the former capital city of Kyoto, it is steeped in mystery, wonder, and is full of wonderful things to see and do. Named for its resemblance the lute-like musical instrument ‘biwa‘, it has long been a popular holiday and day trip destination for Japanese. Below are just a few things to see when isiting this beautiful region

Hikone Castle is one of only 12 Japanese castles still with its original keep, and one of only four designated as a National Treasure (the highest designation for cultural properties in Japan); as such it is one of the main draws to the Lake Biwa area. Built in 1603, following the Battle of Sekigahara, it was saved from the great dismantling of Japanese castles during the Meiji era by the Emperor Meiji himself, who visiting the rejion fell in love with its beauty.

Today most of the building has remained intact exhibiting many interesting architectural structures including a structures that can be easily destroyed for protection in case of an attack upon the keep. There are also several turrets which can be seen from inside as well as a large bell that is still rung several times every day to tell the time.

Another castle town with a long history, Nagahama was once home to the famed military General Toyotomo Hideyoshi, and one of the city’s attractions is a recreation of the castle from which he built his illustrious career.

Between the 17th and 19th centuries the city grew as a post town, and in 1900 a bank, which incorporated both Western and Japanese architectural features, was built. Its plastered walls were painted black and it soon became known as the “Black Wall Bank”. It still stands today, and the area in which it is preserved remains as Black Wall (Kurokabe) Square, a delightful sightseeing area.

Within this area you can find, not only buildings that illustrate the historical importance of the area, but also many great handicrafts stores – particularly glass blowing – at which you can make your own for a fee. There are also some lovely temples – Daitsuji in particular – and if you like beer, the local brew, Nagahama Roman Brewery, is pretty decent.

Perhaps you didn’t come all that way to Lake Biwa to spend all your time on shore like a landlubber. If that is the case, a particularly beautiful way to spend your time in the area is on one of the many boat cruises around the lake. Probably the most popular is the ‘Michigan’, a paddle steamer on which you can spend a whole day soaking in the sights – if not the water – of Lake Biwa. (The website can be found here, though bear in mind this is not an endorsement by JIS, it’s just for information purposes.)

From the ship windows and decks you can enjoy the beautiful lakeside vistas and the mountains to the west, stopping off at Okishima, the largest of all the islands on Lake Biwa; Chikubushima, with its rich religious history and beautiful views; and the beautiful Takeshima, an island that appears to change shape depending on the angle from which it is viewed. In addition, there is a commentary provided while on board as well as a yoshibue flute concert.

If there is one problem with the boat day trips, it’s that you may not have all the time you like to enjoy the Chikubushima island. At just 2km of coastline it may not seem worthwhile heading out into the centre of the lake just to see it, but it is in fact one of the must see spots in the area.

A half hour ferry trip from Nagahama, as a nationally designated Place of Scenic Beauty and Historic Site the island is an absolute treasure trove for those who love nature as well as gorgeous shrines and temples. In the southern part of the island you can find Tsukubusuma Shrine, said to have been established in 420. Once there you can purchase two small clay discs on which you should write your name and wish, and then attempt to hurl them through a torii gate below (as you do so, try to ignore the hundreds of other such, poorly cast discs that litter the area as evidence of the task’s difficulty).

Another important place of worship is Hōgon-ji, Shingon temple said to date from 724 with a striking three tiered pagoda that ranks with the Enoshima Shrine and the Itsukushima Shrine as one of Japan’s Three Great Benzaiten Shrines.

If the above excursions seem like, well, not enough of an excursion for you, a great experience – if you are relatively fit and have a little bit more time – is to cycle around the lake. With a circumference of around 230km, Biwa-ko is quite a ride, but it is also a staggeringly beautiful one – perhaps one of the great rides of Japan.

Whether you ride counter-clockwise (keeping the lake on your left at all times) or clockwise (making the most of the prevailing winds) there is plenty to see along your route. Whether it is taking in the stunning view from the top of the Rainbow Bridge, wandering around Ishiyama Temple where Murasaki Shikibu is thought to have begun writing The Tale of Genji, or enjoying the beaches of Makino, there are plenty of stops along the way. In fact, if you have a few days, you can even stop at any of the cities mentioned above.