Koyo, or Fall Colors in Kobe 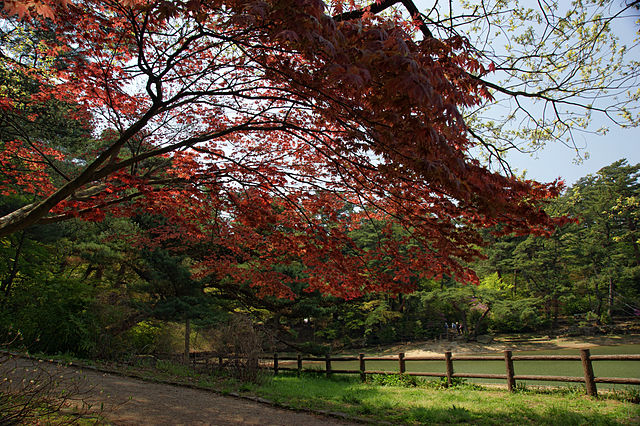 Koyo, or Fall Colors in Kobe

Visitors flock to Japan in the spring to see the cherry blossoms, but there’s an event that’s just as impressive in the fall: the changing colors of the leaves. Called koyo in Japanese, it’s an opportunity to head outdoors and live in the moment.

Fall colors are a great reminder of the impermanence of the seasons. In fact, appreciation of the beauty of the changing seasons has been characteristic of Japanese culture since ancient times. There’s even a mention in the novel “The Tale of the Genji” — one of the world’s first novels, written during the Heian Period (794 to 1185).

Starting in mid-September, the “koyo front” slowly moves its bands of color. It starts in Hokkaido, moves to central Japan, and ends in the South. In Kobe, the leaves start to change at the beginning of November. Families head outdoors to enjoy spectacular views of changing leaves accompanied by the comfortably mild weather.

Whereas some people celebrate fall leaves much like they do the cherry blossoms of the spring — by spreading out a picnic blanket under the trees — it’s more common to celebrate koyo by taking a short hike or walking through the mountains. In addition, there are some particularly beautiful spots within the city. Sometimes, city trees are further beautified by fairy lights, which create an even more striking appearance.

If you are lucky enough to be in Kobe for this quintessential Japanese tradition, head to one of these top spots. Nunokibi Falls is a midstream plunge of the Ikuta River and one of the country’s most revered waterfalls, renowned for its pure water. A walking path winds from the Mount Rokko’s base (near the Kobe Nunobiki Herb Gardens), up and across the falls. The hike takes about 40 minutes.

Another way to ascend the mountain is by ropeway. Whatever you choose, the panoramic views of Kobe city and the Seto Inland Sea will be memorable. Plus, you’ll see spectacular foliage along the entire journey. The Sorakuen Gardens were originally part of a private residence, but ownership passed to Kobe city in 1941, and the gardens have been open to the public since. The trees in the park are arranged in a way to maximize the impact of the fall colors. The combination of camphor laurel, maple, and dogwood brings a variety of tones. Simultaneously, as the fall leaves, the gardens host the Kobe Chrysanthemum Exhibition, which adds another reason to visit. Only 20 minutes by car from Kobe Sannomiya Station, another world awaits you. Outside of the hustle and bustle of the city, fall colors explode around this 1,000-year-old temple. The Kobe City Forest Botanical Garden, previously called the arboretum, is a massive botanical garden and arboretum near Mount Maya. Despite its proximity to the city, the garden is an oasis of nature. Immerse yourself in the sights and sounds of the forest, surrounded by the fiery colors of the maple leaves. There are several hiking trails, all of which take around an hour to walk. Shiawase-no-mura is a welfare complex for disabled and elderly people, but it’s open to the public for various outdoor activities. Combine viewing the fall colors with a picnic, a barbecue, or even an overnight stay at the campsite. There’s also a horse-riding park and hot springs. The central feature, though, is a Japanese garden with a pond and teahouse. Stroll through the grounds to see the cherry trees’ autumnal shades, zelkova, tulip, sweetgum trees, maple trees, and oak trees. Futatabi Park is a small protected area of wild space around Shiogahara Pond. Visitors flock to the park in fall to see the vibrant tones of the maple, jolcham oak, and wax trees. Located just outside of the city, Zenshoji Temple is famous for the old maple trees scattered across the nearby mountain. In fact, the temple is often called Momiji Temple, which means “autumn leaves temple.” The temple draws flocks of people every autumn. Sumadera was founded in the year 886 as a temple of Shingon-shu, a Buddhist sect founded by Kobo Daishi. The grounds are famous for both cherry blossoms and fall colors. The temple is also worth visiting for the pieces of mechanical art installed across the grounds, each of which has a unique significance. Suma Rikyu Park is a 20-minute drive from the center of Kobe. This western-style garden has more than 700 trees, including maple, cherry, sweetgum, redwood, and wax trees, alongside water features like fountains. The fall colors range from bright yellow to vivid red. You’ll have spectacular views of Osaka Bay from the park. Okusama Park is just to the east of Taikyodan Shinki Shrine. Stroll about the park to enjoy the autumn leaves in the natural forests, rice terraces, and grasslands. As you wander around, you may come across some of the seven ponds, which reflect the fall colors in their still waters. Taisanji Temple was established in 716 by the Empress Gensho. The more than 160 species of plants on the grounds create a forest habitat for countless small animals and birds. As some of the trees are evergreen, the fall colors are mixed with deep green tones.

Zensyouji-kobe By Bittercup (Own work) [CC BY-SA 3.0], via Wikimedia Commons