Koyo, or Fall Colors in Hiroshima 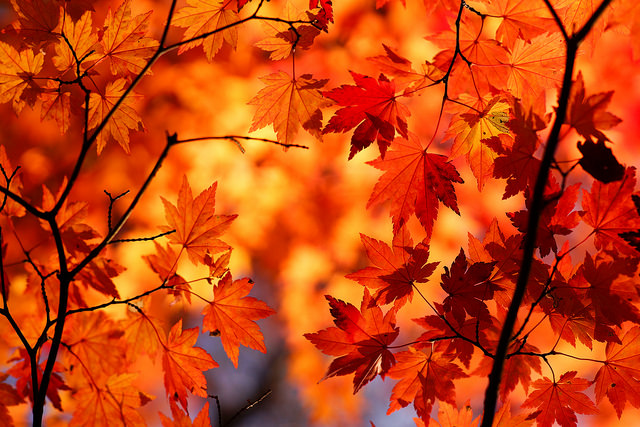 Koyo, or Fall Colors in Hiroshima

The Japanese are proud of the four distinct seasons that Japan offers and is very conscious of changing the seasons around them. They often celebrate little, or not so little, milestones between each to mark the occasion. Long sleeve or short sleeve shirts, for example, are there one day but gone the next as the season officially ends for them. Similarly, spring and fall enjoy their own milestones, “hanami” and “koyo,” and taking a moment to enjoy “the moment” of each is a national obsession.

Viewing the changing colors of fall leaves, which is called either koyo or momoji in Japanese depending on the type of tree viewed, is the autumnal answer to the more famous cherry blossom viewing of spring; a traditional chance to get outdoors to live in the moment of the season, and to reflect on the impermanence of it all. Since ancient times in Japan, this urge to experience the beauty of the changing seasons has been custom; you can find it referenced in the classical Heian Period (794 to 1185) novel “The Tale of the Genji;” one of the world’s first novels.

Starting in mid-September, the “koyo front” slowly moves its bands of color south from Hokkaido to central and southern Japan at the end of November. Many families will head to local parks or the mountains and countryside to enjoy the cooling temperatures and spectacular views of changing foliage. While some people celebrate the leaves much like they do the flower petals of spring, by spreading out a blanket beneath them for feasting and much drinking, it is more common for koyo to be celebrated by taking a short hike through the mountains or a walk in certain areas of the city, where the trees can be found.

Hiroshima usually enjoys its turn from late October until the middle of November. If you are looking for an excuse to get outside, this a good one. Why not try one of these spots in the Hiroshima area?

Miyajima Island, just outside of Hiroshima, is famed for the ‘floating’ shrine of Itsukushima and being the best spot in the Hiroshima area to see the changing colors of autumn. Having once been part of what was called ‘Aki’ (autumn) Province, this is perhaps no surprise.

The highest concentration of colorful trees is found in the Momijidani (Maple Valley) behind the town, for which the famous Momiji Manju (steamed maple leaf buns) were made.

Running 12km from the Hiriji lake entrance, Sandankyo Gorge is a dramatic place to witness the autumn foliage. With steep rocky cliffs, powerful waterfalls, and clear, mirrored pools, this gorge in the northern part of Hiroshima prefecture comes alive with bursts of color as the leaves reflect in the coruscating waters.

A 70-minute bus ride from Hiroshima station, and best experienced as a day trip, but travelers will be rewarded by the best of only five of Japan’s ravines to be designated as a National Scenic Beauty.

A Buddhist temple with expansive grounds surrounded by a prefectural park, Buttsuji temple in Mihara City luxuriates amongst thousands of trees, all changing their autumn shades. Unlike the dramatics of Sandankyo Gorge, the 80-year-old Buttsuji Temple is a calm, quiet spot of zen tranquility in which you can peacefully enjoy the combination of Japanese nature and tradition together as one.

If you don’t want to leave the Hiroshima city limits, Mitaki-dera Temple is probably the best place to see the fall colors. With the golden leaves littering paths and the many Buddhist images and jizo statues that adorn the temple’s gardens, it is a spot of beauty perhaps unrivaled in Hiroshima-shi.

It is advisable to head up the mountain trail from the top of which you can see the blazing reds in all their glory for the best views. A word of warning, thanks to its renowned beauty and ease of access, Mitaki-dera is not somewhere at which you can enjoy the colors alone. Be prepared for crowds.

For those requiring even easier access, Shukkeien Garden, at just 15 minutes walk from Hiroshima Station, cannot really be beaten. Its name, which can be translated as ‘shrunken scenery garden,’ is particularly apt, as, through careful cultivation, the garden imitates mountains, forests and valleys and other natural scenic phenomena.

While the autumn leaves are not quite comparable to the impressive Mitaki-dera Temple, this garden, with its winding paths and delicate environs created for the tea ceremony’s enjoyment nearly 400 years ago, is still a lovely place to see the colors without venturing too far.

Part of the Hiba-Dogo-Taishaku Quasi-National Park, the Taishakukyo Valley can be found in the northeast of Hiroshima Prefecture, and its river meanders by a plethora of waterfalls, limestone caves, and cliffs, making it a dramatic spot for viewing the fall foliage.

To see it at its best, ride the pleasure boat that follows the 18km long ravine and departs every 30 minutes from 9:00 until 16:30. If you feel a little more energetic and adventurous, you can get a more personalized journey by kayaking along the river. Out of the water, numerous footpaths that wind through the trees provide stunning views of the surrounding area.

Founded in 1936 and modeled on some of Japan’s most famous temple buildings, Kosanji on Onomichi’s Ikuchijima Island is a striking structure all year round. During the autumn, however, it really comes into its own.

The bright red and yellow leaves provide an incredible backdrop for the numerous national treasures discovered about the grounds, including a 10-meter tall Buddha and a 15-meter pagoda. To get the best view, climb up to Miraishin no Oka [Heights of Eternal Hope for the Future], a wide walking area made entirely from Italy’s marble.