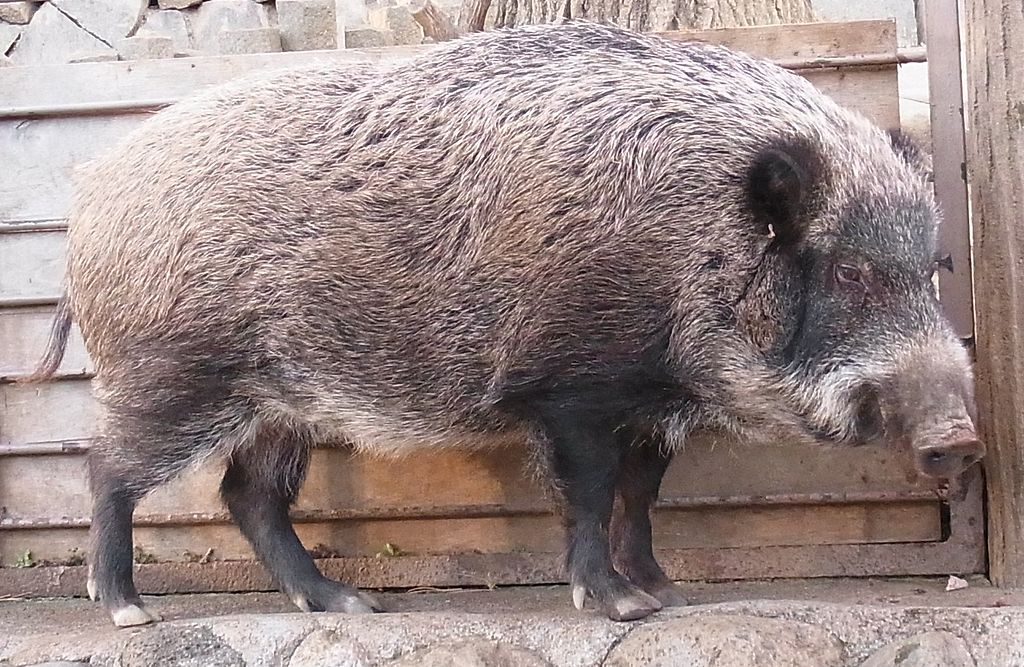 Sometimes the most dangerous animals are not the ones you expect. In the United States the animal that kills the most people each year are deer, from collisions with automobiles. Yes, adorable Bambi itself.

Kobe has a similar problem with wild boars. These feral pigs are native everywhere in Japan where they are called yama kujira – the mountain whale. The creatures are scarcely that large, although they can grow to be over 100 pounds and more. The Japanese boar has little fur and is striped, especially when young. It boasts distinctive white whiskers.

For hundreds of years humans had little contact with boars, who stayed mostly hidden in their mountain forest habitat. The animals were actually venerated in Japanese culture, admired for their bravery and determination. In some places boars became symbols of prosperity and fertility.

Boars are coming down from the hills

But in recent years the boars have become increasingly common in farmers’ fields, perhaps due to a reduction of their traditional habitat. They destroy crops and threaten to ruin the farms financially. The beleaguered land owners try increasingly imaginative ways to deal with the invaders from spicy hot peppers spread on the ground to actual trapping and hunting. Japan has no national policy for controlling wild boars – it is up to the ingenuity of the farmer.

There is another danger from boars in Japan – radioactivity. Animals contaminated by the nuclear reactor failure at Fukushima have begun spreading into other prefectures. No one knows how many wild boars are radioactive but given their insatiable appetites and proclivity for procreation there are likely many thousands. In places boar meat must be tested before human consumption and disposal of radioactive carcasses has become problematic.

Kobe has its own wild boar problem. The voracious pigs are showing up within city limits. The animals can be aggressive and there have been reports of boars biting and injuring people in the city. One was even spotted strolling into a Higashiyama Ward hotel. The boars are believed to be wandering into the city in search of an easy meal. It is a whole lot easier for a wild pig to snatch food off a trash heap than root around for nuts in the woods. Wild boars seem to have no fear of people.

The problems that arise from these pig-man encounters is that many people think the wild boars are cute – especially baby piglets – and therefore harmless. The boars are known to roam the campus of Kobe University on the slopes of Rokko Mountain. They are so often seen that the library has made the wild boar its official mascot and a road has been named after the college interlopers.

Wild boars have developed a fondness for breeding in the concrete culverts around Kobe and the little striped piglets will snatch the heart of any observer who happens upon a new brood. Feeding wild boars, even babies, is against the law in Kobe so it is best to keep your distance. Then again, it is always advisable to give a snorting wild boar a wide berth when encountering one. Remember, Bambi is the deadliest forest animal of them all.