Know your Shinto: rituals and behaviour at a Shinto shrine 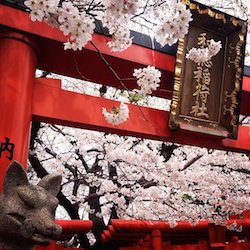 Know your Shinto: rituals and behaviour at a Shinto shrine

When sightseeing in Japan, some of the most popular and fascinating places to visit will be the many shrines devoted to Shintoism, Japan’s predominant religion. Shinto or, “way of the divine”, is a polytheistic religion, thereforeeach shrine may have its roots or allegiances to a different god (kami). Like much of Japanese tradition, the importance of ceremony is at the heart of these shrines, and so, if you visit a shrine for yourself, while it is not imperative, you may wish to observe these rules.

On the path to the shrine you will likely pass through a torii gate. This tall structure (often brightly colored in red, but not exclusively) is the entrance to the shrine. Before passing through, you should bow to show your respect for the gods residing within. When leaving, you should also turn to face the shrine and bow once more before you exit. When passing through the torii gate, you should avoid the centre line, instead stepping to the left or the right. The centre path, or sei-chu, is the causeway of the Gods. Should you wish to take photographs of the torii, you should again avoid taking from this central path.

Within the shrine you will likely find the chouzubachi, a water basin at which to wash yourself. It is important to approach the enshrined kami clean, and it is equally important to follow the correct procedure for doing so. Above the water basin you will find long handled scoops. First you should take this scoop in your right hand and pour water onto your left, before pouring from the left onto your right. Then replacing the scoop in your right hand, pour water into your cupped left palm and use this to rinse your mouth. You should never rinse directly from the scoop, as others have to use it as well. Finally, before replacing the scoop, tip it upwards so that the remaining water pours down the handle, thus cleaning it. Throughout this procedure, take care not to contaminate the chouzubachi by spilling in used water. Depending on the size of the shrine it may be permissible for more than one person to pray at the same time, however, if it is small, you should wait your turn at the foot of the stairs. After your approach you should throw your coin into the offertory box. How much is not as important as the heartfelt sentiment, though usually it will be JPY100. Due to perceived bad luck, some people avoid donating figures including a 4 or 9, as the former can be pronounced ‘shi’, also meaning death and the latter is pronounced ‘ku’ and can also mean suffering. Once you have made your offering you should ring the bell to summon the kami. Then you should take a step back, twice bow deeply, and make your prayer. To conclude you should clap twice and bow once again. Photos should not be taken of the main shrine, particularly not when a ceremony is being performed. After you have prayed to the shrine’s God, you can purchase a charm (omamori) or wooden prayer plaque (ema). On the latter you can write your wish or prayer and display it with the many others. While these can be used for various prayers, most commonly they will reflect the powers of the shrine’s kami. For example, during school exam periods, shrines with links to education will have many ema, while in April, at the beginning of the financial year, the most popular shrines may be those connected to prosperity. As for the omamori, it may be tempting to see these as part of Japanese souvenir tradition, but they are not to be seen simply as omiyage. Each charm has a specific meaning attached to it, so you should be careful as to whom you give them. You wouldn’t want to give to your grandfather an omamori intended for pregnant women, would you? The powers of the omamori last for one year and afterwards, if possible, should be returned to the shrine from which it came. Do not open the charm, as doing so not only negates its benefits, but shows disrespect to the Gods.

Shinto shrines are open to all, and are not exclusivist. Failure to follow these rituals will not see you cast out or shunned. The above are just guidelines that may help you understand or enjoy your experience of the many beautiful and interesting shrines around Japan, whilst showing due respect to the traditions held within.