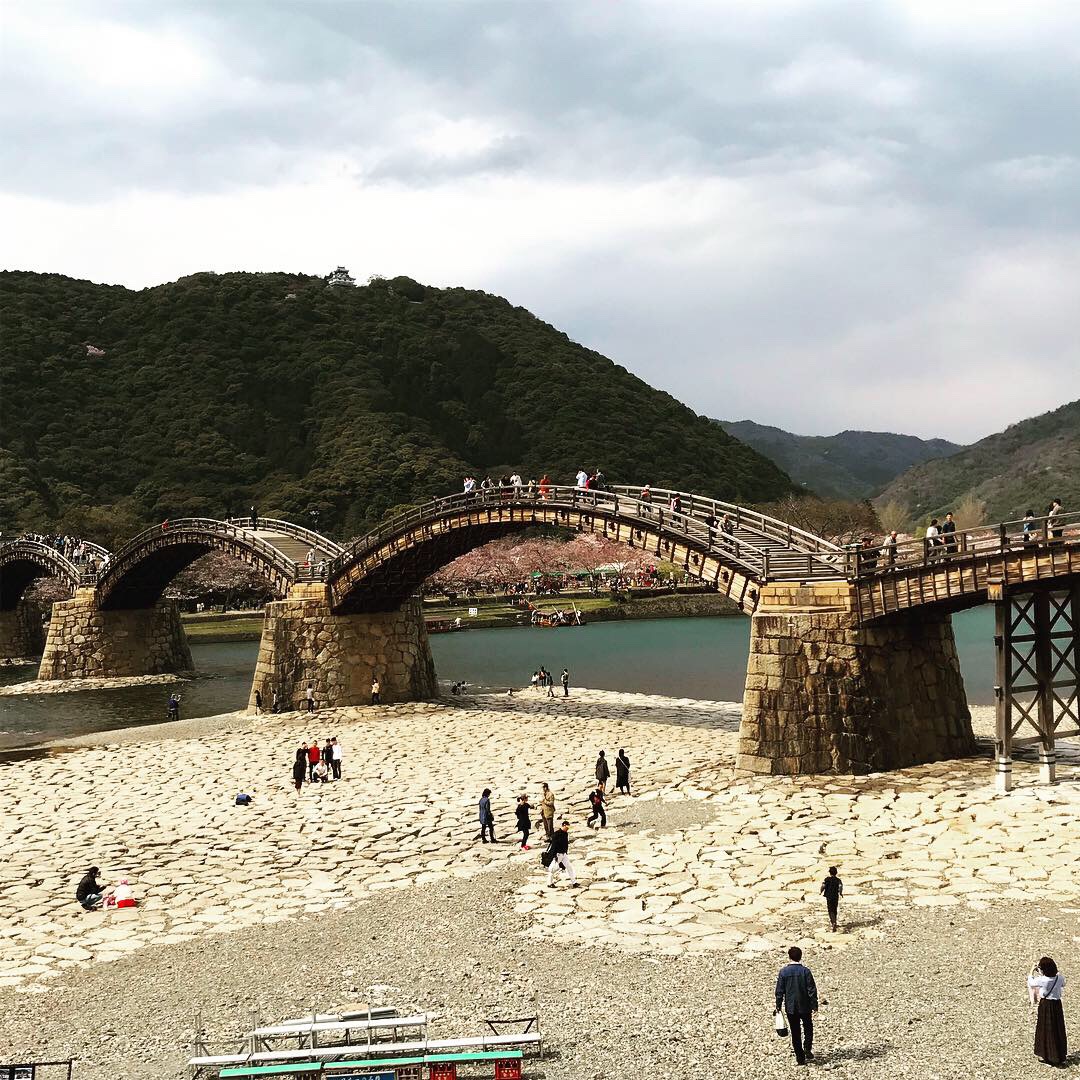 If you are looking for a famous sightseeing opportunity near Hiroshima with beautiful scenery, then look no further than Iwakuni in Yamaguchi Prefecture, an easy day trip away. It has something to suit everyone, historic wooden engineering, to a castle museum, to lucky white snakes and ice cream of every flavor imaginable.

Kintaikyo is the most famous attraction, a picturesque bridge that spans the Nishiki River constructed in 1673 by the Kikkawa clan’s feudal lord for the sole use of the aristocracy. Initially, the bridge stood only on wooden supports, which washed away soon after but rebuilt immediately. The new supports survived unscathed for 276 years until a typhoon destroyed them once again in 1950. after U.S. occupation forces quarried the sand from around the area, destabilizing the foundations. Interestingly, until reconstruction in 1953, the bridge was constructed using only centuries-old Japanese wood joinery techniques, but problems finding a master builder with that ancient construction knowledge ended that tradition. The present bridge was restored between 2000-2003 with metal plates, and iron spikes, and nail reinforcements.  At 193m long, 5m across, and a height of 6.6m high, it is impressive.

The riverside is a beautiful spot for a picnic or bento lunch, and the kids can entertain themselves paddling in the water under the bridge. Very nice on a hot summer’s day. The bridge is beautiful in all seasons, but particularly in spring when the cherry blossoms are in bloom along the river. And the nearby temples and cemeteries are a quiet meditative stroll. Annually in April, there is the annual Kintaikyo Matsuri or Kintaikyo Festival, which celebrates the return of the feudal lord from the capital of Edo. If you like traditional music and costumes, it’s worth a visit.

If you are interested, Iwakuni Castle is conveniently located just on the top of the hill behind the bridge. The original castle was demolished shortly after establishment to conform with the Shogun’s edict of “one region, one castle “(one region, one center of power). The present castle ferroconcrete construction dates from 1962 and has already outlasted the original castle by a considerable amount. Inside you will find static displays of samurai swords, armor, and other items related to the castle’s history.

A set ticket includes not only the bridge and the castle but also the ropeway for accessing the castle. The castle itself is a tad ordinary, but the view from 200 meters above the bridge is spectacular. Before heading up to the castle, you might consider stopping by to see the white snakes, which are unique to the region and believed to be very lucky.

After all that you might need a sugar fix, how about some ice cream? With over 100 flavors, you’re sure to find something you want.

Iwakuni can be accessed via the JR Sanyo Line. From Hiroshima Station, it takes approximately 50 minutes. You will then need to take a bus to the bridge, located about 15-20 minutes away. The bus is located right outside the station, and there are plenty of signs in English to help you find your way. 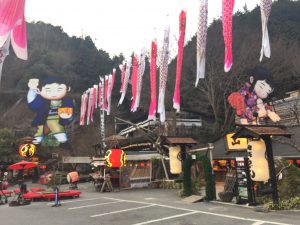 Alternatively, if you go by car, I recommend a drive back via Sanzoku Irori Sanzoku (Bandits Lair Fireplace, a feudal age style sprawling restaurant complex in the hills to the south-west.  I often include this on my private tour, and the guests love it. Excellent grilled chicken, noodles, and other Japanese fares, or just coffee or ice cream.  A good boost for the drive home. Also, having mentioned a picnic by the bridge earlier, you might consider dropping by Sanzoku en route to Kintaikyo and picking up a delicious bento for your picnic.

All photos by the author, Hugh Cann