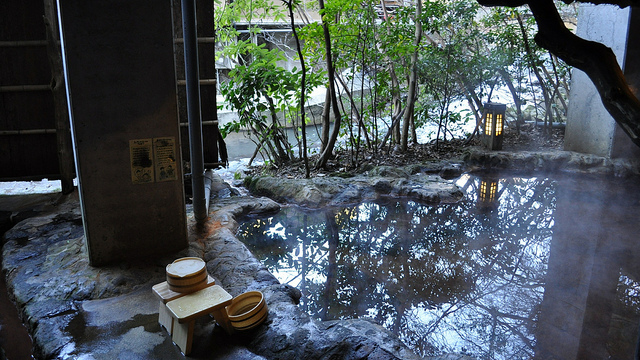 As temperatures around the country fall, now is the perfect time to indulge in the Japanese pastime of onsen. Best described as a hot spring bathing spa, onsen is a long held tradition in Japan and the near endless supply of geothermal springs is the one positive aspect of living in a nation of constantly shifting tectonic plates. Below are some of the most highly regarded onsen areas in the country.

The island of Kyushu is known for being perhaps the best area for onsen, and Kurokawa Onsen is probably the pick of the bunch. Located around 20 kilometres (12 miles) from Mount Aso, it is a beautiful town that has retained its traditional charm and resisted the big money lure of the concrete and neon spa hotels you find elsewhere. Kurokawa Onsen is particularly well known for its ‘rotenburo’ (outside baths) next to rushing rivers, such as the Yamamizuki bath, considered one of the best riverside baths in Japan .

Another Kyushu based onsen area, Beppu, in Oita prefecture, is one of the country’s best known, and produces eight different springs. One of the most remarkable things about the onsen in Beppu, aside from the fact that you can see the steam rising up all over the city, is the variety of bath types. Rather than just having hot water onsen, Beppu also boasts steam baths, hot mud baths and sand baths where bathers are buried in naturally heated sand. If you want to try out the latter, head to Takegawara Spa. It was constructed in 1879 and is perhaps Beppu’s most famous bathhouse. Though be warned, the building is partially surrounded by a red light district. Located in the mountains of Gunma at 1200 metres (4,000 ft) above sea level, Kusatsu Onsen is probably Japan’s most popular spa, and has been listed in Japan’s Top 100 Onsen at number one for the last 12 years in a row. The high quality water, as much as 32,300 liters of it being discharged every year making it the greatest quantity in Japan, is said to cure all diseases bar love sickness. The unique bathing method of jikanyu (where bathers sit in 48 degree water for exactly three minutes) and yumomi (stirring the water with long planks for cooling the temperature of the water, also serving as an important pre-bathing exercise) are customs that have been passed down since the Edo period.

If you want an onsen with a view, you can do no worse than gazing out over Mount Fuji as you soak in your spa. It is perhaps more down to its stunning view and its close proximity to Tokyo that makes the spa town of Hakone so popular, but what a view it is! Of course not all spas in the area have the advantage of being in eyeshot of the nation’s most enduring symbol, but if you can find one – particularly during the time of the magical Diamond Fuji – there is possibly a no greater Japanese experience.

Noboribetsu is considered to be the best onsen in the northern island of Hokkaido. Part of the Shikotsu-Toya National Park, there are nine different kinds of water including various minerals such as iron, salt and sulphur. The latter is considered to be particularly good for the skin, but doesn’t leave you smelling so fresh (as a suggestion: don’t plan a long train journey directly after a sulphur bath. Your fellow passengers will not appreciate it).

This one comes with a personal recommendation. Set up in Gifu Prefecture’s Northern Japanese Alps, the spa valley of Okuhida is a beautiful little spot famed for its outdoor rotenburo baths. There are a variety of bathing types, both segregated and mixed (some prefectures do not allow mixed bathing, though Gifu is not one of them), with five water sources feeding the towns along the valley. The largest, and oldest, is Hirayu Onsen, and is said to have been discovered in the 1560s by Takeda Shingen’s troops as they crossed through the Okuhida region. If you are looking for an onsen with artistic pedigree, Dogo Onsen is the one for you. Mentioned in Japan’s oldest history book, the Nihon Shoki, it also pops up in Shikibu’s he Tale of Genji, Soseki’s Botchan and is the model for the bathhouse in the Ghibli anime Spirited Away. The main onsen is the Dogo Onsen Honkan, a wooden structure, dating from 1894. The interior of the Honkan is a maze of traditional stairways and rooms and the old-fashioned baths are furnished with granite stone and marble walls. Beautiful and historical combined.

Just one and a half hours from Nagoya, Gero is a lovely town that is worth the trip for onsen lovers and ranidaphiles alike. Due to the city’s name sounding like the Japanese sound for ‘ribbit’ (in Japan frogs say ‘gero gero’), there are homages to frogs everywhere, but that is not why most people come. In a dramatic setting amongst the mountains of Gifu and with waters that are said to be particularly good for relieving neuralgia, skin complaints and rheumatism, Gero is an onsen town so old that it was famed in the 10th century and mentioned as being one of Japan’s top three in a document from the Muromachi period. Depending on the time of year you can bathe riverside, and all around the city there are small foot baths (ashi-no-yu) for free use.

Tokyo has plenty of places you can get to if you are unable to escape the city! Below are a list of the ‘super onsen’ in the Tokyo area. So if you can’t get away to one of the places above, any one of these are a perfectly adequate place to enjoy the onsen experience. Manyo Club Onsen in Yokohama’s Minato-Mirai district called 万葉倶楽部 Manyo Club in English is located a short 5 minute walk away from the Minato-Mirai line’s Minato-Mirai  Station.  The “super sento” carries all the amenities of a fine countryside hot springs hotel but with dramatic views of the Yokohama seaside.

Canal Resort is in Nakagawa-ku, and is a super sento.  It probably would not be considered among the “best” of Japan, but its available and very nice!

Arima Onsen is a hot spring town within in Kobe with a 1,000 years of history behind.  Located away from the city center, on the other side of Mount Rokko, it enjoys a natural setting with a mountainous feel to it,, despite its proximity to Kobe and Osaka.

Yunoyama Hot Spring is s a traditional hot spring with over 1,000 years of history, it has even been designated an intangible Folk Cultural Asset of Japan.

Like many aspects of Japanese culture there is etiquette to consider when visiting an onsen, and if you wish to impress your hosts it is best if you follow the rules. Before you head to the onsen, check out some of the how to’s, do’s and don’ts of the onsen experience.