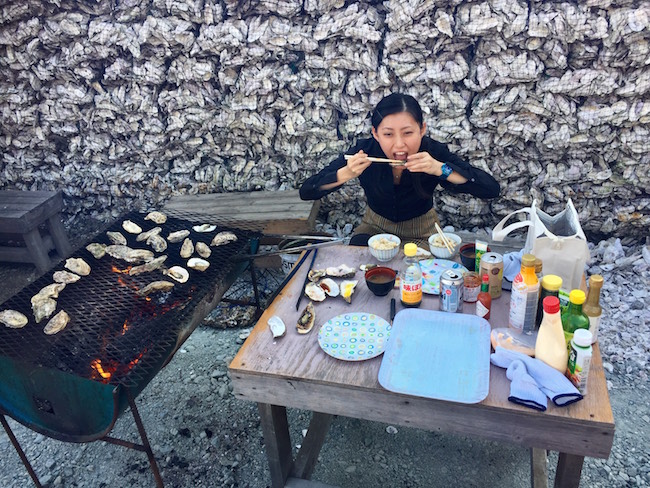 In much of the world, oysters are considered something of a delicacy. They are an aphrodisiac, they are rare, and thanks to their high price they are often considered the preserve of the wealthy, up there with champagne, caviar, and yacht clubs.

However, in Mie Prefecture this is not the case at all. The Ise Bay around the cities of Ise and Toba, and Matoya Bay in Shima are renowned for oyster production, and from November to March there are plenty of places at which you can have your fill of these delicious oysters, eating them by the literal bucketload, for ridiculously cheap. Well worth checking out! Perhaps the best-known oyster spot is Uramura in Toba, as it has been for the past 70 years. All along the Uramura coastline there are plenty of oyster houses that offer the delicacy in a number of ways, whether it be sampling a single oyster or getting stuck in to the tabehoudai, all-you-can-eat courses (yes, that’s right, all you can eat oysters. It’s pretty unimaginable, isn’t it!).

While there are plenty of ryokan serving oysters, many of these places are outdoors, meaning that it’s a good idea to wrap up warm. However, you will be thankful for the al-fresco dining, as the standard way to eat oysters is grilling rather than raw, so you want all that charcoal smoke up and out of your eyes.

As well as grilled, some places offer steamed oysters, raw oysters, fried oysters, oysters on rice, or oysters in miso soup. It really is an oyster extravaganza There are a number of restaurants in the area. Below are just a few suggestions. Bear in mind that they all require reservations in advance.

Another area well known for its oyster production is Matoya Bay. South of Toba, near Shima City, Matoya Bay has been a location for oyster cultivation since 1925 and is home to the famous Matoya Oyster. Though much smaller than Ise bay, with three rivers originating in the mountains of the Shima Peninsula running into it, an abundance of plankton, sea water packed with nutrients, and gentle waves, it is the ideal place for oyster farming and produces two to three times the number of oysters as other prefectures.

Matoya oysters are known for their distinctive taste, sweet and plump, and are predominantly found in restaurants in Tokyo and Kansai area. But you have a chance to try them here. There are a number of restaurants in the area. Below are just a few suggestions. Bear in mind that they all require reservations in advance. While you are in the area, why not check out what Mie has to offer. Racing fans will enjoy a trip to the Suzuka Race Course,  adventurous travelers can scale Mt. Gozaisho, the towns of Ise, Shima and Toba have lots to recommend them, and then there is Ise Grand Shrine, Japan’s most important shrine.

Photos: By Jay Drew (Own work)

Photos: By Madoka Suzuki (Own work)