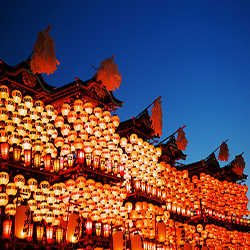 Not content with being the site of Japan’s oldest (and arguably most elegant) castle, or being a staggeringly beautiful city, every spring sees Inuyama host a particularly spellbinding festival.

The Inuyama festival is held annually on the first weekend of April and was begun under the orders of Owari clan retainer Hayatonosho Masatora Naruse in 1635 as a festival for Haritsuna Shrine where the kami (god) of the city is enshrined. The festival begins in the early morning as thirteen festival floats are dragged from various points of the city until they commune in the yard of theshrine. While festival floats are not uncommon in Japan (called variously dashi, yatoi, hoko, danjiri, and here, yama), it is the sight of these multi-story wooden structures set on the backdrop of Inuyama’s ancient streets as the cherry blossom flutters through the air that makes it an event so celebrated that it was designated as a National Important Intangible Folk cultural asset. Three stories tall, these outrageously beautiful floats are ornately carved and decorated, each in a different style.

The yama are fixed axle vehicles, meaning that given their immense weight, while pulling them along the city streets is difficult, it is how they handle corners that makes for particularlyinteresting viewing. The men whose job it is to represent their area in the parade must put all of their energies into lifting and twisting these gargantuan caravans. Most of the crowds will cheer the men on, though sensitive engineers may weep.

Not content with being gorgeous and cumbersome, they are also amazingly entertaining, for sitting atop each float is a karakuri puppet. Karakuri is a traditional Japanese mechanized puppet or automaton, essentially Edo-era robots.

Developed in the 17th century the karakuri are powered by a whalebone spring and controlled by a series of wheels, cams and levers, and were often used at festivals to perform reenactments of popular myths. Many of the Karakuri at Inuyama festival are unique to the area, and at various stages in the day will delight festival goers in turn with performances of Japanese legend dedicated to Haritsuna Shrine’s kami.

Love is in the Air The shrine at the foot of the hill on which the castle sits atop, is Sanko Inari, a temple where those unlucky in love may come to scribble the name of an unrequited love on a heart shaped ’ema’ and pray for a match. Opposite the shrine is Haritsuna Shrine, which in 1635 was the starting place of the first Inuyama Festival.

If you have a chance, fight the crowds and climb the hill to the castle. There will bound to be huge queues waiting to get in, but if you have enough patience to wait to get to the top you will be afforded amazing views of the festival below and the cherry blossoms in the hills that surround. For many the highlight of the day will come as dusk settles and 365 lanterns are affixed to each of the 13 floats. As each candle is lit (no electricity is used) the sun sets, bathing the town in a warm orange glow, intensified by the pink cherry blossom petals.

Once lit, the floats return to their starting points in their local communities, again winding through the beautiful Inuyama streets of shops, food stalls and and Edo-style frontages.

Getting to The Inuyama Festival

Where: Haritsuna Shrine, 65-1 Kitakoken, Inuyama, Inuyama 484-0081 (google map)
When: 7:50-21:45, April 7 and 8, 2018
Public Transport: Inuyama-Yuen and Inuyama Station on the Meitetsu Inuyama Line are a 15 and 11 minute walk to Haritsuna Shrine respectively.
Website: www.haritsunajinja.com

For a full listing of the day’s events, check out the ever excellent kikuko-nagoya.com