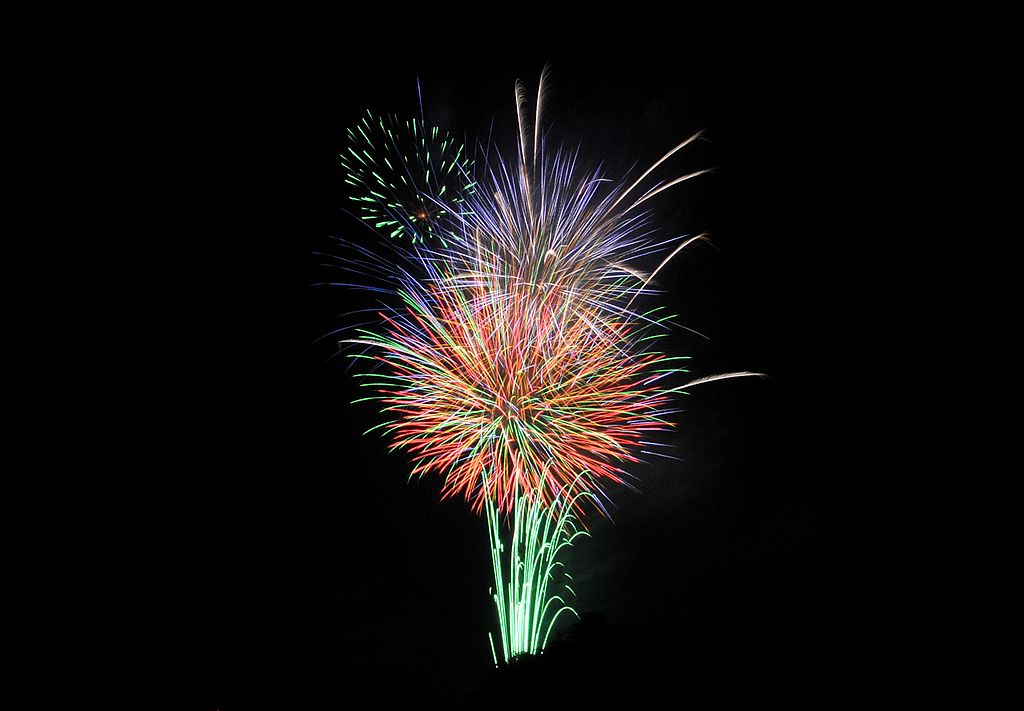 Summer in Japan just doesn’t quite work without taking in at least one fireworks show. Hiroshima has several, but the two big crowd pleasers are the Miyajima show in August, and what is called the Yumehanabi, or “Dream Fireworks” from Hiroshima Port in the Ujina district.

Formerly held directly in front of the Prince Hotel at Moto Ujina, the display has shifted slightly east. Several years ago construction was finished on a massive new pier, the 10,000 ton cruise ship berth intended to welcome anticipated Chinese and other cruise ships to Hiroshima, along with crowds of tourists eager to spend their money. The Hiroshima Port fireworks show is now held on the open water in front of the pier.

The show is a knockout. With the Seto Inland Sea as its backdrop, the firework artists paint the sky with blossoms, discs, strange hats and smiley faces. Some rockets ascend invisibly, others ride a spiral of ever-widening fire before exploding with a roar you can feel in your bones. A full hour of more or less constant fireworks, with periodic brief pauses followed by crescendos that have people asking, “Is this the finale?” A silly question. Some 10,000 fireworks are launched into the air over the hour-long show, and when the final assault comes there’s no mistaking it. The entire sky south of Hiroshima city seems to be on fire for several long seconds, and the booms echo back and forth from the hills for at least as long.

Of course, you’d expect a show like this to draw a crowd, and you’d be right. The organizers estimate that, in recent years, around 430,000 people have crowded into the area around the port to get a close-up look at the display. That’s a lot of people for such a relatively confined area. There are seats available, if you have the money and connections, and you can always rent a boat. There are even private aircraft that circle over the area, if you’re lucky enough to know a pilot.

The nice thing, though, is that you can enjoy the show from many points around town, and people do. Families with balconies or rooftop terraces hold parties, people gather on bridges and riverbanks leading to the port, or rent hotel rooms facing the piers. Some even climb into the mountains surrounding the city to watch from a distance of several kilometers. I’ve enjoyed the show from a number of different locations, none of them at the waterfront, and enjoyed it immensely. So do a little thinking ahead of time, ask around a bit, and pick out a likely spot. Or, if you don’t mind crowds, go ahead and wade into the throng at the port. It’ll probably be worth it.

Access: You can take any of the Ujina-bound buses or streetcars from Hiroshima Station, but expect full trains and long waits. As mentioned above, you’re probably better off arranging your own venue for viewing.

An excellent round-up of other local summer fireworks shows is located here: http://gethiroshima.com/features/art-entertainment/festivals/summer-fireworks-festival-guide/