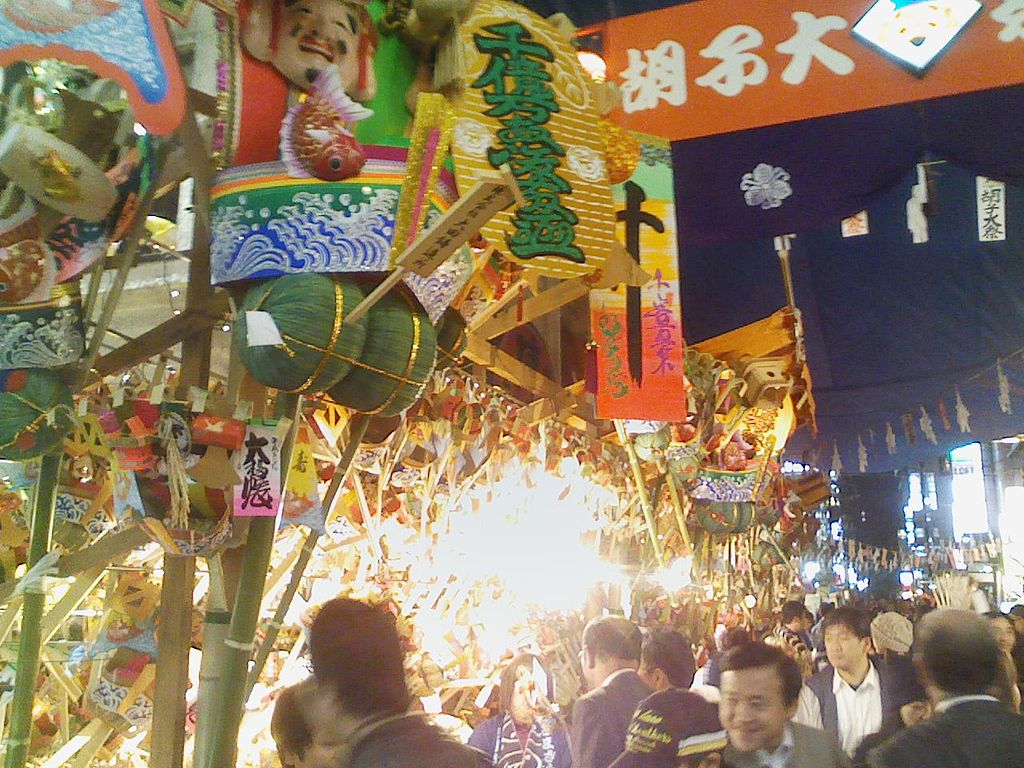 Across Japan, Ebisu is one of Shinto’s most popular deities. Deaf and lame, and always laughing (hence the Japanese term ‘ebisugao’ for a smiling face) Ebisu is the god of fishermen and good fortune. The old tenth lunar month was called ‘kannazuki,’ or the month without gods because the entire Shinto pantheon was said to hold an assembly at the grand shrine in Izumo. But Ebisu, deaf as a post, never heard the summons, and as a result was the only shrine god available for petition during this time. And that brings us to the Ebisuko Festival.

In Hiroshima, city merchants have long regarded Ebisu as a critical member of the sales team, and since 1603 the annual Ebisuko Shrine festival has been one of the city’s most beloved events. It’s never been skipped once in all those years. Even in 1945, a scant three months after the atomic bombing of the city, survivors gathered to observe the festival. You can find haunting old footage of a 1937 festival here, with images of area shop owners announcing sales and conducting a roaring festival trade. Locals are apt to call the festival “Ebessan,” indicating their easy familiarity with both the god and his big yearly party.

The shrine itself was once larger, but for many years now has survived as small structure tucked into Ebisu-dori, the easternmost section of the downtown shopping arcade. Presently, it stands between Labi, an electronics store, and the rear entrance to Mitsukoshi department store. For a casual visitor it can be easy to miss, but if you sit, say, on the second floor of the venerable Mont Blanc cafe just across the street and watch a while, you’ll see a regular trickle of local business owners walking up the steps to rattle the ‘suzu’ bell and pay their respects.

It all changes from November 18-20, right in the middle of that month without gods, when as many as 300,000 people visit the tiny shrine and the area adjacent to celebrate. The atmosphere can be raucous. The festival is right on the edge of Hiroshima’s sprawling entertainment district, and there’s a lot of passing back and forth between the two. In former years, local ‘bosozoku’ gangs of young bikers were a persistent and profoundly obnoxious presence, and though the police cracked down on them sharply following an especially bad year in 1999, there’s still a youthful, slightly crude air to the proceedings that only makes it all more appealing. On one of the nights (usually the first) the adjacent portion of Chuo-dori is closed to car traffic and stages are erected for dance, drums and kagura performances.

In front of the shrine itself, you’ll find a large wooden barrel that slowly fills with cash over the course of the festival, as people lob coins, thousand yen bills and even the odd ten thousand yen in to offer thanks and ask for continued fortune in the coming year. Since 1901, the festival has also been known for selling ‘komazarae.’ These are bamboo rakes, in all different sizes, decorated with gold coins, treasure ships and other talismans meant to attract money. Some even say the rake form itself is intended to “rake in” the cash. Wherever you go in Hiroshima, you’ll spot these hung over the doors and behind the counters of restaurants and izakaya all over town.

So, in brief, one of the city’s three big festivals, and an unchallenged fixture of its history for over 400 years. Come check it out, and go home with a great big ebisugao.

Access: There’s lots of paid parking within walking distance, but you’ll find it most accessible to take any downtown-bound public transportation and get off at Hatchobori. From there, walk south to Ebisu-dori.