Hanami is what the Japanese call “flower viewing,”  especially cherry blossoms (桜 sakura) with friends and family. In modern practice, hanami is enjoyed, especially by the younger generations of Japan, with copious amounts of food and drink. The practice is so popular that finding and securing a good spot in a popular park at peak season may require arriving the day before and essentially camping out on one. The experience is different depending on where you go and who you go with, but it feels a lot like the entire country is collectively casting off the winter in a sudden rush of energy.

If you are looking for a spot to enjoy the blossoms you are in luck, there are plenty of options available to you in and around Hiroshima.  While every year is different, in general, the cherry blossoms come out in Hiroshima between March 25 and April 4, but you can keep on top of the latest dates for Hiroshima using this site (in Japanese only) .

To get you started, here are the Top Hanami Sites near Hiroshima 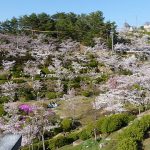 Senkoji Park, in the port town of Onomichi  is a popular tourist destination!  Besides being famous for cherry blossoms, after riding the ropeway up the mountain overlooking the city visitors are treated to panoramic views of surrounding areas, including the Seto Inland Sea, and Onomichi’s massive shipyards.  The park contains Senkoji Temple, founded in 806, Mt. Senkoji, and a wealth of open and “wild” spaces to roam.   Senkoji Park and its 10,000 cherry trees is rated as one of Japan’s 100 best sites for hanami.

Ueno Park is a small park in central Shobara City, but despite its size, the park’s 2,000 cherry trees are counted amongst Japan’s top 100 places for hanami!

Miyajima is considered one of the top three scenic spots in Japan!  There are a few attractions besides cherry blossoms on the island, including World Heritage site Itsukushima Shrine, the Virgin Forest of Mt. Misen, and an assortment of well-preserved shrines, temples, and historical monuments.   Perhaps its most famous attributes is the floating gate, or torii, of Itsukushima Shrine.  There are about 1300 cherry trees near the shrine and along the island’s many walking trails. Get a map (on your right) as you exit the ferry terminal and I would head for the big open clearing in Momijigadani Park.

Hiroshima Castle was established in 1589 and survived to see the Meiji Restoration and to be named a National Treasure of Japan in 1931.  Unfortunately the original was destroyed in the bombing of Hiroshima but reconstructed in 1959.  Its central location makes it the easiest to reach of the options on this list.  The best cherry blossom viewing spots are near the castle keep, but there are many good locations among 450 cherry trees around the castle grounds.

Hiroshima Peace Park, or Heiwa Kinen Kōen, is another centrally located option, and is in fact just down the street from the castle above, on an island that used to be part of the busy Nakajima merchant district that was destroyed by the bomb. Today, there are more than fifty memorials, statues, and other structures in the park, and 400 cherry trees can be found as you stroll the grounds; especially near the river.

Hakushima Kukencho is a popular spot on the stretch of land that fronts the Kyobashi River from Kohei-bashi Bridge near Big Wave Sports Centre and interrupted by past Hakushima near Ushita is broken Ushita O-hashi Bridge, and then continues down through Hakushima to Tokiwa-bashi Bridge just before the Shinkansen tracks cross the river. The sliver of the riverside park between Ushita Bridge and Kohei Bridge becomes what appears like a charming cherry blossom tunnel. Complemented by the fluttering of sakura petals. As the is no roadside footpath be wary of traffic passing through.

This is the hilltop park to the east of the city where you’ll also find the MOCA. Boasting approximately 1300 cherry trees that flank the paths that weave their way through park interspersed city views Hijiyama is certainly one of the most popular hanami sites in Hiroshima. A very lively place at night and a great spot for yozakura particularly as this year Shukkei-en is not accessible. They will shoo you out by 11 pm. Take any Ujina Bound tram from Hiroshima Station

Commonly known as Eba Yama, but its true name is Ebasarayama. It is South of the city. The park is not a massive space so150 cherry trees give it a lovely blooming atmosphere and amongst those includes a very rare specimen, discovered in 1944 and named the Hiroshima Ebayama-zakura. Take the Hirosden Eba tram to its endpoint and a short walk for there

Actually, it’s to the west in Yamaguchi Prefecture but very accessible by bus direct from the Hiroshima Bus Centre or train, JR Sanyo Line one hour to Iwakuni Station and a 25 min bus ride from there. The Kintai Bridge is a beautiful arched wooden bridge spanning the Nishiki River in Iwakuni and the riverside flanking it is full of sakura. Very festive particularly at night. Lots of good eateries locally. No BBQs allowed in the riverside park.

Photo: Flickr By Yasuhiro ARAKAWA [CC BY 2.0], via Wikimedia Commons