Getting Away in Japan: Okinawa 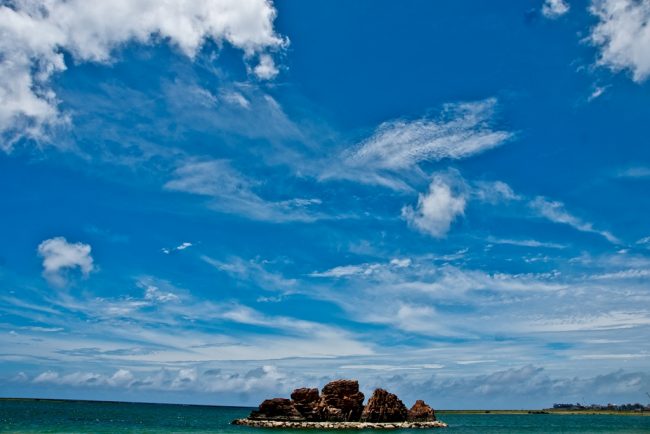 ByMark Guthrie
Getting Away in Japan, Okinawa Prefecture

Getting Away in Japan: Okinawa

Often referred to as Japan’s Hawaii, Okinawa is the primo vacation destination for Japanese, and with good reason. With beautiful beaches, stunning scenery, fantastic food, and friendly locals, there is so much to see and do, that anyone spending a length of time in Japan must find time to visit.

Okinawa is a string of islands that start off the coast of Kyushu and end up not far from Taiwan, and so many of them are beautiful places to visit. Each has a million and one different things to recommend them, and were I to list them all here; you would be reading all day and night. As such, I have included below just personal recommendations; keep in mind that much of this is personal opinion, and all tastes may not be catered to. Centered around its capital Naha, Okinawa Island (or Okinawa Honto) is the main destination for most tourists, which comes with its pros and cons. The former, however, far outweigh the latter.

While there are better beaches and seas on other islands, Okinawa Island is still home to some stunning places to swim and snorkel. Many of these are part of large hotel complexes, but Zampa Beach is excellent for sunning yourself, swimming, and beach games, and Sunset Beach, as the name suggests, is beautiful as the day draws to a close.

Off the shores, perhaps the biggest draw to Okinawa Honto is Chuarumi Aquarium, considered to be the best in Japan, with its giant whale sharks and manta rays. Off the beaten track, explore the Iriomote Jungle with one of the amazing tours – from hikes to kayaking – the subtropical forests are amazing.

For rest and recuperation at the end of the day, Naha’s Kokusai-dori is lined by izakayas in which you can enjoy local delicacies while listening to Okinawan folk music. If you want to live dangerously, have a few swigs on the ‘habuzake’ snake rice wine, said to give you strength! If you’re looking for beaches, beaches, beaches, then Miyako Island is the place for you. Maehama Beach on the southwest tip of Miyakojima frequently top lists of Japan’s best beaches, and not only is it an idyllic spot for sunbathing, swimming, and general beach frivolities, it is also host to beautiful sunsets.

Those with a passion for snorkeling will want to head to Yoshino Beach, where waters are crystal clear, and schools of brightly colored fish dart around you. The coral reefs in which this sea life makes its home is vast and just a few paces from the shore. Fortunately, if you don’t have your gear, then there is a rental store near the beach as well as showers and other facilities.

Away from the beaches, there are other attractions such as the Tropical Botanical Garden with over 1600 types of plants, the Cape Higashi-Hennazaki Lighthouse, and national cultural asset Tuyumya Grave that enshrines Nakasone Tuyumya, the leader of Miyako in the 16th century. Everyone that I have ever met who has been to Ishigaki Island raves about it. Like, crazy. The main island of the Yaeyama Island grouping, Ishigakijima, is a diver’s paradise. There are many tour companies on the island that can take you out to see some of Japan’s most amazing sea life in the cleanest of waters around some of the most beautiful islands.

Ishigakijima isn’t just for divers, though. From all of the beaches on the island, you can swim, snorkel and laze around. There are both white sandy beaches and those made up of bleached coral, all stunning and open year-round.

Transport on the island is infrequent, so car hire is recommended to explore. A little west of Ishigaki Port on Yui Road is Torinji Temple, said to be the first Buddhist temple built on the Yaeyama Islands, and next to this is National Important Cultural Property, Gongendo Shrine. Along the coastal road is Tojin Baka, a brightly colored – almost jovial – Chinese memorial to a group of laborers who were drowned or murdered while being transported from Xiamen (Amoy) to the USA in 1852. This is another island that comes highly recommended by friends of mine, particularly as a beach resort. Zamamijima has long, white sandy beaches which are less than a 20-minute walk from the port, and crystal waters into which you can dip for swimming or snorkeling if the heat gets too high.

If you want to get a little further into the ocean, there are glass-bottomed boats from which you can see all the varied sea life, and from January to March, there are whale-watching boat tours. For those who prefer a bit more seclusion, boat-taxis can take you to the nearby small uninhabited islands of Gahi and Agenashiku for swimming and sunbathing in relative peace.

There are plenty of hotels on the island, but if you do a little research, you can find B&Bs above the homes of local fishermen, where you will dine on the freshest of sashimi. For the more adventurous, beach camping is a recommended option, and for dining, Yapari Steak House near the port is a must, dishing up huge sizzling platters of beef with eat-as-much-as-you-like salad, rice, and egg soup.

Getting Away in Japan

This article is part of a Japan Info Swap series about traveling around Japan. Check out the others in the series here.