Getting Away in Japan: Kanagawa 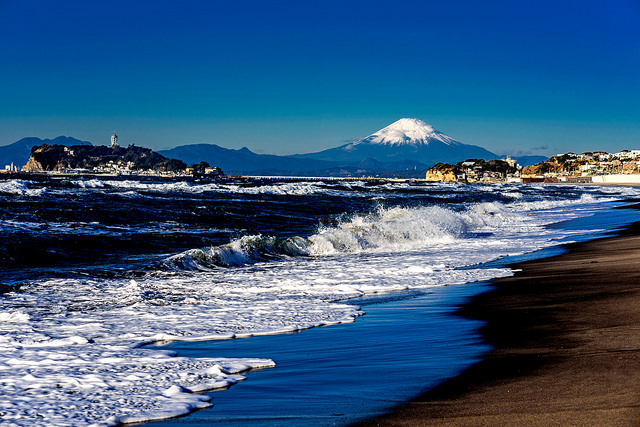 ByMark Guthrie
Day Trips, Getting Away in Japan, Kanagawa Prefecture

Getting Away in Japan: Kanagawa

Though Kanagawa Prefecture is often dismissed as ‘that bit next to Tokyo’, you shouldn’t let its relatively small stature when compared to its glamorous neighbor fool you; from bright city lights, beautiful nature and a long, celebrated history, there is a whole lot to see and do in Kanagawa.

Despite being the second biggest city in the country and only 20 minutes from the craziness of the capital, Yokohama manages to retain a sense of peace, neighborhood atmosphere and charm that makes it an excellent destination for a day trip to escape the hustle and bustle.

As well as having the breezy port area that rose to prominence following the end of Japan’s relative isolation in the mid-19th century, Yokohama has a creative arts scene, microbreweries, jazz clubs and great international dining. Whether it is in the delightful gardens, its plentiful museums or Asia’s largest Chinatown, there is always something going on in the city.

The island of Enoshima is the jewel in the crown in the coastal region of Shōnan in Sagami bay and has long been so, having drawn visitors to its splendor for more than 1,000 years. Perhaps one of the best things about Enoshima is wandering around the 4km island, a warren of criss-crossing streets and alleyways. On nice days you can follow them all around the island, past the temples, through the Samuel Cocking botanical gardens, via cafes and shops and over to the other side to the ancient caves and crab pools. At the top of the island is Enoshima Jinja, a shrine dedicated to Benzaiten, the Shinto goddess of music and entertainment, who folklore has it created the island.

As the island is quite hilly, walking around, particularly in the hot summer months, can be a challenge, but on the clear days when you can see across the water to mount Fuji as depicted by Hokusai, it is very much worth the energy.

Kamakura was once the defacto capital city of Japan. Though its period of power came to an end in 1333, Kamakura remains a beautiful city with an air of tranquility and calm, particularly around its many shrines and temples, lending it the title of ‘The Kyoto of the East’. The most important shrine in Kamakura, Hachiman-gū, was founded by Minamoto Yoriyoshi in 1063 and its entrance torii gates that lead up from the beach dominate the city. While Hachiman-gū is often referred to as the symbol of Kamakura, tell Japanese friends that you visited and they will most likely ask if you saw the Great Buddha (pictured above). With a height of 13.35 meters, the bronze statue of Amida Buddha stands on the grounds of Kōtoku-in Temple and is the second tallest bronze Buddha statue in Japan.

The Shonan beaches (around Enoshima and Kamakura) are extremely popular in the summer months for visitors from both Tokyo and Yokohama. As well as the sea and sand, the short train journey west along the coast is a quaint way to enjoy the stunning views, or you can rent cycles along the shore. The beaches themselves are of black sand and the waters can be rough, but this means that they are perfect for all manner of water sports, and all summer surfers will be seen dotting the water’s edge and the sounds of jetskis humming along the surface fill the air.

Hakone is one of the most popular destinations among Japanese and international tourists looking for a break from Tokyo, with a trip to Lake Ashinoko a must for visitors. Today, the lake with Mount Fuji in the background is the symbol of Hakone, and boat trips on the waters are a great way to enjoy the area, taking in the gorgeous sights of the mostly undeveloped shores, the mountains behind and the red torii gates of Hakone Shrine. For the more adventurous, Mt. Hakone offers some amazing hiking opportunities. The area is also well known for its hot springs, and if you want an onsen with a view, you can do no worse than gazing out over Mount Fuji as you soak in your spa. Of course not all spas in the area have the advantage of being in eyeshot of the nation’s most enduring symbol, but if you can find one – particularly during the time of the magical Diamond Fuji – there is possibly a no greater Japanese experience.

The undoubted food of choice in Kanagawa is the Shirasudon. This rice bowl, topped with thousands of whitebait fish called shirasu, is the area’s signature dish. There are many restaurants dedicated to it in the coastal regions, most of which serve the shirasu boiled. However, the local delicacy is the raw shirasu (nama shirasu), and it is the restaurants serving this that prove to be most popular, with the longest queues outside. As for drinking, there are many local beers brewed in the area. Particularly good ones include Enoshima Beer and Shonan Beer, though brave tipplers may want to try the Shirasu beer made with whitebait extract. It is particularly strong and something of an acquired taste.

Getting Away in Japan

This article is part of a Japan Info Swap series about traveling around Japan. Check out the others in the series here.

Photos: by Mark Guthrie (Own work)