The Floating Mikoshi of Miya Festival 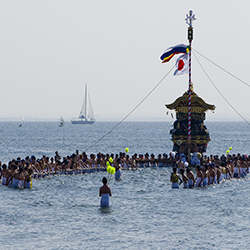 The Floating Mikoshi of Miya Festival

The Miya Festival is held annually on the third or fourth Sunday of October in Gamagori, Aichi Prefecture.  In 2014, this festival will take place on Sunday, October 26th 2014. Have you ever had a dream that resulted in the people of your town dragging immense mikoshi floats into the sea hundreds of years later? No? Ah, well that’s because you’re not the mayor of a 17th century Japanese town.

In 1696 Sazaemon, the mayor of Miya, which is now part of modern day Gamagori in Aichi Prefecture, dreamt that Yatsurugi-Daimyojin,  the god of the local Yatsurugi Shrine, upped sticks and moved onto the nearby Wakamiya Shrine by way of a portable mikoshi shrine. Of course, being a pious and important man, he quite sensibly saw this as a message directly from the god itself and instructed the locals to hold a ceremony marking this tremendous occasion.

And it’s a good thing that he did as the Miya festival continues to this day as one of the most impressive festivals in Japan. Occurring annually on the third or fourth Sunday of October , four immense dashi floats measuring six metres high (20ft) and weighing 4 tonnes are pulled from Yatsurugi-jinga by 300 loin-clothed men to Wakamiya jinga 1.5km away. Well, that’s how it was originally, anyway.

Arduous enough, you would think. However, in 1996 in order to commemorate the festival’s  300 year anniversary this was altered. Now, rather than simply moseying along the streets, they head to the beach to drag a huge mikoshi into the shallow water of Mikawa bay. Once there they follow along the coastline, waist deep in water chanting “Wasoi! Wasoi!” in unison for encouragement all the while, before dragging the sodden floats out of the water and onwards to the latter shrine.

It really is a breath-taking spectacle of physical endurance as well as a brilliant representation of tradition, so much so that last year it brought 50,000 people to the coastal town, many arriving early in the morning to bag the best beach spots. So, if you want to see one of the more original and spectacular local festivals, it is advisable to set that Sunday morning alarm early!

You can get to Mikawamiya Station 51 minutes away on the JR line from Nagoya Station, changing either at Gamagori or Okazaki. From there it is either a 7 minute taxi or bus, or a 20 minute walk. Map