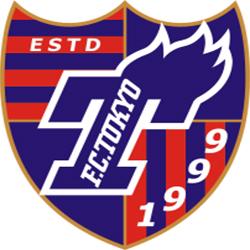 Japan is a nation that thrives on its sporting endeavors, and while it may be baseball that grabs most of the headlines, soccer is not far behind as the second biggest team sport in popularity. In March the new J League season kicked off to much fanfare, and the citizens of the capital will be crossing their fingers that the much supported team F.C. Tokyo will be marching on to J1 League glory for the first time in their history come the season’s end.

The beginnings of F.C. Tokyo

F.C. Tokyo come from humble beginnings and were founded as Tokyo Gas Football Club in 1935 spending most of their history hovering around the lower leagues. As recently as 1991 they were promoted to the 2nd division of Japanese Soccer. Despite their growing success, at this time they were overshadowed by their more illustrious neighbors Tokyo Verdy (previously Yomiuri F.C.), a team bankrolled by the same media organisation as the baseball behemoth Yomiuri Giants, who became the first Asian team to win the continental treble of the league, cup and Asian Club Championship in 1987.

However, in spite of a cooling of support for the J League as a whole, while Verdy began to fade, Tokyo Gas F.C. went from strength to strength. They finished second in the JFL and defeated three J League teams on their way to the Emperor’s Cup quarterfinal in 1997, before winning the JFL the following year. Unfortunately, despite their successes on the field Tokyo Gas F.C. did not meet the requisite qualifications to join the J1 League, the top tier of Japanese soccer. But that would soon come.

Following the previous season’s disappointment the Tokyo Gas Company joined forces with other local companies with the aim of meeting the J1 League requirements for promotion. That season, with those requirements met, they finished second in the J2 League, qualifying for automatic promotion to the Promised Land of the J1 League. It was widely assumed that the newly promoted side would struggle to compete at the higher level, but they confounded the non-believers, winning the first four games of the season and finishing in seventh place.

This success, combined with the decline of Tokyo Verdy, saw attendances rise and the team quickly became the best-supported in the capital. The beginning of the century saw the team managed by Hiromi Hara who instilled an attacking ethos in F.C. Tokyo, a style of play that they would soon become famous for. This tactical style was exemplified by their star forward, the Brazilian Amaral, the team’s talisman from 1992 to 2003, perhaps the greatest player in the team’s history upon whom the biographical movie ‘The King of Tokyo o Filme’ was based.

Though Amaral left the club at the end of the 2003 season when they finished in fourth place, their highest finish to date, his legacy lived on. F.C. Tokyo continued their attacking football under Hara bringing them their first top level success in the following season, the J. League Cup. This victory cemented them as a true contender, buoying their already high attendances. The following seasons however resulted in average league positions, rarely bothering the upper echelons of the table. But in 2009, with a young Yuto Nagatomo in their team (whose name would go on to adorn thousands of replica shirts in Japan in the colors of Italian giants Inter Milan), they repeated their 2004 success, again winning the J. League Cup. The next season saw them reach a then unprecedented semi-final in the Emperor’s cup, but that glory was overshadowed by their league finish of 16th place, resulting in relegation back to the J2 League.

With Nagatomo leaving for Italy (before which he made a farewell speech in front of 25,000 F.C. Tokyo fans) things looked bleak for the capital’s number one team. However promotion proved to be little more than a formality as they topped the 2011 J2 league, whilst at the same time winning the Emperor’s Cup for the only time in their history . This was a staggering achievement for a team in the second tier, meaning they would not only face the top teams in Japan the following year, but also the biggest names in Asia in the Asian Federation Club Champions League.

Since then F.C. Tokyo have remained in Japan’s top division, and though they have reached the semi-finals of both cup competitions, they are still looking for their first J1 League success. Their opening game of the season saw them tie impressively with last year’s champions Gamba Osaka 2-2, and at the time of going to print remain undefeated and sit in second place in the league. They still play to crowds of over 25,000 (which when compares pretty favourably to the 39,000 of footballing giants AC Milan in soccer-mad Italy), all of whom will be preying that this will be their year. They are coached by Italian Massimo Ficcadenti, the first Italian manager of a J. League club who has brought with him his compatriot Michele Canini from Atalanta to help cement a back line that kept a club record of 14 consecutive clean sheets last season. They play their home games at the 50,000 seater Tokyo Stadium, a ground they share with Tokyo Verdy, and perhaps this is the year they finally make it to the top. So why not dress in red and blue and get along there to support your local team and shout the team slogan “Bello e Aggressivo!” Go F.C. Tokyo, beautiful and aggressive!