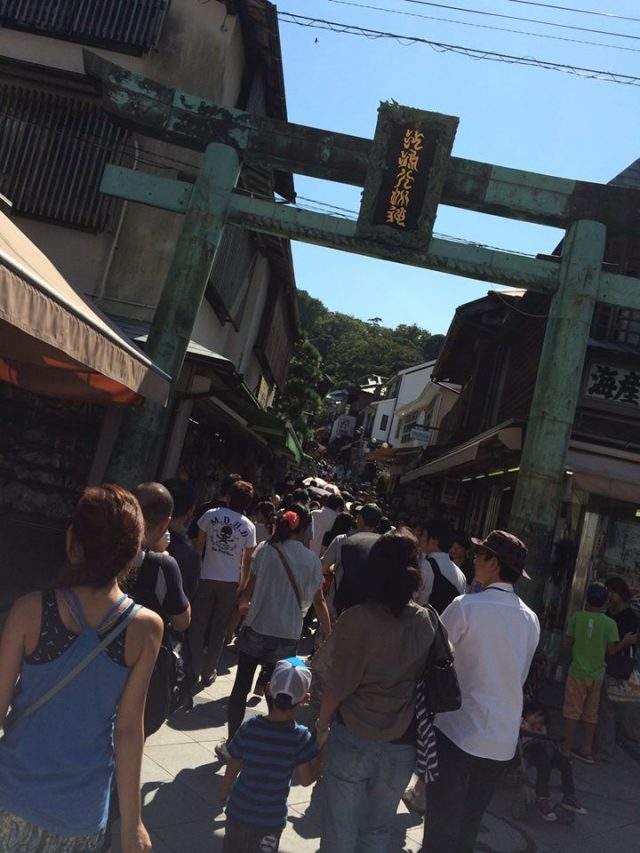 Just 50 km southwest of Tokyo city center there lies an exquisite island of such natural beauty you wouldn’t be surprised to find it inhabited by celestial beings. So be not surprised, because that is precisely what you will find.

The island of Enoshima is the jewel in the crown in the coastal region of Shōnan in Sagami bay and has long been so, having drawn visitors to its splendor for more than 1,000 years. Given its locality to Tokyo, that is not about to change any time soon.

The history of Enoshima Island

According to the Enoshima Engi, a two part history of Enoshima written by the Japanese Buddhist monk Kōkei in 1047 AD, villagers in the Enoshima area were plagued by a five headed dragon called Gozuryu for 1,000 years. Then, in 552AD Benzaiten, the Shinto goddess of music and entertainment, rose the island from the waterbed to act as her home. With a celestial display of her magnificent powers, she entranced the dragon who fell in love with her. The dragon of course professed his feelings, but Benzaiten spurned his advances, and in doing so made the dragon realise his shame for treating the people so badly. Vowing to leave the people in peace, he turned to face the island home of his beloved, and remaining motionless through time transformed into a hill that remains to this day Tatsu-no-kuchi yama, Dragon’s Mouth Hill.

Since then the goddess Benzaiten is enshrined upon this island making Enoshima – along with Chikubu Island in Lake Biwa and Itsukushima Island in Seto Inland Sea – one of the Three Great Benzaiten Shrines.

As well as religious treatise, Enoshima also features in one of Japan’s most famous works of art. The island and the inhabitants who lived there is number 17 in the yukio-e series ‘Thirty-Six views of Mount Fuji’ by Katsushika Hokusai (1760–1849).

But the island is not just a place that is enraptured with the past, it is also a thriving hub of tourist activity today. Other than its beautiful surrounding beaches which arre a draw for both Tokyo families and youth alike in the summer months, the biggest draw to Enoshima is the aforementioned Enoshima Jinja, shrine of Benzaiten. This shrine features the goddess in a state of undress (also known as ‘Hadaka Benten’) which is an unusual state in which to find her. There are also many other shrines and temples around the island, including one specifically for couples featuring a lovers bell.

The beautiful island also features the Samuel Cocking Garden, botanical gardens named after a British merchant  (who amongst other things is credited with introducing the lightbulb and the bicycle to Japan) who in the 1880s owned the highlands of the island and set up an extensive greenhouse of tropical plants. The original was destroyed in the great Kanto earthquake of 1923, but the foundations were rediscovered in 2002 and have since been restored, seeing over 500,000 visitors a year.

Another draw to the city is the Enoshima Aquarium, which though not on the island itself, is hugely popular. It features amongst other things, dolphin shows, killer whale shows and all sorts of marine life. Towards the end of the summer it is open in the evening for the night aquarium experience, after which you can visit one of the many delightful restaurants along the sea front. But be warned, both the aquarium and the restaurants can become extremely busy in summer.

These sights aside, perhaps one of the best things about Enoshima is the joy of wandering the 4km island, starting on the foot bridge that connects the island with the mainland and overlooks the beaches of frolicking families, surfers and jet-skiers, the island is a warren of criss-crossing streets and alleyways. On nice days you can follow them all around the island, past the temples, through the botanical gardens, via cafes and shops and over to the other side to the ancient caves and crab pools. As the island is quite hilly, walking around, particularly in the hot summer months, can be a challenge, but on the clear days when you can see across the water to mount Fuji as depicted by Hokusai (best viewed on clear winter days), it is very much worth the energy.

The undoubted food of choice in Enoshima and the surrounding areas is the Shirasudon. This rice bowl, topped with thousands of whitebait fish called shirasu, is the area’s signature dish. There are many restaurants dedicated to it, most of which serve the shirasu boiled. However, the local delicacy is the raw shirasu (nama shirasu), and it is the restaurants serving it that prove to be most popular, with the longest queues outside. For those turned off by the thought of eating thousands of baby fish in one sitting, there is plenty of other seafood to choose from.

As for drinking, there are many local beers brewed in the area. Particularly good ones include Enoshima Beer and Shonan Beer, though brave tipplers may want to try the Shirasu beer made with whitebait extract. It is particularly strong and something of an acquired taste.

Getting to Enoshima Island

From Tokyo you can take the JR Odawara line to Fukisawa and take the Odakyū Enoshima Line to Enoshima. From there the island is a pleasant 1.7km walk.