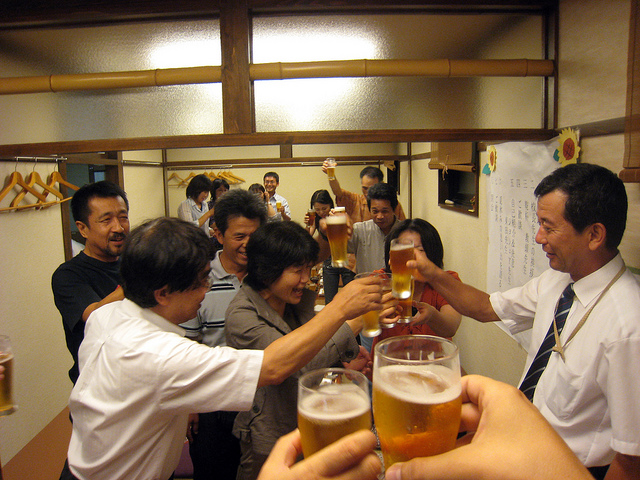 ByMark Guthrie
how to Starting work in a new office can be pretty stressful. Each office can have its own particular rules and culture, and this is particularly true when in a new country. While some things remain the same, there can be vast differences between the way things were back home to how they are in Japan.

One of these such cultural differences is the ‘enkai,’ or office party. If you come from a country where clocking out means clocking off and going home, these after-hours get-togethers can seem strange, if not a little daunting, but they are an integral part of how the Japanese office unwinds and bonds. Enkai are held to mark a wide range of events, including completion of significant projects, attainment of set goals, foundation anniversaries, school sporting events, entry of new coworkers, and retirement of senior employees, and are an essential social aspect of work-life.

While some of you may take to these parties like a duck to water, for others they can be a little daunting as, like so much of Japanese culture, there are many rules of etiquette to follow. Fortunately, we here at Japan Info Swap have learned the hard way, foolishly breaking all of these rules repeatedly so that you don’t have to.

Do turn up on time. While in the west it may be cool to turn up fashionably late, that’s certainly not the case here in Japan. The party won’t start until everyone arrives, so don’t dawdle. With that said, sometimes things are beyond our control, so if you are unavoidably delayed, do call ahead and request that they start without you.

Don’t just get stuck in. As mentioned, the party has an official start time, and this will usually begin with a short speech from a manager, followed by group ‘kanpai’. The raising of everyone’s glasses together signifies the start. It doesn’t look too good if your glass is only half-full, and you are already half-cut! Also, if you want to get some serious gaijin brownie points, there is a special way to kanpai. Learn how to here. Do pour the drinks. Whether a relaxed, after-hours bite with colleagues, entertaining clients or an official party such as a retirement, there will be a fair bit of drinking involved. In fact, another name for an enkai is ‘nomikai’, or drinking party. Often the standard drink will beer, with either large bottles or jugs on the table to share. An important part of this is pouring for others, and not for yourself. Top up everyone’s glass as often as you can, as showing understanding of this custom will ingratiate you with your colleagues, and they will return the favor. But keep an eye out for full glasses because…

Don’t feel pressured into drinking. You don’t have to drink if you don’t want to, it isn’t compulsory. However, if you don’t, expect to field questions on why you aren’t drinking – and ‘I’m driving’ isn’t usually considered a good enough excuse, because why on earth would you drive to a nomikai?! – all night, from everyone. There are two useful techniques to avoid this. One is to accept your beer glass with good grace, but leave it untouched.  Well, hold it in your hand occasionally, but don’t from drink it. Another is to order ginger ale from the waitress quietly. It looks enough like a whiskey highball to avoid questioning.

Don’t wear the toilet slippers back to the table. At every nomikai someone does just this and will face light ribbing for the rest of the night. Just try to make sure that this fate isn’t yours. Do join a nijikai (if you want!). Once the enkai has finished, usually after two hours, there will undoubtedly be a ‘nijikai’, or second party. These will be more relaxed, and can quite often be more enjoyable, with most of the rules mentioned above no longer applicable. Nijikais will take place at a more casual restaurant, karaoke, or even at ‘kabakura’ hostess bars, depending on with whom you are partying. But if you aren’t feeling up to it, feel free to say ‘no’, as there is zero obligation to join.

Don’t worry too much about the rules. If there is one thing that Japanese understand, it’s that their customs can be pretty perplexing for foreigners, and as such, they will forgive pretty much every transgression of these rules, so relax. However, if you can demonstrate a knowledge of these rules, there will be some impressed faces all around.