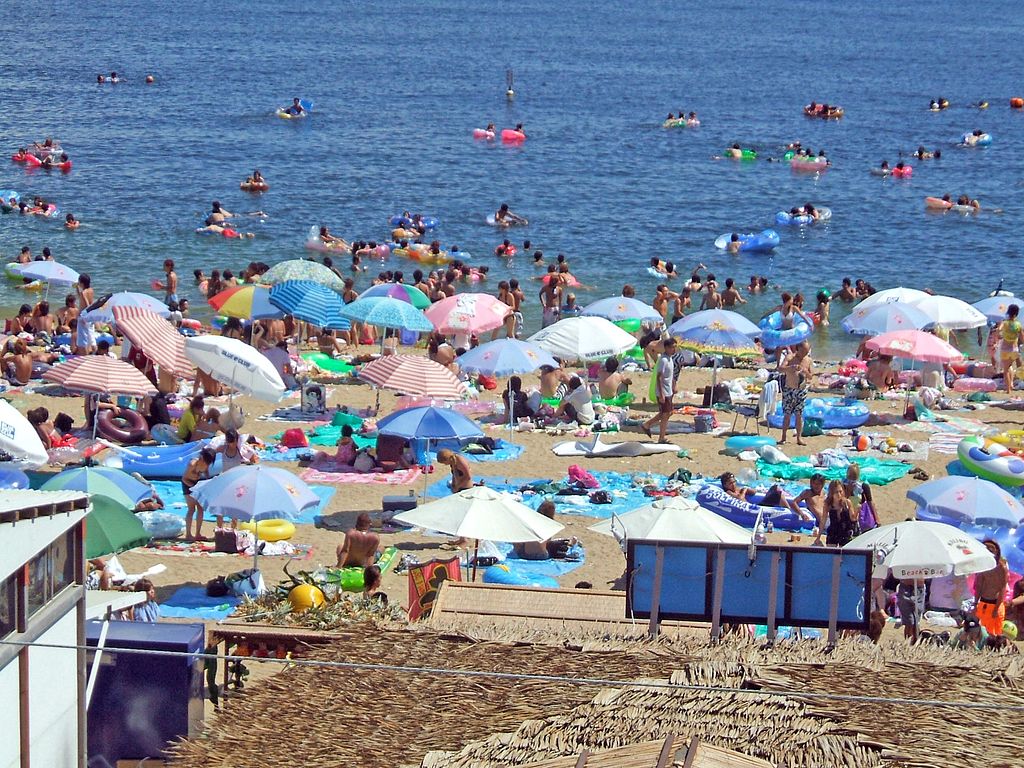 Kobe is a vibrant city famous for its beef, port, lush parks, and of course, Mount Rokko. What’s not so well known is that it also has some great beaches that are popular in the summer months with swimmers and sunbathers looking to relax and cool off. Here is a short list of some of the best beaches in and around Kobe. But be sure to get there early so that you can grab the best spot!

One of the most popular beaches in Kobe is Suma beach, located in Suma Seaside Park not far from the city center on the west coast of Kobe. The beach is a 1.5 kilometer stretch of sand that is the perfect setting for a quiet sunset walk in the milder months. However, things get much busier come the summer, with locals and tourists alike flocking to sunbathe and swim in the sea. The seaside park has all the necessary features to attract the tourists – pretty palm trees, bars, ice cream stalls, with a view of the famous Akashi Kaikyo bridge off in the distance. Suma beach is excellent for a swim, nice and deep but with no giant waves pummeling swimmers to the floor. For those who want to stick around into the evening, there are plenty of late night restaurants and bars nearby. The beach is right next to Suma Station.

Azur Maiko beach is an 800-meter stretch where white sand meets the clear blue waters of the Japan Inland Sea. Situated within Azur Maiko park, it doesn’t get as congested as Suma beach but has a buzzing atmosphere during the summer months. The name Azur is French for “blue”, and ideal for describing the crystal-colored waters that spread out towards Awaji Island in the distance. The sea here is great for swimming in and awarded for its high quality by the Department for Environment. It’s clear enough to see fish swimming around you as you bathe. The seaside park has all the facilities you would expect and is a popular resort for picnics, fishing, BBQs and sunset views.

Okurakaigan beach sits on the border of Kobe and neighboring Akashi. It’s a lovely relaxing beach right next to Asagiri Station with the Akashi Kaikyo bridge and Awaji Island in view in the background. The sand quality varies across the beach, but there are enough pleasant areas to pitch out a towel. This beach is popular with BBQ fans as there is a dedicated BBQ area with equipment that people can use for a small fee (you need to bring your own food). Swimming is permitted during the peak season (July & August) when there are lifeguards on duty.

This beach situated on the nearby Awaji Island is something of a hidden gem. While the crowds flock to the more popular Suma beach, those wanting something a little more secluded and relaxing can make the short journey to enjoy the white sands, clear waters and herbal hot springs of Taganohama beach. It’s small, but that’s not a worry as it doesn’t attract big crowds so you won’t have to share the space with too many. Ideal if you want a nice swim but also want to avoid the hustle and bustle of tourist beaches. The beach can be reached by bus from Sannomiya station or by driving or cycling over the Akashi Kaikyo Bridge.