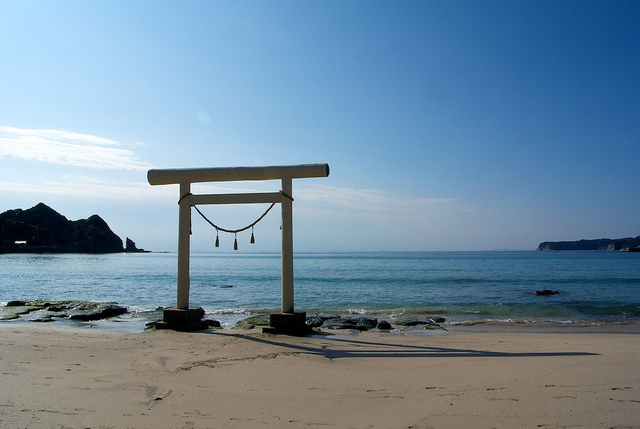 As the summer heat rises it’s tempting to retire to your air-conditioned room with your necktie fan on full blast. However, with Japan being an island nation we are completely surrounded by the sea, and thus, beaches. So get out from that darkened room and head for the coast.

Beaches in Japan may seem like something of an alien experience on the first encounter. For a start, very few people actually make it into the water, no matter how inviting it is. The water is predominantly reserved for children and flirting students. Those who do make it into the water generally find it shallow – particularly at the manmade beaches – which makes the mass preponderance of floating devices rather confusing.

The majority of people prefer to stay on the shore under parasols or tents that are rented or brought from home (sunbathing is unusual) while for the more energetic there are often rigorous beach games such as volleyball. Most beaches have small restaurants or huts selling food, snacks, and drinks (it is usually accepted to drink alcohol on Japanese beaches), and some places even have barbecue sections where you can grill your food. There is usually a lifeguard on duty and a beach house (umi no ie) at which you can shower and change. Some even have lockers in which you can leave your valuables. 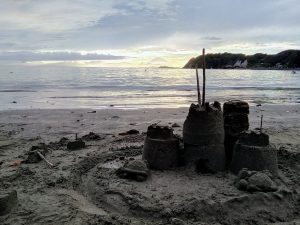 Perhaps the easiest beach to get to from both Tokyo and Shinjuku stations due to the frequent and relatively cheap train services to and from here, with stops in Kawasaki and Yokohama along the way. Once arriving at Zushi station, you won’t even need to worry about so many details since the abundant shops, stands and bars line the roads on the way to the beach.

The beaches of Kamakura are extremely popular in the summer months for visitors from both Tokyo and Yokohama. As well as the sea and sand, the 4km island of Enoshima, a short train journey west (or even a beautiful coastal bike ride should you wish to rent bicycles) is a pleasantly touristy distraction with Enoshima Shrine, caves, and a nearby aquarium. Try the local shirasu fish delicacy.

Ninety-Nine Beach is the colloquial name given to Kyujukyurihama on the eastern tip of Chiba. It’s known for its great view of the first sunrise of the year, but it’s a great place in the summertime too.  Because of its undersea topography and relatively strong onshore winds, you shouldn’t swim out of sight of the lifeguards, but the wide sandy beaches and occasional tasty seafood outposts make it a very nice day trip. 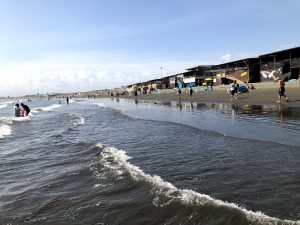 A holiday destination for Japan’s Imperial family since 1984, Hayama-Isshiki beach is considered to be one of the best beaches in Japan thanks to its high-quality sand and the fact that it is less crowded than some of the other popular beaches. If you aren’t a fan of sand there are lawns on which to loll, and if you want to get a bit sporty then bodyboarding, windsurfing, and jet skiing are all allowed.

The white semi-circle flat sandy beach of Onkjuku on the Boso peninsula is considered so beautiful that it has inspired a children’s’ song, a fact represented by statues of camels carrying a prince and princess on their backs. Partially due to its fame, Onjuku is a particularly popular beach, especially amongst young adults who come to meet, surf, ride banana boats, and party with each other throughout the summer.

Something of a tourist haven, the town of Ōarai attracts 3 million visitors a year, drawn to such attractions as water sports, the aquarium, the golf course, and, of course, the beach. With clear water, white sand, and surfers bobbing in the silver crested waves, the Ōarai, and Sun Beach Bathing Beaches, are known for being some of the most pleasant in the Kanto region. They are shallow beaches that become extremely popular in the summer months with plenty of activities to keep you occupied. Camping facilities are available.

Thanks to its rocky outcrops and bright blue sea, Ubara beach was selected as one of Japan’s ‘100 Most Scenic Beaches’. Ubara beach is a little light on the entertainment side of things – there are few public facilities and just a handful of small restaurants – but it more than makes up for it with its outstanding natural beauty. It’s not somewhere to come to party, but the shallow, peaceful waters are ideal for reflecting on the sheer splendor of Japan’s coastline. Being less crowded –and windy – than other spots, it’s a perfect place to bring the kids.