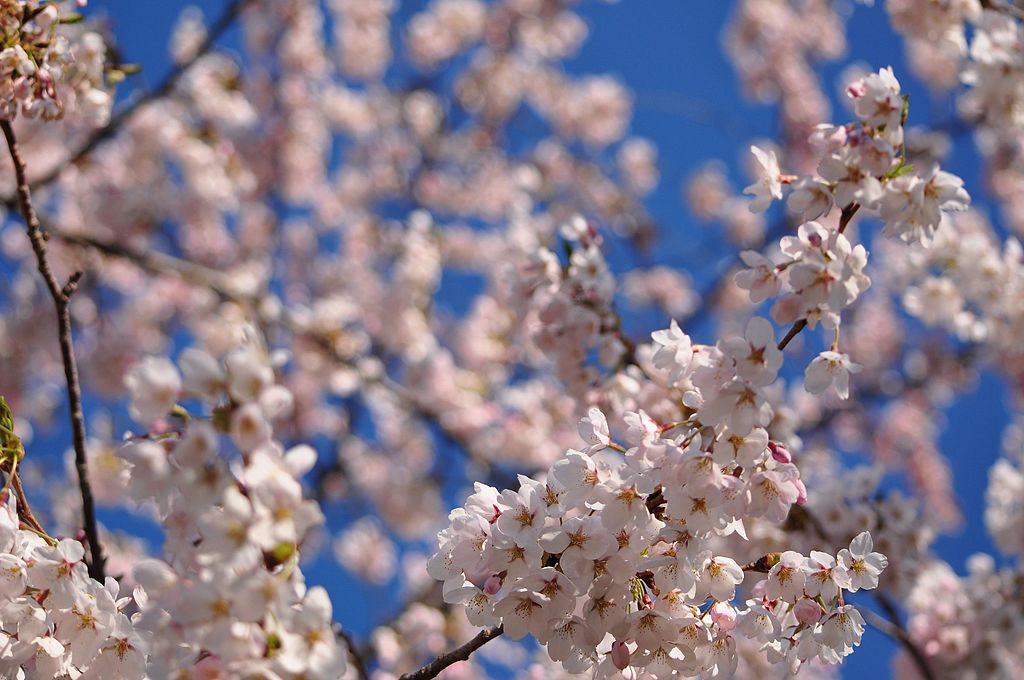 Spring is just around the corner, which for many Japanese residents means Hanami time is here again. Hanami means “flower viewing” in Japanese (from the Japanese for flower – “hana”) and, up and down the country, people gather together to spend time with each other and appreciate the beauty of the blooming cherry blossoms (“sakura”).

Hanami is a tradition that dates back centuries in Japan. Each region has its favored hotspots where groups of people organize picnics and small parties as they take in the delights of the season. There are several wonderful Hanami spots around Kobe’s many parks and mountains that will be busy from around mid/late March. Here are some of the best places to head.

For information on when best to plan your Hanami in the Kobe area, see here (in Japanese).

Located on the slopes of Mt. Hachibuse and with Suma beach at its base, Sumaura Park is a great place to see not just the cherry blossoms but also some splendid views of Kobe across the sea. It’s one of the most popular Hanami spots in Kobe, although luckily it tends not to get too crowded. You can take the ropeway cable car from Sumaura Park station and bask in the glory of over 3,000 cherry blossom trees, as well as many plum blossoms. If you look out across the sea, you’ll be able to see the Akashi Kaikyo Bridge as well as Kobe airport. If you don’t fancy a picnic, there are restaurant facilities in the park as well as a kids’ amusement park at the summit.

Another park nestled in the mountains offering spectacular scenery, Egeyama Park is 85 meters above sea level and its kilometer-long winding path that stretches along the coast brims with around 1,400 cherry blossom trees that bloom as early as mid-March. The park is only a 5-minute walk from Kamisawa subway station, and there is plenty of picnic space on the grassy areas, where you can take in the views of the flowers, the sea and watch the dog-walkers and joggers go by.

Okusuma Park has a stunning collection of cherry blossom trees as well as many other treats to savor. One of the best places in Kobe for biodiversity, the park also consists of natural forest, seven ponds, terraced rice farming, water features, open fields and an array of wildlife including Indian Kingfishers and Japanese Pygmy Woodpeckers. The park is a 15-minute walk from Myohoji station or a short bus ride from Suma station.

This six-story 17th-century white wooden castle in western Hyogo is a UNESCO World Heritage site and its grounds fill with visitors from across the Kansai region every late March and early April for Hanami. It’s one of Japan’s largest castles and has acquired the nickname of White Heron Castle (for looking somewhat like a white heron from a distance). There are approximately 1,000 cherry blossom trees in the castle grounds that become illuminated at night during the blooming season. Many Hanami-related events are held on the castle’s grounds, including the Kanokai – a sakura viewing party featuring traditional Japanese music.

More information: Why You Need to Pay a Visit to Himeji

Honoring the spirits local war heroes, Gokoku shrines are located in most cities across Japan and they provide serene sites for reflection and relaxation among nature. The park surrounding Kobe’s Gokoku Shrine is lined with sakura trees that bring a lovely colorful glow to the historic monument during the cherry blossom season. This location has become a favorite for hanami in Kobe thanks to the nighttime tree illuminations, which invite the social gatherings to persist well into the evening.

Shintaro Sasabe, also known as “the Sakura Doctor,” dedicated his life to preserving the Japanese cherry blossom, and Okamoto Minami Park was built on the land that was once his home. In addition to making incredible sakura-themed artwork, Sasabe-san was an avid collector of cherry blossom trees. The park, now owned and run by the city government of Kobe, showcases these preserved trees of different varieties and offers information regarding each one.

Oji Park is a multi-facility space that features a zoo, an athletics stadium, a sports center, and a gallery. There are around 700 cherry blossom trees within the park and every year, during the Hanami season, the zoo offers free evening admission allowing visitors to stroll the grounds while the trees lining its paths are lit up. You can reach Oji Park by traveling to Oji Koen station and it’s a 3-minute walk from there.

Tips for those with picnic plans

One of the best and most popular ways to enjoy Hanami is with a picnic with friends or family. Many of the parks and venues permit picnics but make sure you check first to avoid disappointment. Here are a few other Hanami picnic tips:

Must have Hanami Gear