The Tokyo Game Show is an annual trade show for video game developers held at Makuhari Messe Convention Center just outside Tokyo. First held in 1996, the Tokyo Game Show is among the world’s biggest video game related conferences.  It is well attended by big-name game developers to launch new products and display their latest innovations and advancements, and the video game consuming public who attend looking to see what is fresh and hot this year in gaming. 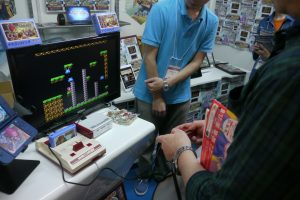 This used to be relegated to the latest in PC, console, and arcade gaming but since 2013 or so, TGS has opened up to mobile and VR gaming in a major way. What this means is that you may find yourself in the position to simply scan a QR code while in the venue on the convention floor and end up beta testing the next mobile gaming sensation or unlock exclusive stages and loot if you’re already a fan of certain games.

Every last aspect of gaming is on parade at TGS so expect to mix it up with professional gamers, developers, pundits, artists, exporters, testers, cosplayers, and general game nerds like myself whenever you turn up.

This year’s show is held over four days, the first two days are business days, which are invited only for industry insiders and company representatives.  The third and fourth days are open to the public for a small entrance fee of JPY 1,200 on the day, 1,000 advance.

Some cool new stuff is going to be on display inside!