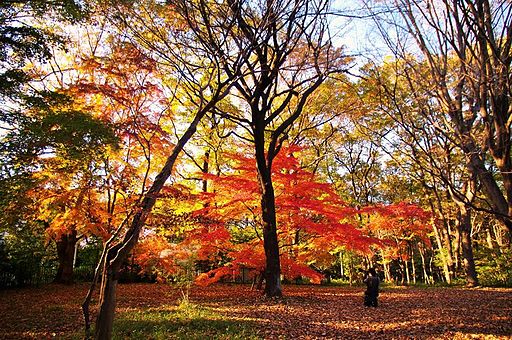 There is only a relatively small band of latitudes across planet earth where the chlorophyll in the leaves of deciduous trees breaks down when the daylight shortens in the fall and the natural colors of red and orange and yellow remain. Japan is one of the fortunate places in that band. The natural phenomenon has spawned a tradition in the country of “leaf peepers” banding together to visit the most scenic locations. It even has its own name – momijigari, roughly translating to “hunting red maple leaves.”

Japan is a country blanketed in trees. Nearly three-quarters of the landscape is considered forested which creates plenty of opportunities for momijigari in the mountains but there is also an abundance of nature’s eye candy in and around the cities where trees are treasured pieces of the landscape. The show begins in September in the northern islands and spreads southward into the lower elevations with the drooping temperatures; leaves around Kobe remain radiant into December.

Japan also has scores of botanical gardens and arboretums that attract the leaf hunters. Maple trees have traditionally been favorite plantings in Japanese gardens and shrines. Ginkgos, ichos in Japanese, are also widely see in ornamental gardens and their brilliant yellow foliage is a standout in Kobe area traditional gardens.

The Kobe City Forest Botanical Garden was established in 1940 as part of a plan to honor 2600 years since Emperor Jimmu ascended to the throne. The goal was to “provide views of seasonal deciduous trees and flowers” for the people of Kobe, courtesy of the city. Since that time, some 1,200 different trees and shrubs have been planted from around the world, roughly arranged in the park according to their country of origin. The arboretum spreads across 142.6 hectares in the shadow of Mount Rokko making it one of the largest “tree museums” in Japan.

In November the Kobe City Botanical Garden is given over to the World Forest Maple Leaf Tour. Three trails meander through the forests offering anything from a casual stroll to a spirited hillside climb where your purchase is views all the way to the sea. No matter what your hiking plan, all paths must eventually lead to Hase-Ike Pond located near the center of the arboretum. Here branches of spreading maples bend over the surface of the water coloring the surface in deep reds and oranges.

Not content to leave the color spectaculars to Mother Nature, The Kobe City Forest Botanical Garden’s underground tunnel, usually given over to green leaves, is instead enlivened by an illuminated autumnal display and out on the grounds the natural tunnels of Japanese maples are lit up after 4:30 p.m. 4:30 is normally the hour of last entrance at the Kobe City Botanical Garden but during the World Forest Maple Leaf Tour the last entry is pushed back to 6.00 p.m. to enjoy the illumated leaves.

The park is open every day during November and an entrance fee is charged. There are guided tours available and a quiz rally for showing off your knowledge of kouyou, autumn leaves.

By Parksj-musashi (Own work) [CC BY-SA 4.0], via Wikimedia Commons