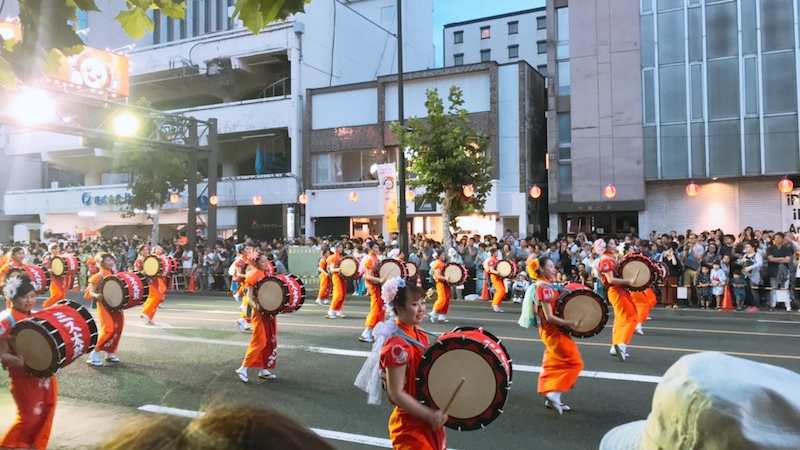 Mention the name, ‘Sansa,’ and many people will inevitably think of the character Sansa Stark from, ‘Game of Thrones.’ The word, ‘Sansa,’ in Morioka, however, is all about dancing and the annual festival. The Morioka Sansa Odori Festival is held every summer in August from 1-4 and is one of the major festivals in Tohoku. With over 10,000 taiko drummers, it is listed in the Guinness Book of Records as the largest taiko drum festival in the world.

Local schools, businesses, and organizations form groups of dancers, drummers, and musicians to take part in the event. Practice begins as early as late May, and for the next few months, the dance is fine-tuned for the event.

The dance celebrates the legend of a demon who was terrorizing the locals and who was punished by the god of Mitsuishi Shrine. The demon pledged that he would stop and swore his oath by placing his hand on a large rock. The imprint of his hand can still be seen today at Mitsuishi Shrine and of course, the name, ‘Iwate,’ is comprised of two kanji, the first meaning rock (岩)and the second meaning hand (手).

The parade is held on Chuodori and runs for approximately 1km through the city. It starts every night at 6 pm and finishes at 9. Most people stand and line both sides of the street, but there are some bleachers across the road from the Prefectural Office if you want to take a break and sit down.

Food and of course, beer and other drinks are available from yatai which can be found along the entire street and also on some of the roads running off Chuodori. I think the best ones are in the Sakurayama area, just in front of Sakurayama Shrine.

Many locals and not just the dancers, like to dress up in their summer yukata for the occasion but of course, anything is okay! The weather is usually quite warm, and a light sprinkling of rain isn’t unusual. Walking around with an umbrella is tiresome for both you and the people whose eyes you might nearly poke out in the crowd, so my advice is to take a raincoat or forget it and enjoy getting a little wet.

If you aren’t in the parade but still want to join in the dance festivities, don’t despair! Wa-dori (Dancing-in-a-circle) is performed at the central area in front of the Prefectural Office and across seven other places around town. Turn up, and you’ll be invited to join in!

For more information, check out the English version of the Morioka Sansa Odori Festival website: