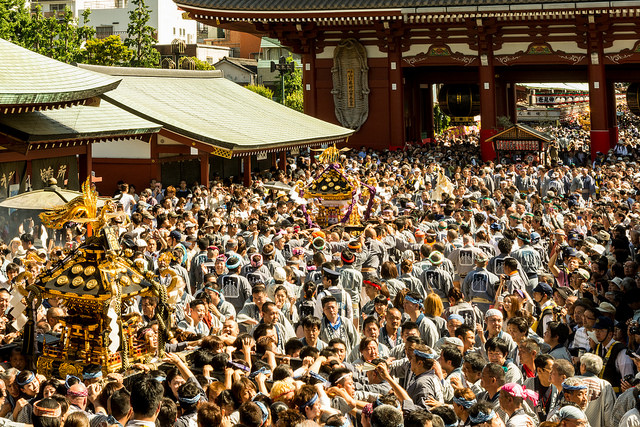 Tokyo has many festivals, and particularly as we head towards the summer months they will be coming thick and fast. But none are quite so wild as Sanja Matsuri in Asakusa.

The History of Sanja Matsuri

On the morning of March 18, 628 CE, so the story goes, two fisherman brothers, Hinokuma Hamanari and Hinokuma Takenari, found tangled in their nets a statue of the Bodhisattva Kannon, the Goddess of Mercy. Upon hearing this the chief of their village, Hajino Nakatomo, approached the fishermen, converted them to Buddhism and took the statue into his home. That home was the beginnings of Senso-ji Temple, Tokyo’s oldest temple and one of its most important. Alongside this temple is Asakusa Shrine where the three men are enshrined.

Although there is evidence to suggest that the festival has its origins in around the 7th century, its current form was established during the Edo period (1603-1868). Today it draws somewhere in the region of two million visitors, and is considered one of the ‘big three’ festivals of Tokyo.

The Festivities of Sanja Matsuri

The Sanja Matsuri is spread over three days on the third weekend of May, with festivities kicking off on the Friday. At around 1pm priests, geisha, musicians, dancers and the city’s officials form a parade along Yanagi dori to the temple and shrine dressed in traditional garb. Following this there is a traditional prayer and dance called Binzasara Mai for an abundant harvest for the neighborhood’s descendants, and the first of the ‘mikoshi’ portable shrines are carried through the streets.

The following day more of these portable shrines – 100 representing the 44 districts of the Asakusa neighborhood including smaller women’s mikoshi and children’s mikoshi – are brought to the shrine to be blessed and then return through the crowded streets to spread the prosperity to the area. As they are carried the shrines are jolted violently to intensify the power of the deities within.

On the final day of the festival, Sunday, representatives from the 44 districts compete within Senso-ji Temple for the right to carry the three main mikoshi, representing the three men who founded the temple over 1,300 years ago. As they do so they jostle and wrestle with each other, and this violence means that spectators are not permitted within the temple.

Eventually after two hours of competition the three mikoshi are brought out to visit every street and shopping arcade of the Asakusa neighborhood before returning to the temple.

For many centuries, Asakusa was Tokyo’s predominant entertainment district, and when still located outside the city limits it was the site of kabuki theaters and a large red light district. Today it is the centre of Tokyo’s ‘shitamachi’ (“low city”) where an atmosphere of the Tokyo’s past remains in tact.

Along Nakamise-dori Street, running along the approach to Senso-ji Temple, there are many small, old shops carrying an array of articles made from Japanese paper and other traditional goods such as folding fans. It is a quaint shopping street that attracts many visitors.

Though the entertainment district was mostly destroyed during World War Two, some of its popularity has returned thanks to tourists visiting these traditional streets, the arrival of the nearby Tokyo Skytree, and the Sendo-ji Temple.