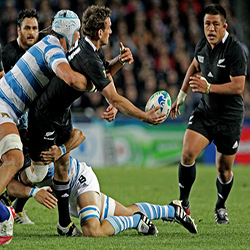 Whether you are a dyed in the wool ‘egg chaser’, or totally new to the sport, now is the time to get really interested in rugby. With origins going as far back as ancient Greece, it gained popularity and codification in Victorian era Britain, and is enjoyed all over the globe. Right now fans of the sport are enjoying the Rugby World Cup 2015, which kicked off on September 18 and ends on October 31.

Taking place in England*, the sport’s spiritual home, the World Cup is being competed between 20 teams; from the minnows of Uruguay and U.S.A. to the undisputed favourites, the All Blacks of New Zealand. One of the lower ranked teams that has already made a big impression is Japan, shocking the rugby world with a surprise victory over the Springboks of South Africa in a game that has been described by some as the most entertaining in the history of the tournament.

So, whether the Rugby World Cup in has been indelibly inked on to your diary, or you just want to get a jump on those Johnny-come-latelys in 2019, you’ll probably want to know which bars in the capital are showing it.

*Due to being held in a nation that is currently eight hours behind JST, venues may be showing games ‘as live’. Contact bars for exact details.

If you want watch a British sport, its probably best to watch it in a British Pub, particularly when this year’s hosts are second favourite to lift the Webb Ellis Trophy. Hobgoblin has three locations serving award winning craft ales, ciders and lagers and most games will be shown live with next day replays.

Pretty much wherever you turn around in Tokyo you can find a branch of one of these ubiquitous British pubs. They have plenty of screens which show sports almost any time of the day. However, baseball most definitely takes precedence, and if it is not a Japan game, don’t necessarily expect to be able to hear it.

The sign outside of this British Pub reads “Respect all football fans” and that seems to refer not only to supporters of Association Football (soccer) but also to fans of Rugby Football. Showing up to six soccer games in one day, often simultaneously, the Ebisu location of this chain is a great place to watch sports, but do confirm that any rugby games do not clash with big soccer games.

Perhaps Tokyo’s preeminent American sports bar, Legends has a plenty of screens, all of which are purposefully placed for viewing, no matter where you sit or stand. It’s a relatively small place, but that just adds to the atmosphere.

As you would expect for a sport that has a long and illustrious history, rugby has a myriad of rules and regulations. However, for the uninitiated, below are a few basic rules to get you started.