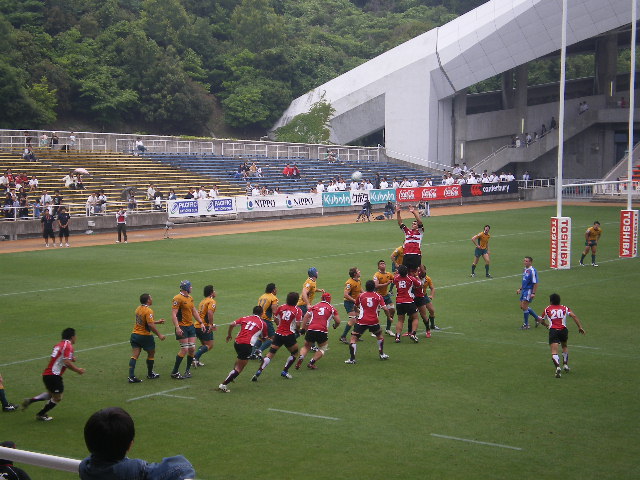 While most people around the world know the Summer Olympic Games will be here in Tokyo in 2020, we actually have a very large sporting engagement to host a year before that during early autumn 2019, just over eight months from when this will hit the interwebs.

The Rugby World Cup is the world’s third largest sports tournament behind the Summer Games and Soccer World Cup. Japan has hosted both of those other sports before, so this should be like old hat to us (we hope) and give us a chance to test out a lot of facilities that will also be playing double duty in 2020. Not to mention giving a chance for Japan’s burgeoning rugby scene to be front and center during the tourney. Yes, that’s right, Japan has some great rugby teams and storied past.

There are some 3000 officially sanctioned clubs in Nippon, and the sport has been played since the latter half of the 19th century when a team organized itself called the Yokohama Foot Ball Club. Later on due to the influence of foreign professors, Keio University along with a host of other prominent colleges started teams and began playing each other. Even the brother of the Showa Emperor, Prince Chichibu, came to love and promote the sport, becoming the president of the Japanese Rugby Football Union. Nowadays you can catch a match between any of the 16 corporate owned teams in the Top League who vie for the Lixil Cup every year. From September 20 until November 2 of 2019, twenty of the worlds best teams will challenge each other in 40 matches along with the quarters, semis, and final matches. There will be 12 different venues around the country from Hokkaido to Kyushu, with Tokyo Stadium in Chofu and Yokohama International Stadium hosting many games as well as the playoff and final matches around the Kanto Capital Region. The schedule is already posted, so do give the table a look and check out where your favorite team is playing at the venue of your choice.

Tickets for the matches can be found only in one location: https://tickets.rugbyworldcup.com/. There are no other official means to purchase tickets at the time of this writing, however, at the 2002 FIFA World Cup, there were ticket agents with permission to sell seats at the venues themselves. It isn’t known yet whether this will be the case for the Rugby World Cup as well, or not, so stay tuned.

Images: “Japan vs Australia IRB 2008” by Historian is licensed under CC BY-SA 3.0