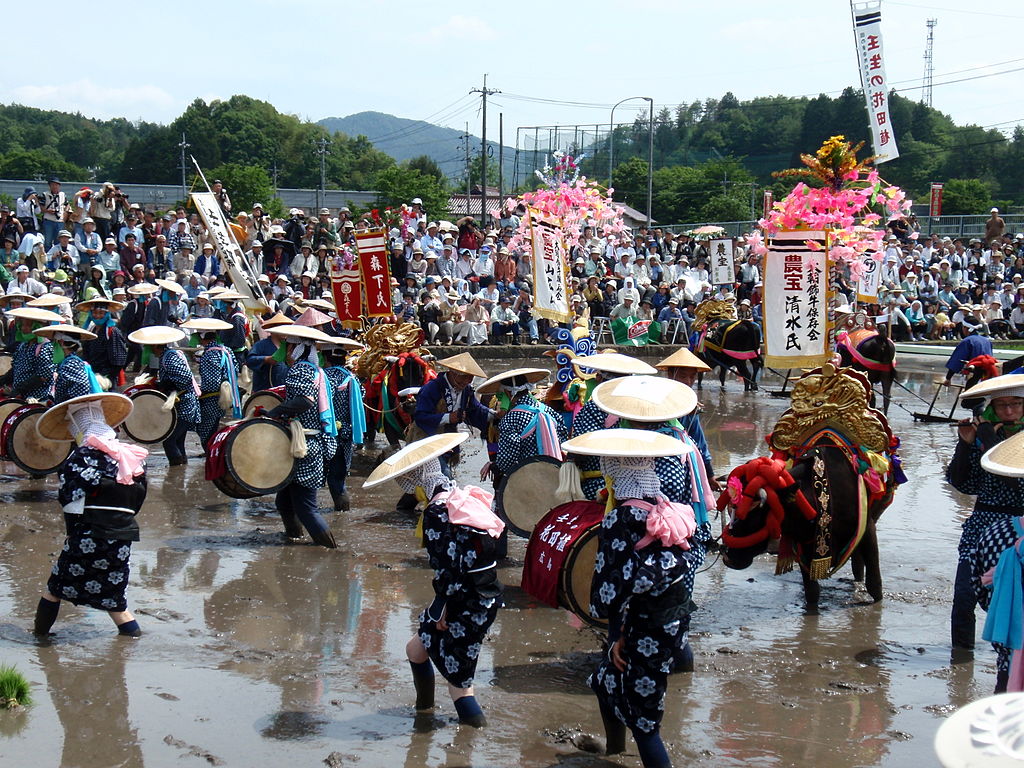 I always recommend venturing out of the city if you can. Rural Hiroshima Prefecture is a knockout, and this is a wonderful time of year. The spring foliage still shows its fresh, pale green on the hills, and the worst of the summer heat is weeks away.

Most of the towns in the Hiroshima countryside are farming communities, and as elsewhere in the world, both planting and harvest are major yearly events. In Hiroshima, you have a unique chance to see a rice planting ritual with roots in the distant past. In fact, in 2003 the Mibu no Hanadaue ritual was singled out for inclusion on the UNESCO Intangible Cultural Heritage List. And it really is a spectacle worth the trip.

The planting itself is preceded by a children’s parade, folk dancing, and a parade of the powerful and colorfully costumed bulls that are used to plow the paddies in advance of planting. The bulls themselves are a major draw, and in recent years are increasingly hard to find. But for the moment, they still form a core part of the ritual, as they’re led into the fields to draw the plows through the sod. After they’re finished, women called ‘saotome,’ the rice planting maidens, form rows and set to work. In kimono and elegant straw hats, the maidens sing along to music provided by traditional musicians on drum and flute, moving in rhythm through the mud as they fix the new seedlings in the prepared paddies. It’s unclear when exactly the ritual began, or whether the original purpose was primarily religious or simply entertainment, but it’s picturesque enough to attract crowds of spectators and photographers.

In addition, there are performances of kagura, the shrine dances that are famous in this part of Japan, as well as the chance (if you’re interested) to inspect farm equipment historically used in both rice paddy agriculture and the Hanadue ritual itself. A local saying holds that “It never rains on rice planting day,” so get out there and see the countryside before the proper rainy season sets in.

If you’re unable to make the trip, Shukkei-en garden in Hiroshima city center will offer a smaller rice planting event. The rice planting takes place in the garden’s small rice field at the rear right of the garden as you face in from the main gate. The ceremony is accompanied by traditional music and dancing, both at the rice field and on the arched stone bridge crossing the garden’s pond. There are also tea ceremonies held throughout the morning and afternoon at Shukkei-en’s Seifukan, the garden’s main teahouse.

Place: Mibu Village, Kitahiroshima-cho, Yamagata-gun.  Approximately five minutes by car (with good signage) from the Chiyoda Interchange of the Chugoku Express.  Going by bus, take either the Miyoshi-Shobara-Matsue or the Miyoshi-Shobara-Tojo bus from the downtown Hiroshima Bus Center, getting off at Chiyoda IC.

Cost: The ritual and parades are free. If you wish to see kagura performances by four local troupes, the cost is 1500 yen at the door of the cultural center.

This address takes you to a printable English-language PDF brochure including maps and further access information.

Cost: Cost for the rice planting ceremonies is included in admission on the day, 260 yen for adults, 150 yen for high school and college students, and 100 yen for children. Tea ceremonies are an additional 700 yen, and well worth it if you haven’t experienced one before.