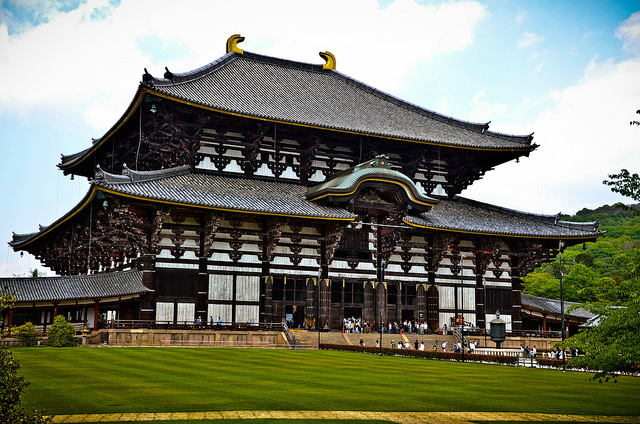 Some 1,300 years ago the Empress Genmei established the seat of power in the mountainous area of Heijō-kyō, and in doing so created the country’s first ever permanent capital. With the nation being ruled from the city (present-day Nara) this time has come to be known as the Nara period.

Today Nara is a small and compact city that, when it comes to tourist attractions, historical charm, UNESCO World Heritage Sites and cultural relevance per square mile, Nara is not unlike an amusement park of historical relics. Every where you look, every where you turn, there is another impressive temple, shrine or sprawling park, making it an excellent destination for a day trip from Nagoya.

Upon arriving at Nara station it is pretty easy to find the sights of the city: simply head north past the streets lined with restaurants and souvenir stores (perhaps stopping to watch the impressive pounding of mochi by the fastest mochi maker in Japan on the way). At the top of these streets, the sights begin. Kofukuji is most likely to be the first attraction that you come across as you head through Nara. At one time the family temple of the Fujiwara, the most powerful family during the Nara and Heian Periods, it was established in Nara at the same time as the capital in 710 it had been comprised of over 150 buildings.

Today there are just a couple of significant structures remaining, including a five story pagoda, the Eastern Golden Hall and a three story pagoda. Standing 50 meters tall, the former is Japan’s second tallest pagoda. Nara Park is perhaps what Japanese think of when they consider Nara. Though the park houses most of the city’s attraction, it is by no means the most striking park that you will ever see. That said, it is not without its charms, particularly during the spring’s cherry blossoms and the changing of the leaves during autumn, and is best known for the 1,200 wild deer that roam the area.

Considered in the Shinto religion to be messengers of the gods, Nara’s deer have become a symbol of the city and have even been designated as a natural treasure. Nara’s deer are surprisingly tame, with some deer having learned to bow to visitors to ask to be fed, although they can be aggressive so taking care is advised. The other symbol of the city is the temple of Todaiji (main photo). Built in 752 as the head temple of Japanese Buddhism, modeled on palaces of China, it is an immense structure (although it is currently just two thirds of its original size) that held such power in the country that the capital was moved from Nara to Nagaoka in 784 to limit the temple’s influence on governmental affairs.

Inside the huge central building, is the Daibutsu (great Buddha) which at 15m tall is world’s largest bronze statue of the Buddha Vairocana. It is quite a striking sight. Like Kofukuji, Kasuga Taisha was part of the Fujawara clan’s complex of religious structures, and today it is considered Nara’s most celebrated shrine. It is perhaps best known for its lanterns, with many stone lanterns lining the pathways to the shrine, and hundreds of bronze lanterns hanging from the buildings.

Unfortunately they are lit only twice a year at Lantern Festivals in early February and mid-August. However the shrine is open all year round, and the structures themselves, nestled away amongst the trees, slightly corroded in places, have a real rustic, spiritual charm. After seeing the temples and shrines of Nara, it is well worth a visit to Naramachi (literally Nara town) as you return to the station. As you might expect of what was once a capital city, Nara was at one time a bustling commercial town. From the 15th century the streets were lined with ‘machiya’, buildings that served as both the shop fronts and homes of merchants plying their wares from outside of these narrow structures (built this way as they were taxed on street access rather than structure size). Some of these buildings remain and are open to the public.

Another fascinating aspect of Naramachi is Gangoji Temple, at one point one of  Japan’s most important temples. Registered as a Unesco World Heritage Site, today only a couple of temple buildings remain of the once expansive complex.

While these are just a few of the more popular sites in Nara, there are plenty more shrines, temples, parks and restaurants to explore in this ancient city. Being so compact, and just 90 minutes from Nagoya, it makes for an excellent day trip in which you can pack in more sightseeing than you would in pretty much any other city in the country.

Getting to Nara From Nagoya

By train: Getting to Nara from Nagoya by train couldn’t be easier. Take the Shinkansen bullet train to Kyoto where you can change to the Nara line.

By car: Driving to Nara takes a little longer than the train, at around two and a half hours. Take the Tomei-Osaka Expressway, Osaka National Highway and National Route 25. From there its Route 187 and Prefectural Route 188. (Google map to Nara Station here)

By bus: There are five Meitetsu buses between Nagoya and Nara each day. It takes about two and a half hours and costs 4,100 JPY for a round trip. Website here.