Nagano Ebisuko Fireworks Festival, Where It’s All Going off This Autumn Nagano Ebisuko Fireworks Festival, Where It’s All Going off This Autumn

For most of Japan, the coming of autumn marks an end to the almost nightly banging, crashing and gunpowder-scented air of the fireworks festivals. Yes, there may be a few straggling events at the beginning of September, but that is pretty much it. But then, in late November, when the air is finally starting to chill and winter begins its icy approach, there is one outlier of a festival; one of the best.

About the Nagano Ebisuko Fireworks Festival

Every year on November 23, some 430,000 spectators from all over Japan converge on the Saigawa riverbanks in Nagano City to watch what is described as one of the best such autumn festivals in the country. Unlike many fireworks festivals, which are simply for the viewing enjoyment of the local community, this event is a fireworks competition, with different factions – often sponsored by local companies -competing to put on the best and brightest performances.

As a rule, the competitors fall into two camps: shock, utilizing huge explosions with a seeming intention to break the heavens by sending cacophonies of sound ricocheting into the sky and back down to earth and shuddering into the chests of the enthralled crowds, and awe, with glorious patterns of physics-defying ostentation dancing across the darkness in a Technicolor frenzy.

Some of these displays are put to musical interludes, with Disney, Wagner (fittingly) and Abba (not so fittingly) represented among others. The performances grow in magnificence until, finally, two spell-binding hours later, the last display fills the sky in a superlative fanfare of pyrotechnics of the like that would be recognized by Arthur Dent and Zaphod Beeblebrox at The Restaurant at the End of the Universe. 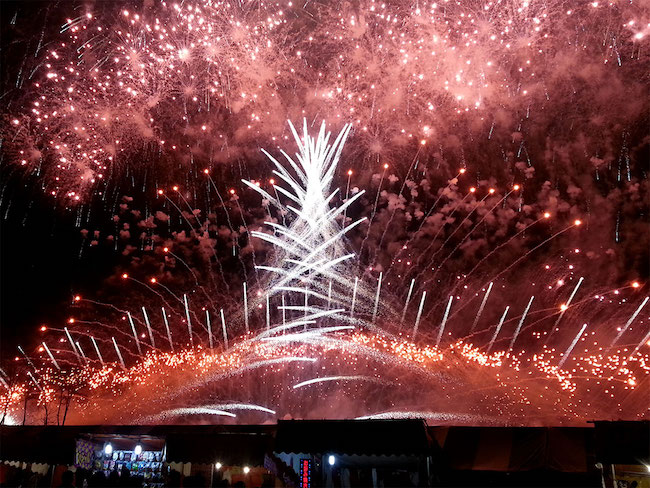 The festival has been going off, literally, since the Edo period, and is held in conjunction with the Ebisuko religious festival at Nishinomiya Shrine. Historically the festival was intended for locals to come and pray for a prosperous business, a good harvest, and good fortune, and local businesses used to hold bargain sales for farmers to shop for the coming winter months. In 1899, a group of local volunteers decided to have a fireworks display from morning to midnight to express their appreciation to Ebisu, one of Japan’s seven gods of fortune, and it has been a staple of the festival and a proud tradition ever since.

Getting to the Nagano Ebisuko Fireworks Festival

Getting to the Saigawa-ryokuchi Koen park in Nagano is easy. It’s about a thirty-minute walk from Nagano station (served by the JR East, Nagaden and Shinano Railway lines), just follow the hordes out of the east exit.

If you don’t feel like walking there are plenty of shuttle buses to and fro, though these can get pretty packed. The event is held on November 23rd annually and it kicks off between 6-8pm, though you should arrive early to get a good spot from where to watch the action.

Don’t forget, it is Nagano in November, so wrapping up warm is very much advisable!