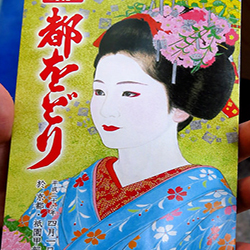 The geisha is perhaps one of the most recognizable symbols of Japan, an icon that conjures up images of beauty, grace and a time of pre-industrial Japanese tradition. Perhaps the most famous geisha are the geiko of Kyoto (geisha translates as “person of the arts”, yet the geisha of Kyoto prefer the name geiko, “arts child”). Centralized within the geisha districts, most famously Gion, they perform for small groups of guests in ancient teahouses. Unfortunately most of us are unlikely to bear witness to these demonstrations of grace and cultivated beauty as, not only is a performance understandably expensive, admission is reliant on an introduction from an existing client. Perhaps the only way we are likely to see this ancient art on display is the geiko dances of Miyako Odori.

A history of the Miyako Odori While the seat Japanese power had shifted from Osaka to Edo (modern day Tokyo) following the rise of the Tokugawa Shogunate, the country’s official capital had remained the Imperial City, Kyoto. However, in 1869 this all changed following the Meiji Restoration with capital city status being transferred to Tokyo. As you could imagine, not only did this loss of stature rankle with Kyoto’s inhabitants, it caused something of a decline in the city’s revenue. To halt this slide and to showcase the art, culture and industry of the “ancient capital” the city established the Kyoto Exhibition in 1872. One of the most popular exhibitions proved to a the geiko performance (then affectionately referred to as the “Gion Kobu Dance”) in a grand, classically beautiful house named “Matsunoya” located in Gion. This dance was the forerunner of what is today known as Miyako Odori.

What is Miyako Odori?

Though often called The Cherry Blossom Dances in English, due to them taking place when Kyoto’s sakura are in bloom, Miyako Odori literally translates to Capital City Dances in English, reflecting the hope of late 19th century Kyotoans that their status would return. The dances themselves portray traditional Japanese scenes and are tightly choreographed. To ensure perfection the dances are slow in their elegance and refinement, meaning mistakes cannot be disguised by speed of movement. The geiko and maiko (the apprentices who start as young as 15, becoming fully fledged geiko around the age of 20) perform eight scenes that follow the seasons of the year, and are exquisitely made-up, clad in sumptuous costumes with the kimonos running to millions of yen.

The showcase in 1872 was the first time that the nationally renowned and famously conservative geiko of Gion Kobu had performed in public, which naturally caused quite a stir. Due to this triumph the dances were repeated the following year and held in the more spacious Gion Kobu Kaburenjo Theatre where they continue to be held to this day.

This year sees the 143rd presentation of the Miyako Odori, and tickets to the show are available now. Every day from April 1 to 31 the geiko and maiko of Gion Kobu will perform their exquisite dances, songs and short dramas four times a day, backed by a traditional Japanese orchestra. There are three sets of tickets available: second class bench seating on the third floor; first class seating; or a special class ticket that includes the best seats in the house. The special ticket also includes an opportunity to see a tea ceremony performance prior to the dances, a Japanese dango sweet, and a Miyako Odori dish to take home. The tea ceremony can be a little crowded, but considering the unlikelihood of being granted access to the famous teahouses of Gion, it is highly recommended.

Getting to Miyako Odori 2018