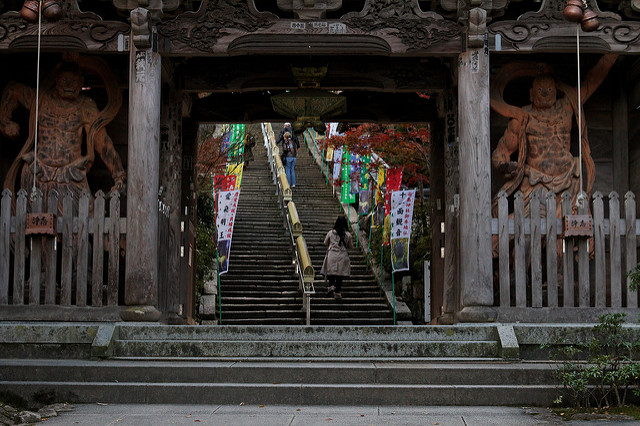 January is a wonderful month to make a trip to Miyajima. Whether you’re heading out early in the month for the year’s first ‘hatsumoude’ visit to the island’s World Heritage Itsukushima Shrine, or stopping by mid-month for the shrine’s Tondo festival, make sure not to miss out on another of Miyajima’s best spots.

Daisho-in belongs to Japan’s Shingon school of Buddhism, an esoteric sect sharing certain core features with the Buddhism of Tibet. According to tradition, the temple was founded in 806 by a famous wandering monk named Kukai, often referred to by his posthumous name Kobo-Daishi. After a 100-day ritual atop the island’s central peak of Mt. Misen, he established the temple and continued on his journeys.

For centuries, the monks of Daisho-in were responsible for many of Miyajima’s most iconic festivals, including the New Year’s festival of Chinkasai. After the Meiji Restoration of 1868, returning full control of the Japanese state to the Emperor, Buddhism and Shinto were forcibly separated and Daisho-in’s relationship to Itsukushima Shrine was forever altered.

In 2006 Daisho-in celebrated its 1200th year since foundation, with a visit from the Dalai Lama and attendant monks, who gifted the temple with a beautiful sand mandala that can be seen in the ‘Kannon-do” hall.

Daishoin is often overlooked by travelers simply because it’s somewhat out of the way. In fact, the temple’s buildings are visible from the ferry on the approach from the mainland, and it’s only a little further on than the Shrine itself, but after winding their way through the shopping arcade and visiting Itsukushima, many people turn around and start back toward the Thousand Mat Hall or the ferry terminal.

Make the effort to head up the hill, though, and you’ll find yourself amply rewarded. First, just past the grim guardian statues flanking the temple’s Niomon Gate, you have a choice to head straight up the stairs, turning prayer wheels as you climb, or turn left to wind your way up along a path lined with statues of the Buddha’s disciples. Daisho-in’s head priest has included some whimsical statues to appeal to children, so if you’re visiting with little ones they may prefer this second route. Before you enter the upper gate, though, don’t forget to stop at the temple’s belfry. Unlike at some other temples, visitors are welcome to swing the wooden striker and sound the bell.

Entering the main precincts, you’ll find an information desk and souvenir shop on your left. Admission to Daisho-in is free. Best to stop here and pick up an English language map of the temple, if you didn’t already find one back at the terminal. If you’re collecting ‘goshuin’ stamps to commemorate your trips to various shrines and temples, this is the place.

There is a lot to see and explore here, so take your time and be sure to poke around any place that isn’t clearly off-limits. Some highlights include the ‘tainaimeguri’ dark walk beneath the Kannon-do, which is a fun way to begin your tour of the temple and also confers a ritual rebirth, if you’re in need of spiritual rejuvenation. Inside that building, you’ll find the aforementioned sand mandala as well as the statue of the Eleven-faced Kannon, probably made in Nara around the year 700. Out front, a statue of the Archangel Michael marks Miyajima’s sister-city relationship with France’s Mont Saint Michel.

Elsewhere around Daishoin, must-sees include the image of Namikiri Fudo-myoo, implacable foe of ignorance and evil, and the thousand smaller images of him ranged along the walls of the Chokugan-do hall. In the Maniden Hall, you can make your greetings to the Three Awesome Deities of Misen, worshiped here from time immemorial.  Continuing deeper into Daisho-in’s grounds, the statue of Kukai in the Daishi-do Hall is said to grant one wish made sincerely, while a slow stroll through the dim recesses of the Henjokutsu cave will confer all the benefits of the famed 88-Temple pilgrimage route around Shikoku.

There’s more to find, and every traveler will leave with his or her own favorite encounters and impressions. So leave time on your next trip to Miyajima for a walk up the hill to this wonderful temple. Happy travels!