Kobe Matsuri: Where East Meets West for a Weekend in May 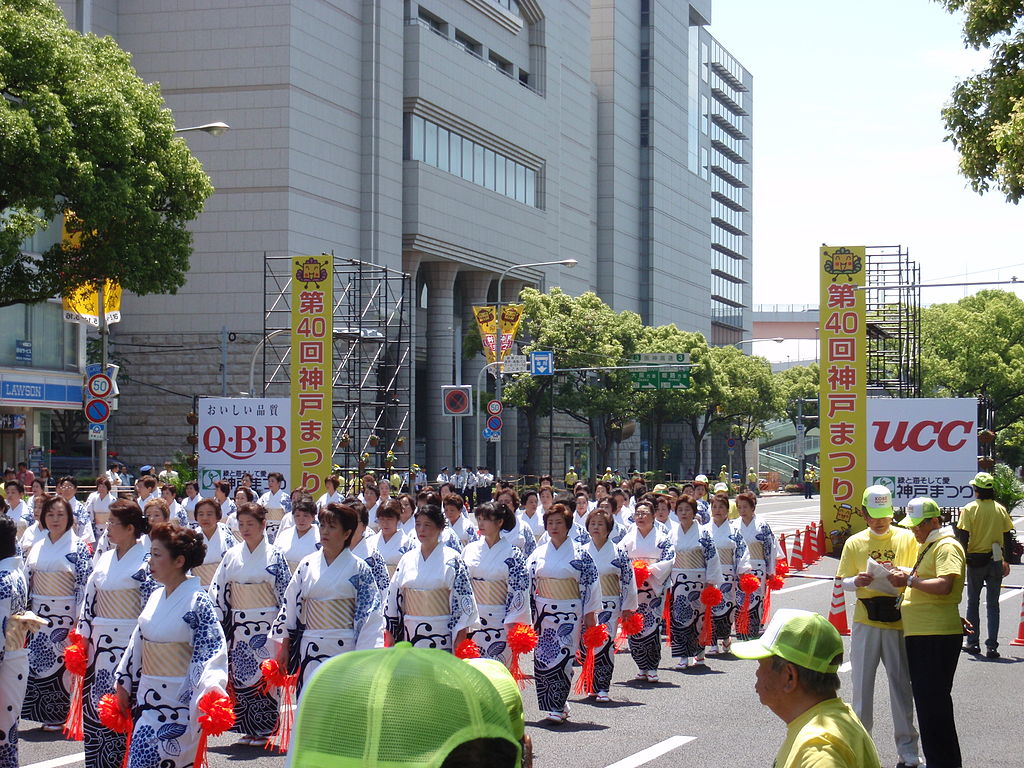 Kobe Matsuri: Where East Meets West for a Weekend in May

The annual Kobe Festival (Matsuri) is unlike any celebration you are likely to run into in the Kansai region during the year. There are plenty of colorful street festivals in Japan and most are tied to an ancient shrine. The Kobe Matsuri is tethered to the past as well, but it is mostly to the worship of commerce, especially with the West. Rather than reaching back centuries, however, this festival draws its inspiration from the Treaty of Amity and Commerce that led to the opening of the Port of Kobe in 1858.

The celebration had antecedents during the Great Depression of the 1930s. Civic leaders wanted to find a way to take the peoples’ minds off their economic misfortune and decided to throw a party. They used the Rose Festival in Portland, Oregon as their model with abundant floats and overflowing flowers.

In 1967, the Kobe Chamber of Commerce staged a centennial celebration with business overtones that featured gayly dressed street dancers. Four years later when the first official Kobe Matsuri was launched, the 70 parade participants drew widely from these prior celebrations. One popular element the Matsuri borrowed from American parades was the crowning of a festival Queen. As it spotlighted the individual rather than the collective that is the Japanese norm, the Kobe Masturi became informally tagged as the “Citizens Festival.”

This is Kobe’s biggest party of the year. On the third weekend in May, the entire city is engulfed in the festivities. You will be able to find a celebration in each of Kobe’s nine wards. After sampling the parochial dancing and feasts on Saturday, the focus on Sunday is the grand float parade (danjiri) that spills down Flower Road in the Sannomiya-Motomachi area beginning at 11:00 a.m.

There will be no mistaking this parade for an affair honoring Japanese traditions. Right at the front of the procession will be the Disney bus with Mickey Mouse and his fellow animated characters on leave from Tokyo Disneyland. You will likely see homages paid to American blockbuster movie franchises in the procession. While the Japanese Navy will be in attendance, the naval band may be heard offering its rendition of “Anchors Aweigh,” the march of the United States Navy.

The unofficial dance of the Kobe Matsuri is an import as well. Many of the more than 1,300 dancers will be sashaying to the rhythms of the national folk dance of Brazil – the samba de roda. The samba elbowed its way onto the street with the sponsorship of a local Brazilian eatery. Now the Copa Samba Team is a highly anticipated part of the festival and many parade participants don the colorful South American costumes and parade-goers take samba lessons.

All of the entertainment is free to view. After a weekend of dancing and eating local Kobe street food, the Kobe Matsuri concludes with a fireworks demonstration over – where else – the Port of Kobe.