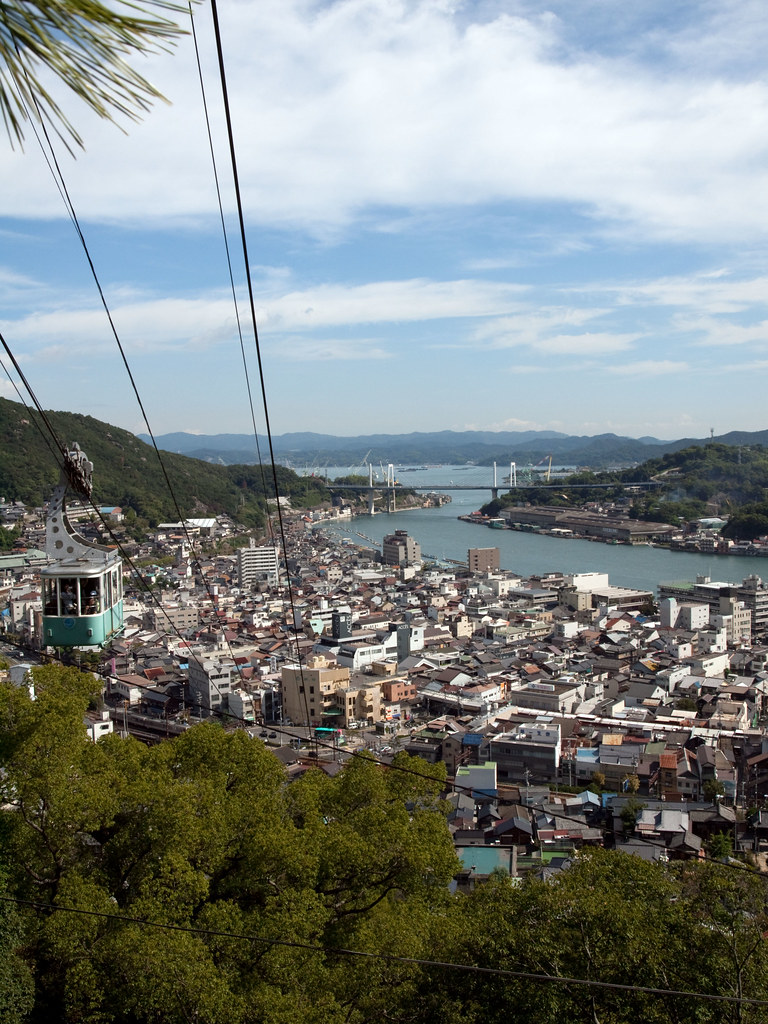 Most residents of Hiroshima have at least heard of Onomichi, if not had the opportunity to visit. Onomichi is a small shipbuilding town nestled on the edge of the Seto Inland Sea, aka Seto Naikai, to the East of Hiroshima. Among Japanese people of a certain vintage, it is probably best remembered as the location for the 1950s feature film “Tokyo Story.” But these days Onomichi attracts a small but growing number of artists,  big-city escapees, to walk the city’s quirky coffee shops, refurbished warehouses, renovated residences, and even local crafts and /industries.Onomichi’s Shin Onomichi Station can be reached directly by the regular JR Sanyo Line, or on the Kodama bullet train in 48 minutes. From there, you can take a bus into town.

Onomichi is well known for its ramen, and more recently also as the “trailhead” for the Shimanami bicycle course, a route that island-hops the channel between the main island and Shikoku., but there are other options for a visit to Onomichi, such as a cruise to Tomonoura, 20 km farther east on the Inland Sea coast.  Some recommendations to note: 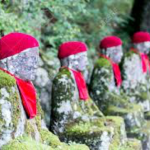 The Onomich Temple Walk can take anywhere from a few hours to a full day, but regardless of the time spent it is a lovely experience. 25 temples appear in the roughly 2.5-km-long Temple Walk, which snakes its way through the mountainside. If taking a short trip, I would recommend visiting Senko-Ji, which is the most visited and famous stop on the path, and it is hard to miss! Located in Senko-Ji Park at the top of Mt. Senko-Ji, the temple is accessible via ropeway or bus, and the area also includes the Onomichi City Museum of Art and the Path of Literature (Bungaku no Michi). Senko-Ji is famous for the many smiling Jizo figurines dotting the area.

Tennin-Ji temple is another must. Located further down Mt. Senko-Ji, Tennin-Ji is comprised of the main temple and a 3- tiered pagoda registered as an Important Cultural Property by the Japanese government. Within the temple’s Rakan Hall sit 500 statues of the rakan (in Buddhism, a rakan is a saint or person who has attained nirvana). From there you can take an hour-long cruise that snakes its way past some impressive sights and scenery.

Tomonoura is a small but picturesque port town at the southern end of Fukuyama City, to the far east side of Hiroshima Prefecture. It features an endearing old-fashioned fishing townscape, with a calm and laid-back atmosphere. Tomonoura is part of the Seto Naikai National Park. It was a bustling merchant port during the feudal era and particularly well-known for “homeishu,” a medicinal liquor whose long history dates to 1659.

Merchant ships traveling along the Seto Inland Sea would dock at Tomonoura’s port while waiting for a favorable tide, and the town center flourished with the bustling sea activity, leading to thriving industries such as the production of the previously mentioned homeishu, a variety of sake valued as an elixir of long life and remarkable healing qualities.

In the modern age, Tomonoura is a popular filming location for international and local movies – “The Wolverine” and “Ponyo on the Cliff” by Studio Ghibli were filmed here, for example. The port portrayed at the beginning of “Ponyo on the Cliff” was modeled after Tomonoura. There are other sightseeing opportunities, besides Ponyo!

The eleven-meter tall Joyato Stone Lighthouse is a remnant from the Edo Period (1603-1867) and a symbol of Tomonoura. It stands prominently at the waterfront directly south of the town center.

The spacious Ota Residence belonged to a family who started brewing homeishu in the late 17th century and continues to this day.

A couple of museums – one the Irohamaru Museum is dedicated to the memory of a ship that sank off the coast and the History and Folklore Museum have interesting displays but be aware but they have little explanations in English.

This is a great excursion though perhaps best to overnight in Onomichi before the cruise and take it all in at once.