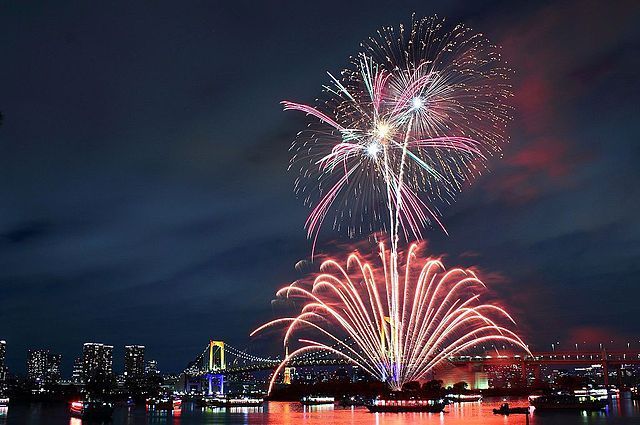 Fireworks and summer festivals are arguably the best part of summertime in Japan, with days spent wearing yukata and jinbei traditional clothing while munching street food and nights spent outside watching literally hours of explosions and enjoying the atmosphere of the festival, and the crowds.  Summer festivals are a rare chance for people to relax and unwind, but here in Tokyo as always, are usually jam-packed with throngs of families looking for some mid-summer’s enjoyment as well.

One of the oldest fireworks festivals in Japan, the Sumida River Hanabi goes back to the 18th Century. It is held on the last Saturday in July along the Sumida River, which flows through eastern Tokyo into Tokyo Bay.  The show can be watched from many points around the Asakusa/Sky Tree area (including on live TV!) but be aware the neighborhoods are dense and buildings will block your view of the sky in all but the best areas. Also note that the areas get REALLY crowded with the increased amount of tourists, and the police have started moving crowds across the bridges and side streets in timed groupings.

Like other festivals on this list, the Edogawa Fireworks Festival is a long held Tokyo tradition. 2019 will be the 44th annual festival, and it will feature a lineup of about 14,000 fireworks.

On the same exact day as the Edogawa festival, both Itabashi Ward and Toda City will have theirs on the banks of the Arakawa. The joint event will feature 12,000 fireworks going off from both sides of the river.

Jingu Gaien Hanabi is notable for a number of things, but its central location and visibility from a number of neighborhoods is probably the most relevant here.

Taking place in the Futako-Tamagawa area located just southwest of Shibuya in Setagaya-ku at the Tama River border with Kawasaki, Kanagawa. Dominated by a large collection of shopping plazas including the new Tokyu Rise mall and office complex, the riverside location also offers a long recreational space on both banks. This also means the fireworks can be seen from many different vantage points. Also note, the date has moved up 2 months from August to October now, probably due to the huge thunderstorms that totally canceled the 2017 edition.

You could also try and secure a spot to view the fireworks from the water via tour boat.

Photo by Kakidai (Own work) [CC BY-SA 4.0], via Wikimedia Commons