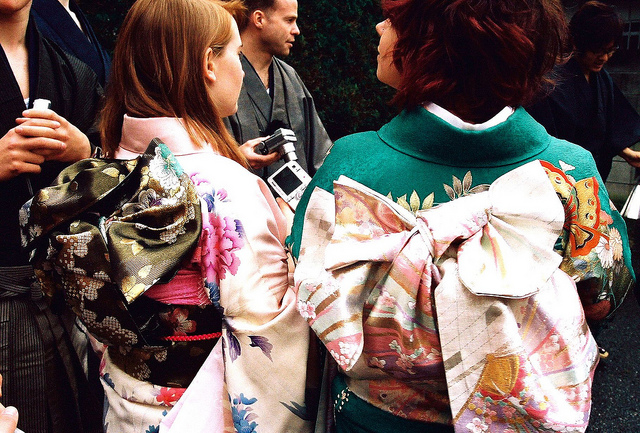 Whether you love it or loathe it, Christmas shopping time is pretty much here. Personally, I’m in the latter camp. As the eldest of 13 cousins (and now countless cousins-once-removed) Christmas shopping becomes a Herculean task, as coming up with ideas for presents becomes increasingly difficult.

Thankfully, being here in Japan we have a wide range of fresh, different and (on occasion) crazy things that we can give to people. What do you get for the person who’s got everything? Something from Japan, because I bet they’ve not got it. Here are a few ideas that may spark your imagination.

An obvious choice, but a good one. For Christmases past I have bought kimonos for both my mother and my sister, and it certainly gives that ‘wow’ factor when it comes to opening time on Christmas morning. And perhaps the best thing about giving a kimono as a gift is that it looks pretty expensive, but can often be picked up quite cheaply at second hand stores. The only issue is that, after the initial amazement of the present, there aren’t many opportunities to wear a kimono back at home. That said, my mother wears hers as a dressing gown around the house after taking up the hem (kimono can be quite long when you aren’t using the obi belt with it), and my sister has taken to regularly getting takeaway sushi from a nearby Japanese restaurant and wearing it when she invites friends round for a few drinks. If you want something more practical, a jinbei makes excellent home wear.

Rice wine, known as ‘nihonshu’ in Japan or ‘sake‘ around the world, is the perfect gift for that family member you don’t know all that well. I usually get a bottle of the stuff for my brother-in-law and as there is such a wide variety (and it can be pretty cheap) there is a near endless supply of choices. If you want to make it a little bit more personal, why not include a ‘tokkuri’ and ‘ochoko’ bottle and cup set? Of course, sake can be something of an acquired taste, and not always appreciated (according to an uncle of mine who was less than impressed with his present last year). As such, whiskey makes a great substitute. Japan produces some fantastic whiskeys, with the Yamazaki Single Malt Sherry Cask 2013 being described by Whisky expert Jim Murray as a drink of “near incredible genius,” awarding it 97.5 marks out of 100 in the 2015 World Whisky Bible. This year one of the most popular brands, Hibiki 17,  has been almost impossible to get abroad since it was named as the best in the world creating a domestic rush on the single malt. You may have to smuggle this one out of the country…

So far, so pricey. But things don’t necessarily have to get too expensive, as Japanese handicrafts and goods can be bought pretty cheaply. Chopsticks are a good start and can be found pretty much anywhere – from supermarkets to 100 Yen stores, to specialist shops. Some places will even engrave names of them, which is a nice touch. Otherwise ornate-looking fans and small accessories such as purses made from kimono material and wooden ‘geta‘ sandals all make for nice gifts. On more than one occasion I have bought tenugui towels that can be fashioned into handbags and wall hangings, and they generally garner repeat requests. If you are artistic, you could copy an idea that a friend of mine had, which was to have a Japanese speaker work out a family name in Japanese, and wrote it in kanji along with all the names of the family in katakana using a Japanese calligraphy brush and had it framed.

Another gift idea that isn’t going to break the bank is Japanese snacks and drinks, and thanks to their (often) unusualness, they will be a strong talking point around the Christmas tree. The most obvious here would be matcha, or green tea. Although it isn’t necessarily to everyone’s taste, it looks great as a gift, particularly if you pair it with a teacup or even a tea-making set. If you are near a popular tourist spot (or even a largish train station), there will be a number of ‘omiyage‘ gift boxes that you can use as presents – with manju steamed buns, red bean paste cakes or senbei rice crackers all ideal for the purpose. Failing that, the convenience store has a whole load of choices, such as chocolate Pocky sticks, Pretz pretzel sticks, bamboo shaped Takeno no Sato biscuits, green tea-flavored Kit Kat, or even cup ramen. For the more adventurous members of your family, why not try them on some saki ika squid jerky?

Something I’ve always struggled with is getting presents for kids, namely as there just aren’t that many toyshops around (though if you are in Nagoya you can find a few here, and for those in of you in Tokyo there are some here).

But if you do find somewhere to shop, or just head over to Amazon/Rakuten, you will find that there are loads and loads of great characters, dolls and figures. At the risk of reinforcing gender stereotypes, some of the most popular toys for girls come from the Purikyua (also known as Glitter Force) range, while a lot of young boys are into Yokai Watch. For smaller kids you can’t go wrong with Doraemon and Anpanman, and last year I bought my three-year-old nephew an electronic Anpanman book (in the video above) with which he can learn both English and Japanese words, and he loves it!