Yōkai, the Weird World of Japanese Spooks and Spectres 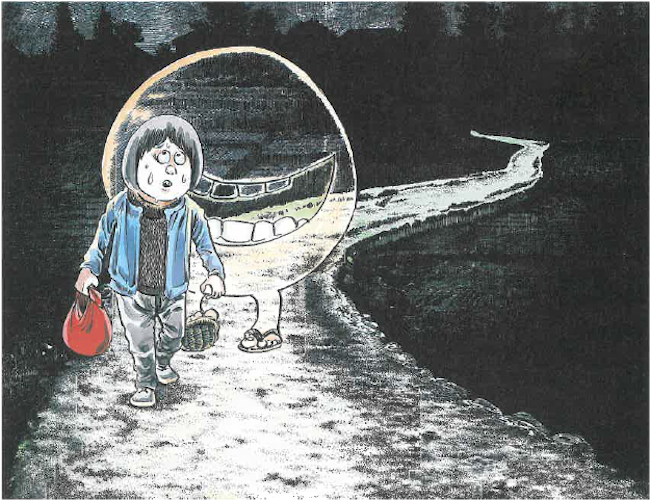 Yōkai, the Weird World of Japanese Spooks and Spectres

Halloween is all about spooky stuff, right? There are various bone-chilling tales coming out of medieval Europe for its origins – the dead returning, devils punishing Irishmen, ghosts, spooks, and witches.

But the west isn’t the only place with these traditions. Japan too has plenty of things that go bump in the night. ‘Yōkai’, a motley crew of phantoms, specters and supernatural beings, are spoken of in folklore from all over the country. The word yōkai is made up of the kanji for “bewitching; attractive; calamity;” and “spectre; apparition; mystery; suspicious”. Some are malevolent, some are naughty, some bring good luck, and some are just downright weird. Here are a few that you wouldn’t like to bump into in a dark alley at night. One of the worst things that can happen when swimming in the late summer sea in Japan is coming face to face with a jellyfish. The absolute worst is coming face to face with Ushi-oni. Literally ‘cow demon’, the ushi-oni can take many forms depending on where in the country you are, but off the coast of Shimane Prefecture and other places in Western Japan it is a terrifying sea-creature with a spider- or crab-like body and the head of a cow that attacks fishermen. It is sometimes accompanied by ‘nure-onna’, a demon who appears before an ushi-oni attack and tricks the fisherman into holding her child, which then becomes stuck to the person’s hands and grows heavier in order to hinder escape. Worse than sunburn, being stung by a jellyfish, and getting sand in your kakigori combined.

If you thought that living in the Japanese countryside seemed an idyllic way of life, think again. Gashadokuro, immense skeletal beings who wander rural areas in the darkest hours of the night, are formed from the bodies of slain warriors or victims of famine who, having not been afforded proper funerary rites, rise up to wreak their revenge on a cruel world.  As skeletons are wont to do, their bones rattle with a “gachi gachi” sound, from where it gets its name. If they should happen upon a human out late on the roads, the gashadokuro will silently creep up and catch their victims, crushing them in their hands or biting off their head. I won’t be leaving my apartment in central Nagoya any time soon. When I was a kid my gran once told me to keep away from the edge of the river near her house “unless you want your backside slapped”. There are other reasons to be fearful of the water’s edge in Japan. Kappa are extremely popular in Japanese culture and are often depicted as being quite cute, but these amphibious creatures, with webbed fingers, red eyes and skin reeking of rotten fish, are known to pull people into the water where they drown them and drink their blood, eat their liver or remove their ‘shirodama’, the soul-containing mythical bowl that foind within the anus. As stinging as my gran’s spanks were, they weren’t as bad as all that. Have you ever had the feeling you’re being followed but there’s no one around? It’s a good chance that you have come across Betobeto-san. Betobeto-san, or Mr Clacking Sandal (sounds spookier in Japanese, doesn’t it) is a specter of no discernible form, only recognizable by the sound of its wooden ‘geta’ sandles clacking on the road, beto beto beto beto… Betobeto-san is a benign spirit, though he is particularly unnerving for the unaccompanied travelers he follows down darkened, deserted pathways, synchronizing his footsteps with the walker, growing ever-closer with each step, following them wherever they go. Should you find Betobeto-san on your tail, simply step aside and say “after you Betobeto-san,” and he will pass by. Obviously he is a yōkai who believes in good manners. Shiri-me, like Betobeto-san is another yōkai that is more mischevious than it is malign, but if weirdness was up there with danger, the Shiri-me would give Gashadokuro a run for its money. For all intents and purposes, Shiri-me looks like a regular kimono-clad guy. You may not think anything of it as he calls out to you, asking if you have a moment to spare. If it is a dark evening, you probably wouldn’t even notice that his face is entirely featureless. However, you are likely to be a bit surprised as he hirriedly removes his clothes, bends over and pulls his buttocks apart to reveal a giant eye instead of an anus. As his name is literally Butt-eye, it probably shouldn’t come as a surprise. But I bet it would. Actually he’s not a bad guy, just a bit of a prankster getting off on shocking and sickening people. A bit like Jackass. But without the Jack.