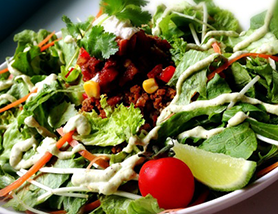 As you are no doubt well aware, Japanese food rates among the best in the world. However, if you are vegetarian, you may struggle to find your needs catered to. Many vegetarians have found themselves offered the ‘vegetarian; option’ in a restaurant only to find that it contains seafood or fish. Even the fried egg rolls are usually made using the nearly inescapable ‘dashi’, a broth made of dried bonito fish flakes!

But being a vegetarian in Tokyo does not necessarily condemn you to nights cooking at home. There are plenty of vegetarian restaurants out there, and this month there is also the Tokyo Veggie Food Festa in Yoyogi Park.

Held in front of NHK Hall in Yoyogi Park, the Tokyo Veggie Food Festa is the largest vegetarian gathering in Japan. Running from Saturday the 29th to Sunday the 30th of October it features approximately 100 food stalls offering a vide variety of vegetarian and vegan foods from all over the country.

In addition to the great food, there will also be performances from local musicians, comedy and entertainment. Whether you are vegetarian, veggie curious, or just fancy something a little heathy to eat over the weekend, it should be a fun day out for the whole family

If you can’t make it out to the festival there are still loads of other great vegetarian restaurants in the city. Here are just a handful of them.

Claiming to be the “first upscale restaurant in Japan specializing in plant-based cuisine” Tudore Tranquility in one of the most upmarket communities in the city is as high end as it gets. The winner of the Luxury Travel Guide’s ‘restaurant of the year for Japan, 2016’ provides beautifully presented prix-fixe lunch and dinner menus for a unique exploration into vegetarian cuisine.

Meaty food for non-meat lovers, this vegetarian cafe stocks the lot, from their popular ‘Yogi Burger’, a soya sausage topped vegetarian pizza, some excellent ‘chicken’ nuggets (made from soya beans), various drinks (including a latte coffee made with soya milk) and a range of vegan desserts. “Amazing food that brings bliss and health.”

Kushi Garden is one of the oldest vegetarian restaurants in Tokyo, using only organic vegetables and grains to make healthy, delicious meals. They focus on seasonal foods with an eye on macrobiotics, and as it’s close to the National Museum of Modern Art and the Imperial Palace, it makes a perfect stop during a day of sightseeing.

Serving 100-percent vegan raw food with all ingredients either completely raw or prepared at temperatures under 48 degrees, all at reasonable prices, Rainbow is something of a find. Rather than using ingredients that are expensive or difficult to obtain they use everyday ingredients and aspire for likable, “home cooked taste” and “affordable” raw food. They also promote periodic fasting, something that is unusual for a company whose lifeblood is selling food…

Perhaps you have a sweet tooth, well get yourself over to Ain Soph Journey. Offering plant based cuisine flavoured by moroccan spices and herbs, the thing to look out for is their ever so fluffy pancake set served with vegan cheese, jam, cream, ice cream, nuts and fruit, accompanied by a hearty salad and a thick soup.

Want to get your needs across to local restauranteurs? These handy phrases should help you get by.