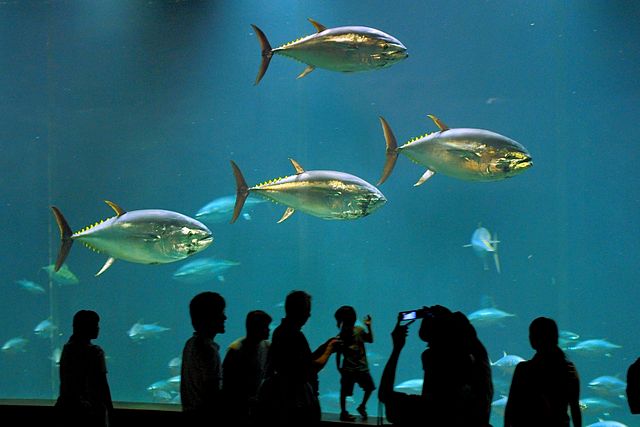 Tokyo Sea Life Park  is an aquarium featuring over 600 species of rare marine life from around the world.  The distinctive dome rising over the attraction houses a number of interesting collections, including the most famous, a 2,200-ton tank shaped like a doughnut where you can watch bluefin tuna and other fish swim.

Another well known attraction are the penguins, which became famous in an incident in 2012 in which one of their exhibit’s Humboldt penguins pulled a Houdini; scaling a 13 foot high wall and successfully overcoming a barbed-wire fence to escape into Tokyo Bay.  The penguin managed to survive and thrive, and elude its captors, for 82 days until it was finally apprehended and returned to its enclosure.  The penguin in question is rumored to have gone on to become a noted SERE School instructor, but officials have refused to comment on that.

Three times a year, the park offers free entry to residents of Tokyo.  First on May 4 in celebration of Greenery Day and again in October on October 1 for Tokyo Citizens’ Day, and again on October 10 for the anniversary of the aquarium’s opening.  Crowds can be assumed on those days, but maybe that is part of the fun?!

Photo by tomohisa suna from tokyo, japan (葛西臨海水族園のマグロ) [CC BY 2.0 ], via Wikimedia Commons