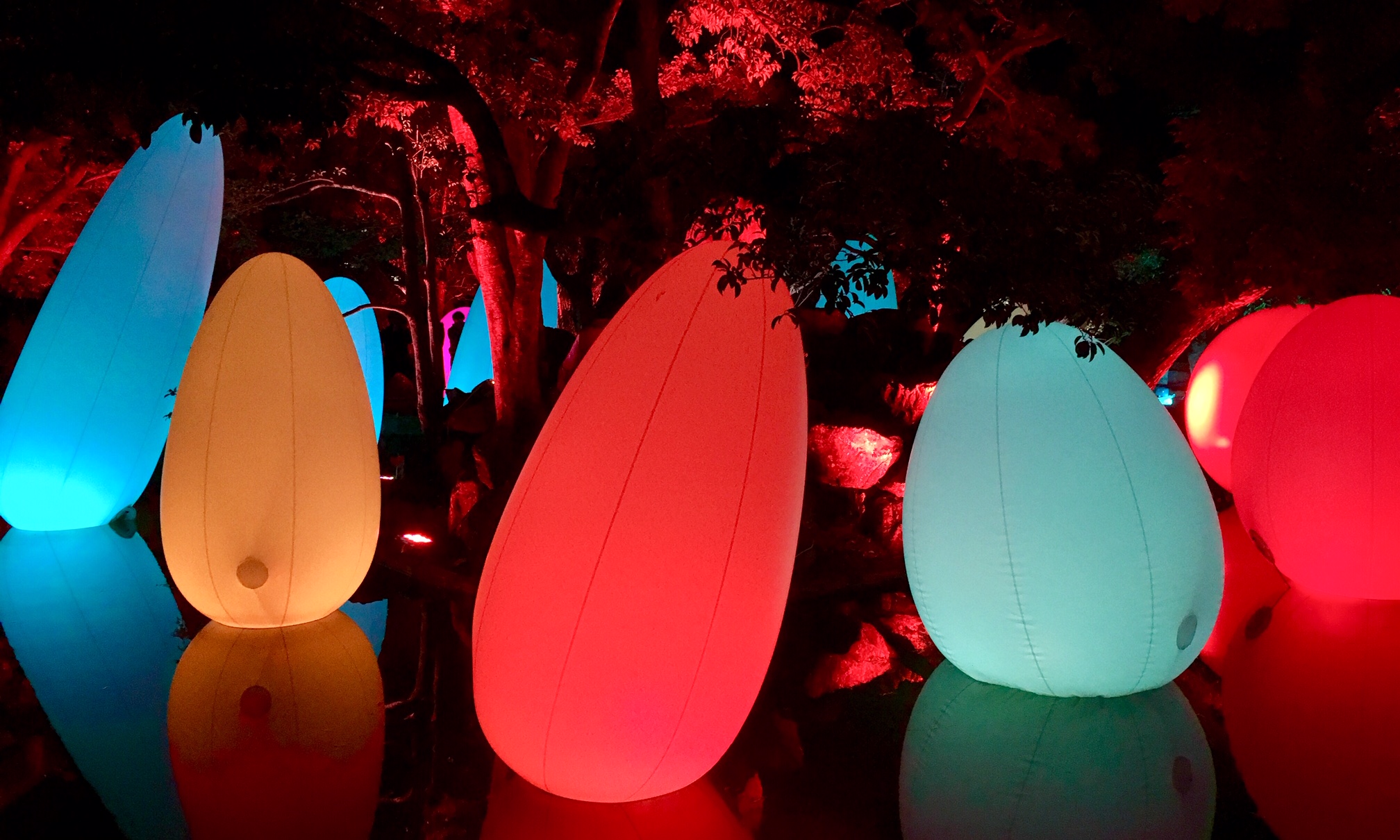 teamLab (and yes, that’s the way it’s capitalized) is an artist’s collective based in Tokyo that bills itself as taking an “ultra-technological” approach to its work. The group was founded in 2001 by Toshiyuki Inoko, a University of Tokyo engineering student. Today the group has grown to over 400 members, and after a string of successes abroad has been winning increasingly large audiences at home in Japan.

In interviews, Inoko has spoken about his early frustration with the “borders” imposed by photography, which was the first medium he took up. Looking at photographs he’d taken of wooded landscapes, they never recreated for him the feeling he’d had playing in the woods near his childhood home in Tokushima. He decided to pursue art without boundaries, that allowed audiences to enter and engage with the pieces. It is also essential to teamLab that their works not permanently alter the places where they are shown. They are temporary, interactive enhancements of a place; not material impositions.

This approach is beautifully on display right now on the grounds of Hiroshima Castle. A nocturnal dreamscape of large, egglike structures (teamLab uses the term “ovoids”, but my eight-year-old immediately identified them as eggs, and you will too) has taken over space within the 430-year-old walls of the castle. Visitors are encouraged to push or tap them, as unearthly, hypnotic music fills the air. When touched, they change color and may also cause nearby ovoids to change color as well, or set up a slow pattern of color changes spreading outward. According to the materials, the advance of a wave of color gives away the presence of other visitors in the area, but on the crowded evening that I stopped by, this effect was undone somewhat by the fact that scarcely an ovoid in the place wasn’t being slapped, prodded or headbutted by gleeful visitors. Despite the crowds (and this was a Saturday night early in the exhibit, so don’t be scared away) the atmosphere was enchanting. In some places, the ovoids are nearly four meters tall and clustered so thickly together that moving through them is like walking through a wobbling, rocking maze. The castle itself is illuminated as well, the colors shifting as feedback is received from the ovoids. And at the rear of the castle, calligraphic shapes and carp float eerily across an ancient stone wall stretching along the moat.

teamLab writes that “the concept behind the project is that non-material digital technology can turn a city into art without physically altering it.” And I’d say they’ve succeeded. People loved it. Old couples moved slowly along the paths, smiling at small children who could scarcely believe their eyes. It’s on until April 7, 2019 and worth a visit.

Access: Hiroshima Castle Grounds, downtown Hiroshima, north of Sogo and Pacela. Entrance is through the east gate, next to the RCC Radio building.

Additional Info: If you enter the space during daylight hours, it’s free, but this is meant to be seen at night.