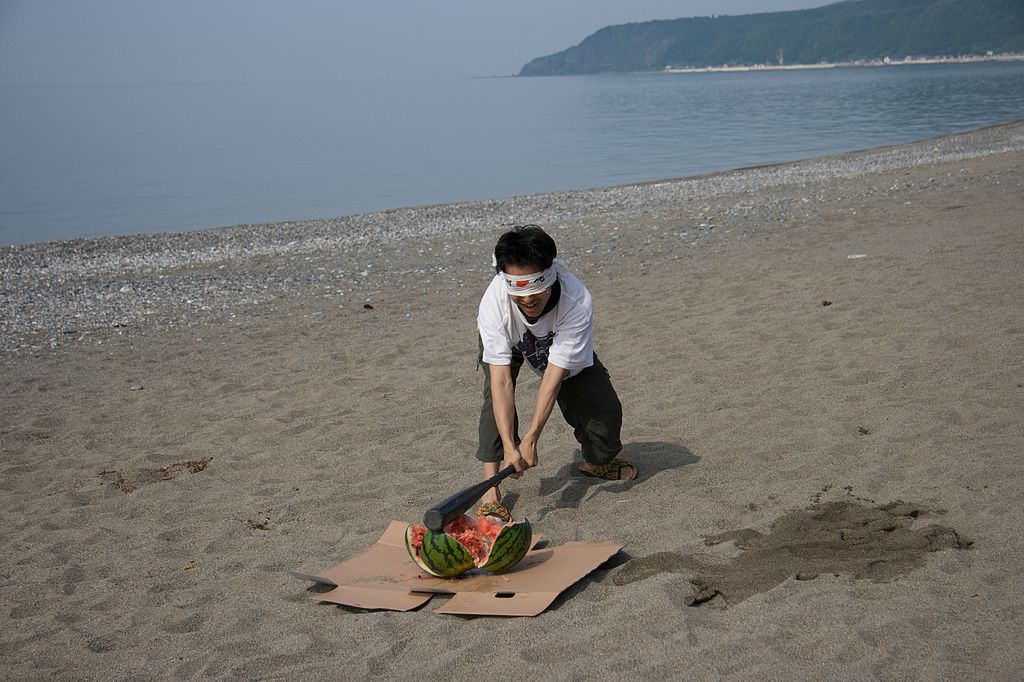 There are so many things you can do for fun at the beach on a hot summer day. Swim in the surf, play volleyball, build a sandcastle, relax on a towel and enjoy a cool beverage, and wiggle your toes in the sand. How about taking a stick and cracking open a watermelon?

Watermelon is one of Japan’s favorite summertime treats so it is not a surprise to find the juicy fruit in abundance at the beach. But taking a stick to the fleshy orbs? That is the essence of a traditional summer game known as suikawari.

The origins of suikawari [(watermelon (suika) + wari (split, divide, cut)] are murky. Some say it is derived from Africa where watermelons are native and grow in the wild. It was customary to split the fruit in prayer for an abundant harvest. Others say that the game is a remnant of ancient Japanese times when melons were used in practicing the art of sword handling.

It is a simple game where the contestant is given a long stick or pole and then blindfolded. The task is to split open the watermelon and directions are continually shouted by accomplices to get the deed done. The game is taken so seriously that in 1991 the Japan Agricultural Cooperative set up the Japan Suika-Wari Association to codify the playing of the game.

An official suikawari game placed the player between five and seven meters from the watermelon and set a standard size for the stick. The player was blindfolded with wraps made only of association-approved material and to ensure that the contestant could truly not see the watermelon, a 10,000-yen note was supposed to be placed in the range of vision as a distraction. The player would be given three minutes to successfully give the melon a good bashing. The winner would be the contestant who came closest to cleaving the fruit exactly in half. There were even stipulations for the judges who were encouraged to have eaten at least 10 watermelons in the current year. Of course, only a well-ripened domestic watermelon – which can be quite pricey – would be used.

The Japan Suika-Wari Association is no more and the game is not usually so serious. Often a game of suikawari commences with the blindfolded player spun around three times, like the Mexican party game of pinata. The fun is in watching the flailing by the player and it is not uncommon to observe compatriots yelling out misinformation to the hapless striker.

Suikawari is not only played at the beach. Any open space with room to swing a pole will do. The ultimate goal of the game is to eat fresh watermelon. Towards this end, it is important to place the watermelon on a piece of cardboard or a towel or something similar so the broken pieces do not tumble into the sand or grass. When the watermelon is properly slain by the suikawari warrior, everyone grabs a piece of sweet fruit and enjoys. That’s the way all the best games end.